I was privileged to be amongst a good-spirited throng of like minded people today in London, each one determined to project the message that the abuse of animals held captive and exploited in ‘canned’ farms for trophies must end now! Many leaflets prepared by the Campaign Against Canned Hunting were distributed to the public on London’s busy streets as the march passed by.

I don’t think it was lost on anyone (public included), that Cecil’s sickening and unnecessary demise (may he RIP) has been a clear catalyst for a growing ground swell campaign – a campaign once again, calling for the abuse of all creatures ‘canned’ in farms and ‘Bred for the Bullet’ to end, plus simultaneously protecting the dwindling wild populations at risk from the Trophy Hunters’ and poachers’ abuse. 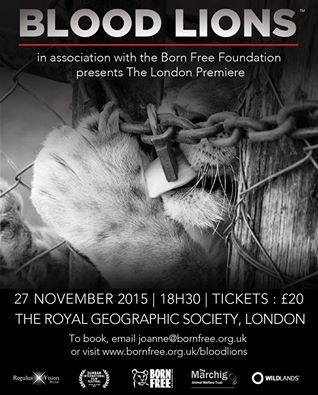 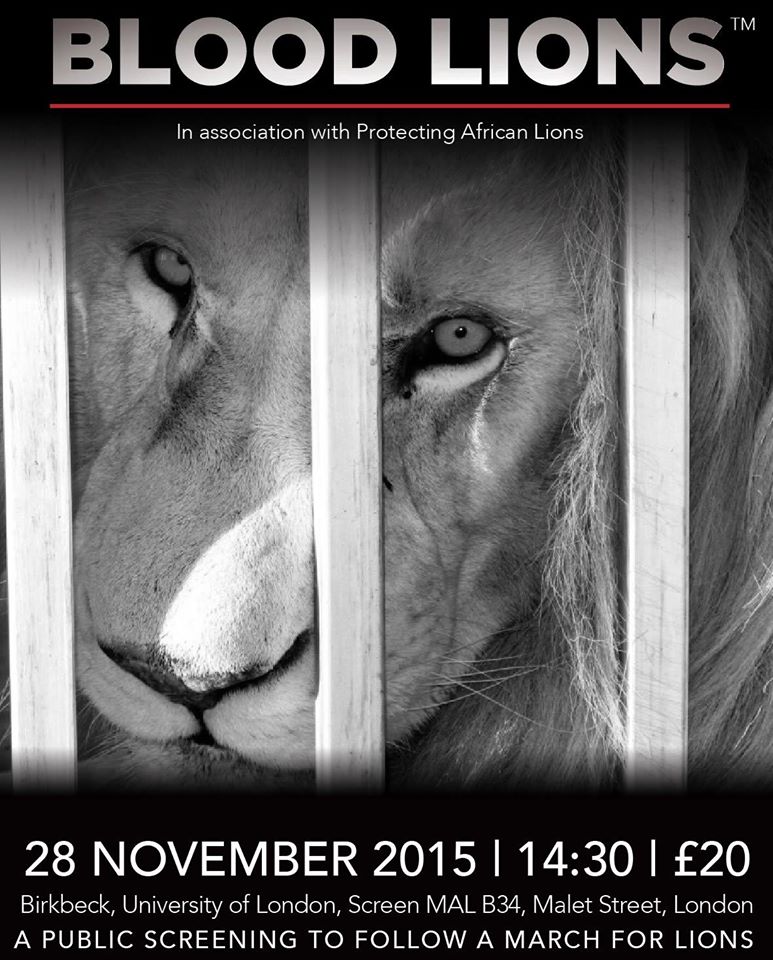 ‘Blood Lions‘ also screened in London this weekend – The Royal Geographic Society on Friday was a well attended and emotional event, the impact of the big screen and Blood Lions’ message was overwhelming………The panel discussion that followed, chaired by Will Travers (The Born Free Foundation), with Ian Michler and Pippa Hankinson (Blood Lions), Dr Pieter Kat (Lion Aid), Dr Andrew Venter (Wildlands) and Michaela Strachan) was thought provoking and insightful. Audience participation was informed and lively, from many including Roger Cook (of ‘The Cook Report’ that highlighted the ‘canned’ industry in the 1990s), who urged all to maintain the current campaign’s  momentum and not let the chance to make a lasting impact on the ‘canned’ industry pass by;  Virginia McKenna spoke eloquently and passionately, plus many more informed questions and comments……”thank you.”

I urge anyone to see Blood Lions and spread the message it contains – The deceit inherent in the whole chain, from the ‘mass-produced’ cubs hand-reared by deceived volunteers, through to the abhorrent (to quote Dr Pieter Kat) “pre-meditated murder/execution” of the ‘canned’ animals by the ‘amateur hunting enthusiast.’ Blood Lions exposes the hunters’ mentality, with footage from the Safari Club International’s (SCI) annual Las Vagas convention (“Ultimate Hunters’ Market“) and the thin veil of self-delusion these ‘hunters’ (and the traders that pander to them) hide behind to justify their blood lust, exploitation and profiteering as some twisted notion of ‘conservation.’

“If we want to protect threatened species for future generations to see and enjoy, urgent action is required. Our ‘campaign’ has a momentum that must be grasped and maintained, with the chance to sway power and opinion away from the hunters $$$, self-deluded claims and the deceit of the profit driven hunting industry. The wider big picture favours general tourism as the dominant African economic driver in comparison, with that ‘general tourism brand’ under threat from the tarnished, hunting industry’s deceit and wanton animal abuse.”

“Please keep campaigning to end that abuse – together, we can make a difference!”