Banner: Courtesy of SanWild, picture of a rhino killed by poachers for its horn

On 26 November 2015, South Africa’s, Pretoria High Court ‘approved’ a challenge by two rhino farmers (John Hume and Johan Kruger) to sell their stockpiles of ‘harvested’ rhino horn, overturning a 2009 moratorium on such trade.

Note: For those not familiar with John Hume’s rhino harvesting approach, this has been previously summarised and attached at Appendix 1 below. I can assume (until further study is undertaken), that Johan Kruger’s approach is identical.

The 2009 moratorium was overturned in the High Court on a convenient “technicality” that the moratorium had not been well advertised to the public and lacked ‘public consultation’ – so this “oversight” has been taken as a potential ‘self-approved’ South African route to defy the standing Convention on International Trade in Endangered Species of Wild Fauna and Flora (CITES) ban on commercial trade in rhino horn.

In the latest twist, it has been reported  that South Africa’s Supreme Court of Appeal (SCA) has legalised the ‘internal’ commercial trade in rhino horn:

“The lawsuit brought by two South African rhino ranchers to invalidate the country’s rhino horn ban is upheld, and the government’s appeal is denied.“

“International trade in rhino horn has been banned since 1977 among the now 182 member countries of the Convention on International Trade in Endangered Species of Fauna and Flora (CITES), the body that governs international wildlife trade.”

“But CITES covers trade between countries; it does not apply to trade within a country’s own borders. South Africa, home to the world’s largest rhino population, and nearly all of the world’s 20,000 white rhinos, allowed domestic trade in white rhino horns until 2009. That year, in response to a rise in poaching, the government imposed a moratorium, shutting off the internal South African rhino horn business” – National Geographic, 23 May 2016

“Given the levels of corruption in some provincial permitting offices, there are certainly concerns that legal domestic sales could become a conduit for criminal networks to obtain horns which can be smuggled out of the country and sold on the black market. We saw as much prior to 2009 when middlemen for Vietnamese syndicates travelled the length and breadth of the country buying up ‘loose stock’ of horns from game farmers” – Julian Rademeyer, a senior fellow at the Global Initiative Against Transnational Organized Crime

Leading independent economists  have clearly demonstrated that any increase in ‘legal’ (and ‘illicit’) rhino horn trading could stimulate demand and increase rhino poaching risks – “We find that a legal trade will increase profitability, but not the conservation of rhino populations” –  Journal for Nature Conservation (Published October 2015 version available at cost/subscription), By Douglas J. Crookes, James N. Blignaut (Department of Economics, University of Pretoria).

On 21 April 2016, the South African Government rejected the call to forward a proposal to CITES seeking approval for international trade in harvested rhino horn.

“if Swaziland wins the right to export rhino horn on the international market then South African ranchers could quite easily send live white rhinos to Swaziland and then harvest the horns there. This is possible because both South Africa and Swaziland maintain an exception to CITES’s rhino horn trade ban. The exception allows them to export live rhinos to “appropriate and acceptable destinations,” an undefined phrase that stands as a potential loophole” – National Geographic, 23 May 2016

So, if Swaziland wins approval at CITES CoP17, then the flood gates will truly be opened, rhino horn demand could spike exponentially and the precarious existence of the wild rhino placed on the precipice of extinction sooner, rather than later.

“The government has not revealed the size of its rhino horn stockpile, but the PROA estimates its members have around 6 tonnes and reckons the state has close to 25 tonnes. The combined 31 tonnes could fetch $2 billion by some estimates” – Reuters, 23 May 2016

In South Africa it seems, the law (and working in cahoots with neighbouring states) can always be conveniently manipulated when there is “profitability” in the air (never mind the conservation risks presented to precious wild rhino). 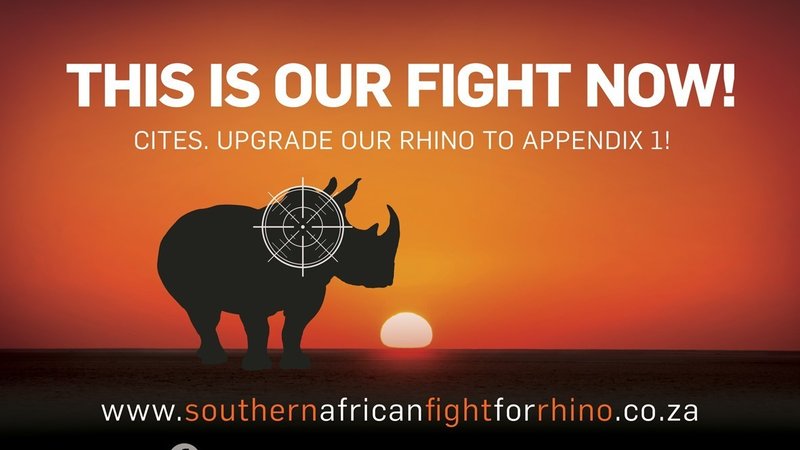 South African Petition – “CITES, Upgrade our rhino to Appendix I“

Event Page  “CITES, Upgrade our Rhino to Appendix I”

The South African farm owned by John Hume has the largest privately owned rhino herds in the world.  The farm harvests a rhino’s horns under ‘safe and painless’ anesthetised conditions, after which the rhino is released back into the farm’s protection. The rhino’s horn eventually grows back after about two years. The harvested horns are micro-chipped and currently stock-piled in a very secure vault. Under South African law only rhino horn extracted by a permit (concession) Trophy Hunt, can the resulting rhino horn ‘legally’ be exported.

Legalising the rhino horn trade may be one of the approaches that helps reduce poaching. In theory, ‘legal’ farm supplied rhino horn being released from stock-piles to meet demand will mean that prices paid will fall, thus making poaching less viable, plus making farms like John Hume’s more commercially viable. Changes to the governing law are being mooted in the South African government. There are several different options for extending the ‘legalised’ trade in rhino horn:

On John Hume’s farm, the rhinos’ existence is perhaps rather ‘synthetic’ but better than no existence. However, under the current climate, even on John Hume’s farm the rhino are not safe from poachers, with regular incursions.  Either way, there is no doubting the human ‘commoditisation’ or ‘canned’ business opportunities presented by the plight of the rhino.

In terms of rhino horn, then harvesting the horns (in a sustainable way, that doesn’t kill the ‘donating’ rhino) and allow legal export from farms ‘might’ help reduce illegal poaching, but what sort of world is that we are condoning?

Note: The ‘economic’ models say rhino horn harvesting has a high likelihood of increasing profitability, but a low likelihood of actually helping ‘conserve’ rhino(5) . Furthermore, the pro-harvested rhino horn trade supporters (Governments, economists and conservationists) ‘who think they can curb poaching by selling rhino horn and ivory legally have little understanding of macroeconomics or the sophistication of international crime syndicates(6,7)‘.