There is a rhino, a bull White rhino around 10 years old, on a game/rhino farm somewhere in South Africa. The rhino’s nickname is ‘Big Boy’ and he’s in his prime.

Big Boy’s actual location is unknown to outsiders, to ensure his whereabouts in his current environment remains as safe from human harm as possible – no one wants to risk anything that could potentially scupper Big Boy’s hopes of rescue. Big Boy’s owner/famer is perhaps under pressure to gain back some return from his dwindling rhino stock, losing too much stock to the merciless scourge of poachers – regardless, it seems it’s time to move on the remaining ‘stock,’ including Big Boy.

For $15,000, Big Boy can be purchased and taken into the relative safety of SanWild’s Sanctuary. Alternatively, Big Boy (like many White rhino in South Africa and Swaziland) could perhaps be ‘legally’ sold as a hunting trophy, or exported. Under South Africa’s (and Swaziland’s) CITES Appendix I exemption, White rhino trophy hunting and live specimen exports of White rhino populations is ‘legal.’

Is Big Boy’s dichotomy blackmail of those that believe every rhino is precious and that the hunter’s ‘pay to kill’ model and claimed conservation is unethical and immoral? When Big Boy is saved, which other rhino will be wheeled out in his place for a hunter to kill? As that debate rumbles on, the clock is ticking – there is a limited window of opportunity to raise the necessary funds to save ‘Big Boy’ from potential execution (for cash) by a hunter’s bullet(s), or another fate perhaps.

We have seen in the past, animals from the vulnerable, or endangered species list offered for sale as either a ‘legal’ hunting trophy, or to anyone who has authority approval to take that same target animal –  hopefully, into a safe custody to live, breath and contribute directly to species’ survival for the rest of its natural life.

The argument that the hunter pays enough to contribute to species’ survival when the hunter “sacrifices one, to save the many” is the common mantra hunting advocates proclaim. Of course the hunter could just give the money for conservation and not kill……..but either way, the argument is that the hunters’ approach is morally/ethically unacceptable when applied to our own species (for poverty reduction for example), so why should it be acceptable when applied to any other species? It’s not.

There is a ‘movement’ (perhaps that’s not the right word) pushing towards a concept of “fortress conservation.” SanWild Sanctuary has its own “fortress” proposals underway in Limpopo – taking precious species into well prepared habitat, exclusively for the use and protection of that precious wildlife. No invasive human interaction is proposed; these will not morph into income generating tourist attractions disguised as ‘conservation,’ or habitat ‘saved’ by hunters, but the same habitat’s inhabitants regularly “harvested” in the name of ‘conservation.’ No, these will be fortresses in every sense, heavily fenced areas with enhanced technology (such as motion detectors on the outer perimeter) to prevent any merciless poachers’ intrusion, guarded to ensure the wildlife within is as safe as possible from unnatural, human exploitation.

This is not some new government or authority strategy, but primarily a private/NGO initiative, but one that is perhaps gaining a wider groundswell of social uplift. There’s potential for international Development Funding and corporate donor backing, with the prospect of a wider social commitment to such “Fortress Conservation” initiatives. This concept was also raised at the ‘Cecil Summit’ (Panthera and WildCRU), 7 September. The United Kingdom Development Fund Minister, Rory Stewart MP participated in the summit and the hypothetical discussion to preserve exclusively for wildlife some 1.2m sq.km (estimated) of current land ‘set-aside’ (parks, hunting concessions presumably etc.).

However, it’s not clear how Panthera’s and WildCRU’s tacit support of ‘hunting as a tool for conservation’ could be balanced by any conservation ‘fortress’ funded by tax-payers’ input, based on some overwhelming wave of a newfound social conscience that wants to conserve vulnerable and endangered species in a massive, scaled-up, fortified, land-based ‘Noah’s Ark.’ How could the hunters’ be ‘entertained’ within such a ‘fortress’ and the notion that the hunters’ corruption and blood-lust will not pollute the ethics of any such international, tax-payer funded preserve?

Any “fortress conservation” is a potential worthwhile ‘banker’ option in case the forces still pushing wildlife utilisation as some kind of panacea does not succeed (this panacea is a delusion the multitude do not seem to share).

CITES’ motivation/purpose is in maintaining trade in endangered species, trying at the same time to justify how it thinks sustainability can also be balanced with that overriding trade imperative – CITES is not a conservation body, it never has been. This ‘balance’ has clearly not worked for ivory trading and projected elephant population stability; can the continued “harvesting” of lions ‘approved’ by CITES reclaim the species’ survival prospects in the wild when the lion bone trade is perhaps set to explode as a bonanza for poachers and the ‘legal’ beneficiaries of such wildlife utilisation theory? I doubt it.

A very comprehensive report was submitted to CoP17, entitled “African and Asian Rhinoceroses – Status, Conservation and Trade – A report from the IUCN Species Survival Commission (IUCN SSC) African and Asian Rhino Specialist Groups and TRAFFIC to the CITES Secretariat pursuant to Resolution Conf. 9.14 (Rev. CoP15).” It gives much analysis (where data is available) of the rhino-trade, poaching, hunting and ‘pseudo-hunting’ (where the ‘hunt’ is orchestrated to gain access to rhino horn for onward, illicit use) that has happened up to this point.

Some third-party analysis of CITES’ Trade Database has also revealed South Africa’s reported trade in some 9,419 White rhino between 1980 and 2015: 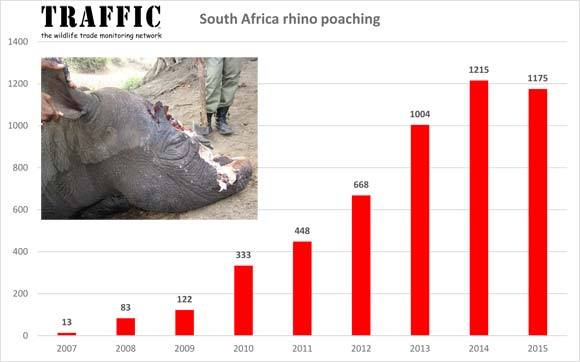 When we look at the rhino’s plight, what happens next? Legal trade in harvested, farmed rhino horn has perhaps been put on hold for a while, but the trade in rhino hunting trophies from ‘legal’ hunts (some are ‘pseudo-hunts’ and a mere disguise for obtaining rhino horn) continues, as does live exports of rhino specimens.

There is obviously still open trade in rhino horn ornaments and so-called rhino horn derived medicinal remedies in Asia – but there is no doubt that South Africa’s Department: Environmental Affairs is working towards getting its own house in order before making a CITES Proposal to legalise trade in harvested rhino horn to add into the mix, perhaps with a submission to CITES, CoP18 in 2019. The Department: Environmental Affairs (DEA), The Republic of South Africa, “The viability of legalising of trade in rhino horn in South Africa,” (2014) Recommendations makes this additional rhino trade strategy crystal clear:

“At the present time, therefore, South Africa should keep the moratorium in place. However, this should not be considered a long-term solution because rhinos are being poached at an ever-increasing rate, and the national moratorium is doing nothing to relieve this. In fact, the restrictions created by the local trade ban may be exacerbating the poaching problem.”

“Taking into account the facts that the mechanisms for controlling a legal trade in South Africa are not yet in place, that the number of rhino horns in private stockpiles are uncertain, and that some private rhino owners are not yet compliant with permitting regulations, it is likely that lifting the moratorium at the present time will lead to laundering of illegal horn into legal stockpiles as well as smuggling of horn out of the country. These acts would tarnish South Africa’s reputation with CITES Parties and could jeopardise future attempts to legalise international trade in rhino horn“

There is academic evidence that says such trade (be that harvested rhino horn, synthetic rhino horn, ivory etc.) interventions to try to influence illicit markets for the better are based on simplistic economic assumptions, often driven by a profiteering mentality and ‘hope’ that there might be some positive benefits for the donor species. At the very least, such an approach might increase profit taking, but is unlikely to help save wild rhino species’ survival.

The argument is also extended that the ‘legal’ trade provides routes for illicit infiltration, plus any trade sends the message that wildlife is there as a commodity to be utilised and benefited from (no matter what the stated ‘conservation’ or ‘good intent’ may have been). 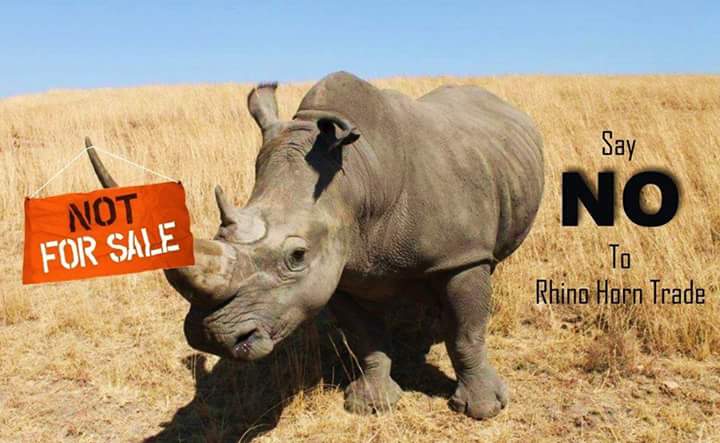 In the meantime, Big Boy waits to be saved, or shot – for him, there is no time to wait whilst we humans continue to debate. Big Boy’s fate, live or die can only be decided right now by you and me.

“A phenomenal achievement for Big Boy, an extraordinary effort by a small group of dedicated and committed individuals to achieve the impossible. This is the story of Big Boy’s rescue.

From our side, we would like to extend a huge thank you to each donor that collectively made it possible to spare a beautiful rhino bull a painful and excruciating death in a planned trophy hunt. We stand overwhelmed by your passion, love and commitment for rhinos.

Big Boy will live as a direct result of your efforts and all that remains is for us to go and fetch him. It is a good day to celebrate.

Today I will be flying out to make all the necessary arrangements and with the help of a game capture team, wildlife veterinarian and transportation contractor we will relocate Big Boy to an intensive protection zone where he will be joining other rhinos that have all survived poaching incidents. I trust that by the end of the week he will be home safe and sound.

Congratulations to all. I would like to thank Jason Gunn Burton and Nats Stockenström for helping to generate public interest to make this happen. I would like to thank good friends that worked behind the scenes to locate Big Boy and secure a legal contract to purchase him. If we did not have your help we would never ever have found him. Sorry I cannot name you, but we will need you in the future to help secure other rhinos like Big Boy and I know you will be okay with not being named.

To our donors, a special thank you and my personal appreciation. Saving a rhino is very special indeed. On the ground, we experience so much death by poaching on an almost weekly basis and this systematically breaks you down and leave one with a sense of despair and hopelessness. Too much rhino blood has stained the African soil and I cannot tell you how it feels to know that together, and with your help and love, Big Boy’s heart will continue to beat for a very long time. You simply made my day!

I would also like to thank my Lord for bringing us together for this rhino’s sake. On a personal level, I know that without Him we would not have achieved this miracle in such a short space of time. I also believe Big Boy was sent to bring a message of hope and to prove to everyone that took part in the amazing effort, that we can help save rhinos even if it is only one at a time.

I will be in touch a bit later this week at which time Big Boy will be home.

Lots of love to you all and thank you!” – Louise Joubert, SanWild Sanctuary