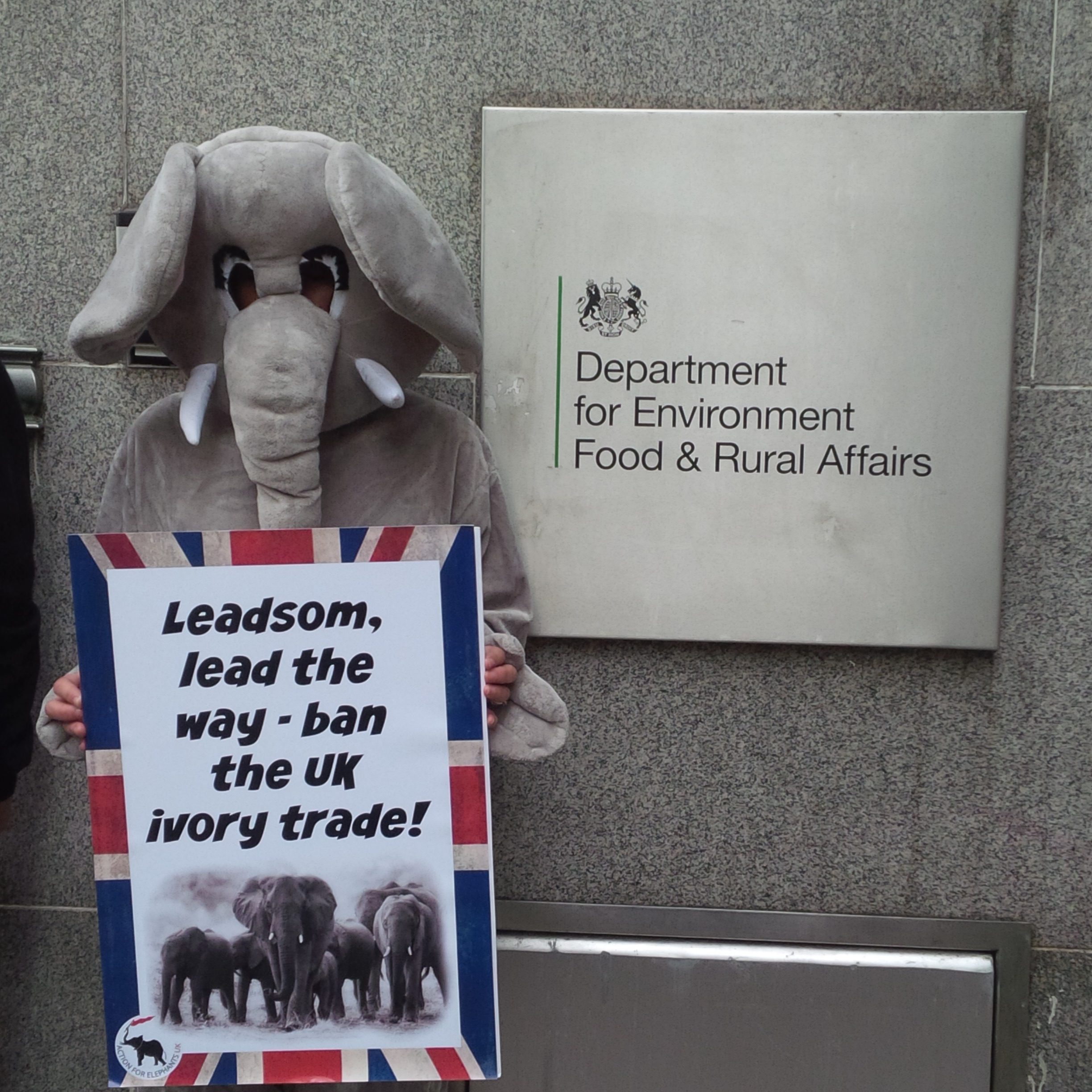 On Wednesday, 16 November 2016, Action for Elephants UK organised a gathering outside of the Department for Environment, Food and Rural Affairs (DEFRA) in Smith Square, London. The clear message sent to Secretary of State, Andrea Leadsom was “save the elephants, ban the UK ivory trade.” A letter (given at Appendix 1) was hand delivered on the day.

There is more than anecdotal evidence that the ‘legal’ UK ivory trade (“Antique” – worked ivory, pre-dating 3 March 1947) is being infiltrated by “pre-Convention” (1975/1989*) ivory and recently poached “Modern” ivory prices. The only safeguard to any such illicit infiltration to the ongoing ‘legal’ ivory trade is the United Kingdom antique industry’s own adherence and self-regulation to a large extent, with a heavy reliance on the ‘expert appraiser’s’ eye to assess any given ivory piece’s authenticity as “Antique.”  Of course, modern science could be applied (such as carbon dating), but that is a costly exercise and one that meets resistance for smaller, less valuable pieces that the antique industry desires to market.

However, The British Antique Dealers’ Association (BADA), British Art Market Federation (BAMF) and  similar bodies, only to seek to ensure  ‘adherence’ from their members. This membership does not include the vast United Kingdom wide myriad of shop, stall and internet based ivory traders.

In August 2016, TRAFFIC (the wildlife monitoring network) published a report titled “A Rapid Survey of the UK Ivory Markets.” 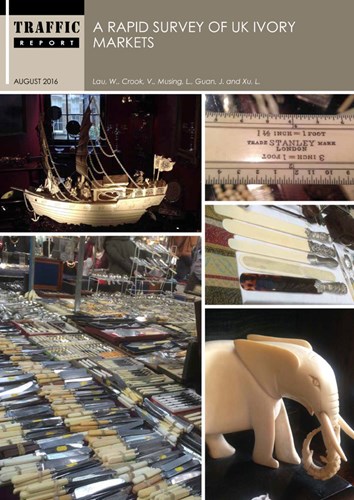 “A Rapid Survey of the UK Ivory Markets,” TRAFFIC, August 2016

TRAFFIC’s own summary of their report concludes that links between the UK ivory trade and the current elephant poaching crisis “appear tenuous at best.” However, TRAFFIC identified that the current UK ivory market buyers reported in 2016 by traders were predominantly “travellers and citizens from East Asian countries and territories, including mainland China, Japan and Hong Kong,” so the potential implications are anything but tenuous:

The UK ivory trading industry is perhaps sill in denial (Reference “Ivory protestors descend on Westminster as Stephen Fry lends support to trade ban,” Antiques Trade Gazette, 16 November 2016) that there can be any ‘negative’ impact on today’s living elephants from continuing to seek to trade “Antique” ivory.

At best, TRAFFIC’s “A Rapid Survey of the UK Ivory Markets” appears superficial. The report  glosses over any scientific carbon dating analysis to support its conclusions on the stalls and markets its researchers did survey (by eye) – no items were purchased for further scientific examination by TRAFFIC’s researchers “due to funding and time restraints, the current survey did not involve further in depth investigation/research into traders or items for sale.”

TRAFFIC’s report also failed to adequately analyse the United Kingdom’s on-line ivory market apart from looking at ivory items “for sale on UK-based antiques and auction websites, to complement the results obtained during the physical market survey” – how exactly were these items actually ‘appraised’ for authenticity as pre-1947? By ‘trust’ in the trader’s/vendor’s description alone presumably.

For United Kingdom ivory trading to have any credibility in light of Hugh Fearnley-Whittingstall’s findings (where 66.67% of ivory items physically purchased in the United Kingdom and actually analysed in detail, were found to be illegal), TRAFFIC (or similar) needs to be funded to do much more in-depth, scientific research.

It must be borne in mind that TRAFFIC is supposed to assist and help the decision-making processes at CITES. On 5 October 2016, CITES issued a draft decision for all 183 Parties (including the United Kingdom) which:

“RECOMMENDS that all Parties and non-Parties in whose jurisdiction there is a legal domestic market for ivory that is contributing to poaching or illegal trade, take all necessary legislative, regulatory and enforcement measures to close their domestic markets for commercial trade in raw and worked ivory as a matter of urgency” – CITES issued a (draft) decision  (CoP17 Com. II. 6) regarding ivory trading – “DRAFT DECISIONS AND AMENDMENT TO RESOLUTION CONF. 10.10 (REV. COP16) ON TRADE IN ELEPHANT SPECIMENS.”

Some countries are resisting this CITES recommendation. Even within Japan (reference “The struggle over Japan’s ivory market“), there is a rising tide of public pressure to close Japan’s internal ivory market, dropping the self-delusion that Japan’s ‘regulated’ market is immune to illicit infiltration.

On 11 September 2016, the  IUCN, Motion 007 called for the “Closure of domestic markets for elephant ivory:“

Until there is a much more comprehensive, scientific based study of the entire United Kingdom’s ivory trading activities, then there is not conclusive proof that it’s not “contributing to poaching or illegal trade” and indeed deserves to be labelled as having “a clean bill of health” (sic) in any shape or form.

In the absence of conclusive, scientific based proof, at the very least a moratorium on all ivory trading in the United Kingdom (as elsewhere) is due, as recommended by CITES.

If the United Kingdom can show leadership by example, perhaps key ivory markets in Japan and other Asian nations will follow suit and shut their  domestic trade (gradually leaving nowhere for the illegal trade of “Modern” ivory to ‘hide’).

The 2015 Conservative Party Manifesto (page 55) pledged to “tackle international wildlife trade” with a promise to “press for a total ban on ivory sales.” Now is the time for that “total ban” on the United Kingdom ivory trade.

The hiding of the United Kingdom’s antiques industry behind superficial surveys, reports and the ivory appraiser’s eye as an “infallible” (sic) safeguard is a delusional fallacy. The ongoing United Kingdom ivory trade is in clear denial that its actions could even theoretically have negative onward consequences for today’s elephants – no claims of a “a clean bill of health” (sic) will stand up to future scrutiny if the elephant species is pushed further to the precipice of extinction to meet the perpetuated desire for ivory.

Ivory Trading in the Media 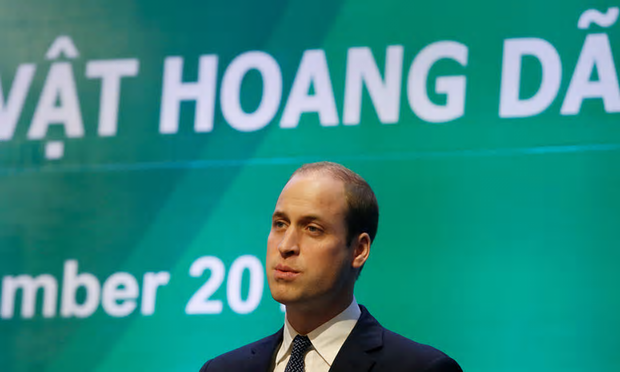 Prince William – Why are we still trading ivory? – Picture courtesy of KHAM/Reuters

At the wildlife conference in Vietnam (17 November 2016), Prince William said: “Ivory is not something to be desired and when removed from an elephant it is not beautiful…..Why are we still trading it? We need governments to send a clear signal that trading in ivory is abhorrent” – BBC News, 17 November 2016 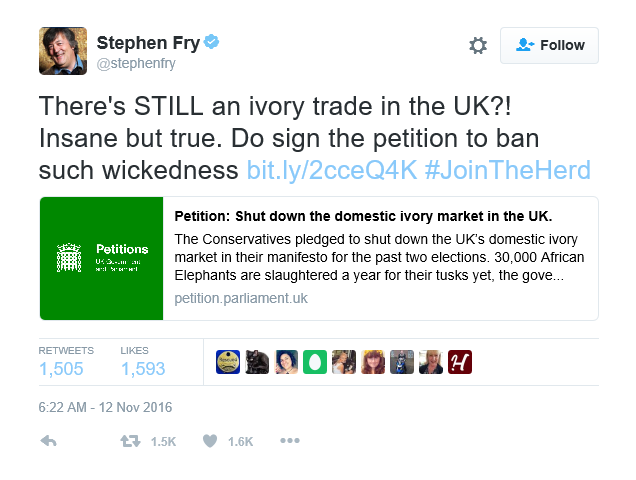 * “pre-convention” – Within the EU(8) this means the 1989 CITES/EU Wildlife Trade Regulations ban implementation date in the Country/State where a given “worked” or “raw” ivory item was acquired, but in CITES terminology , “pre-Convention” means pre-CITES “Convention,” when CITES came into being in 1975, (hence, why 1989 is the antique market’s  preferred benchmark);

We are a grass-roots advocacy group for elephants and are here at DEFRA today to call on the UK government to implement a full ban on the domestic ivory trade.

The Conservative Party pledged in its election manifestos in 2010 and 2015 to ‘press for a total ban on ivory sales’. It is now six years since the original promise was made and your party has failed to implement it. Within those years, over 144,000 African elephants have been poached for their ivory. Unless this slaughter is brought to an end, elephants in the wild may be heading for extinction in 20 years or less.

The UK is currently Europe’s largest exporter of carved ivory to Asia. Significant amounts of ivory are also sold through online marketplaces in the UK. As long as such marketplaces exist, they will continue to perpetuate the cycle of supply and demand that fuels poaching.

The UK antiques trade is disingenuous in questioning the link between the sale of old ivory and current poaching. It has been clearly proved that recently poached ivory is being sold in the UK under the cover of a legal trade. Most recently, Hugh Fearnley-Whittingstall showed in his BBC investigation into the international ivory trade that illegal ivory is being sold in the UK, and that this fuels the ivory trade in other markets. Furthermore, it is impossible to monitor and check every ivory item sold in all the auction houses, markets, fairs, and online in the UK, and to carbon-date them all for proof of age. Nor can the law rely on antique dealers’ experience, as it is also proven that methods for artificially ‘aging’ new ivory can fool even the experts.

It’s time to close the loopholes, and not let the commercial interests of a small group take precedence over the survival of this remarkable species.

In September 2016 the government announced it would crack down on the sale of ‘modern’ ivory, while still allowing the sale of pre-1947 ivory. This half-measure will not stop the trade, and sends completely the wrong message domestically and internationally that it’s ethically acceptable to trade ivory. Given what we know of the catastrophic collapse of elephant populations in recent years from unprecedented levels of poaching, a complete and global ban on ivory is the only chance for their survival.

At the recent CITES CoP17 conference in Johannesburg, delegates adopted a resolution which recommends that all countries with a domestic trade that’s linked to illegal international markets should close their domestic markets as a matter of urgency’. Why is the UK government not throwing its full weight behind this resolution?

With evidence that ivory from the UK is sold into the markets of Asia, both stimulating and providing potential cover for freshly poached ivory, we call on the government to announce a total ban on the UK ivory trade, including pre-1947 ivory, at the upcoming Hanoi Conference on Illegal Wildlife Trade.

It’s time for the government to fulfil its manifesto pledge and commitment made at CoP17 to shut down the domestic ivory trade immediately.

We look forward to your reply. 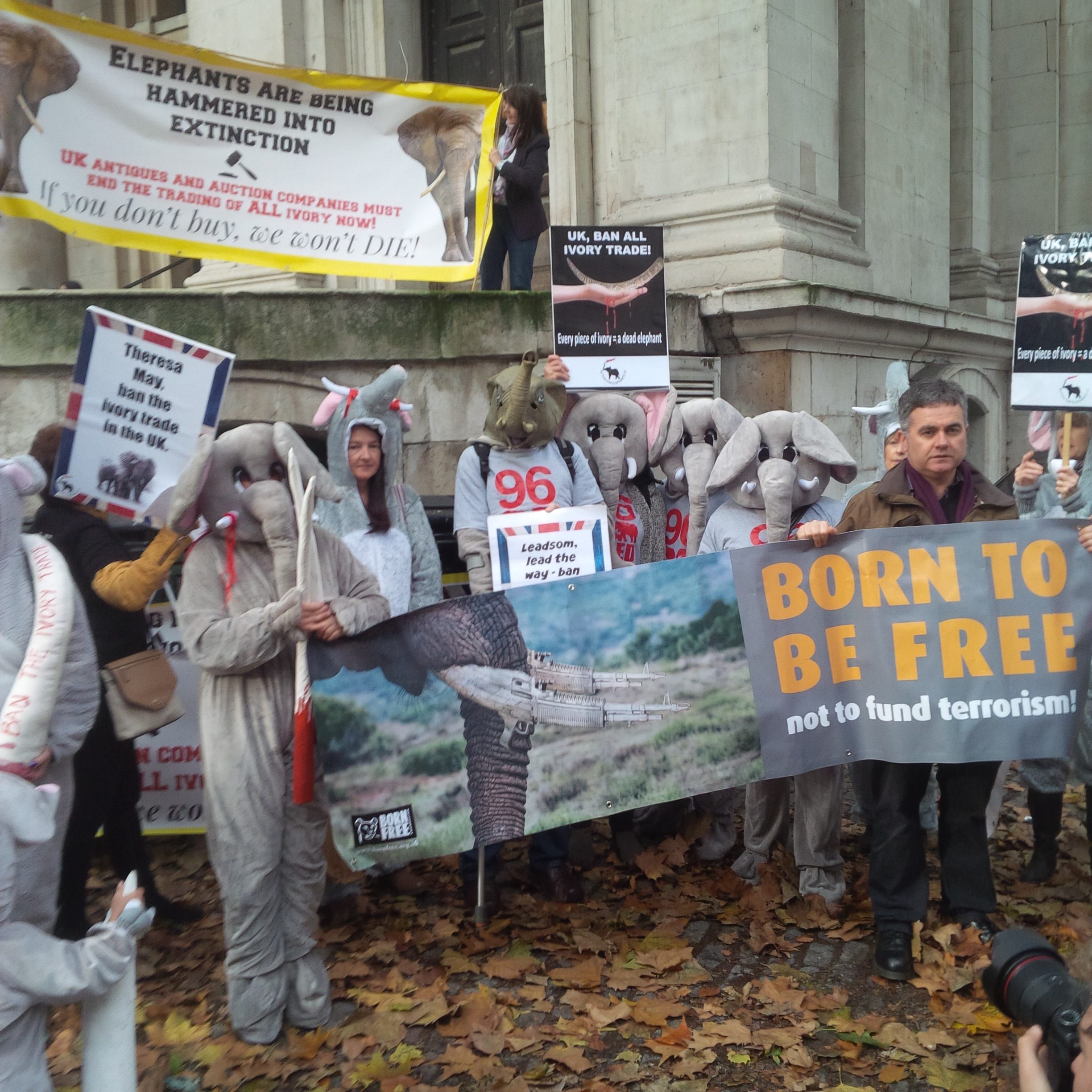 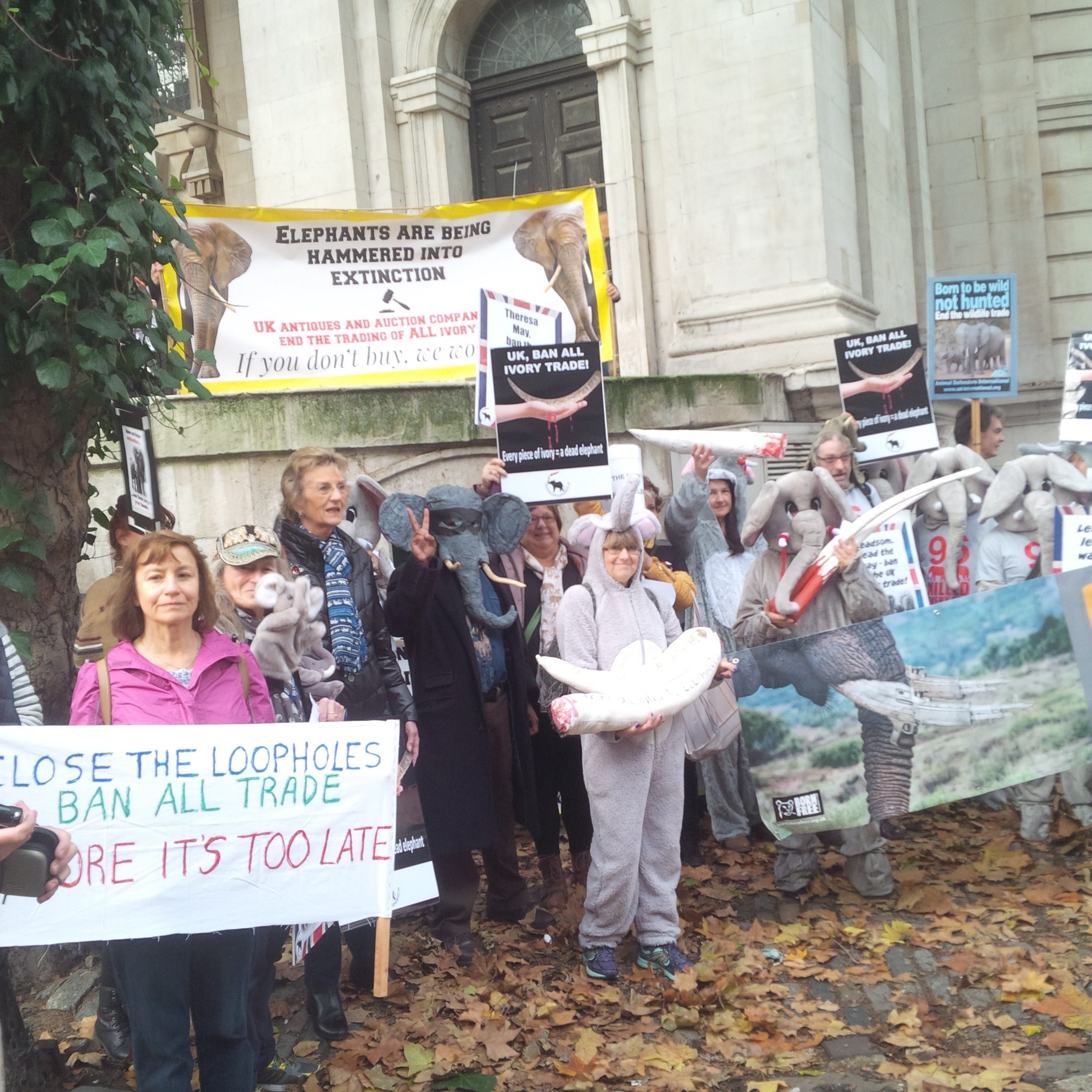 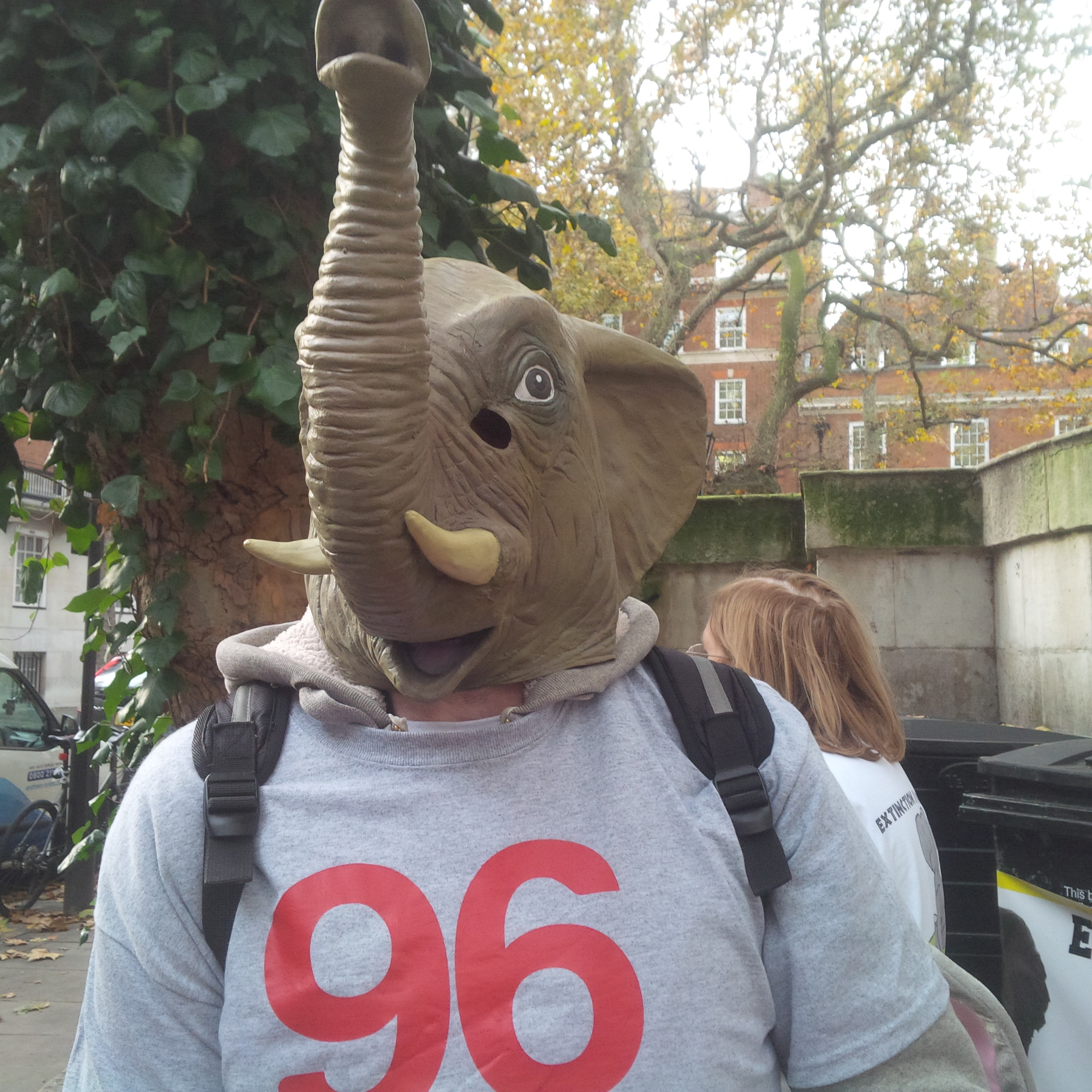 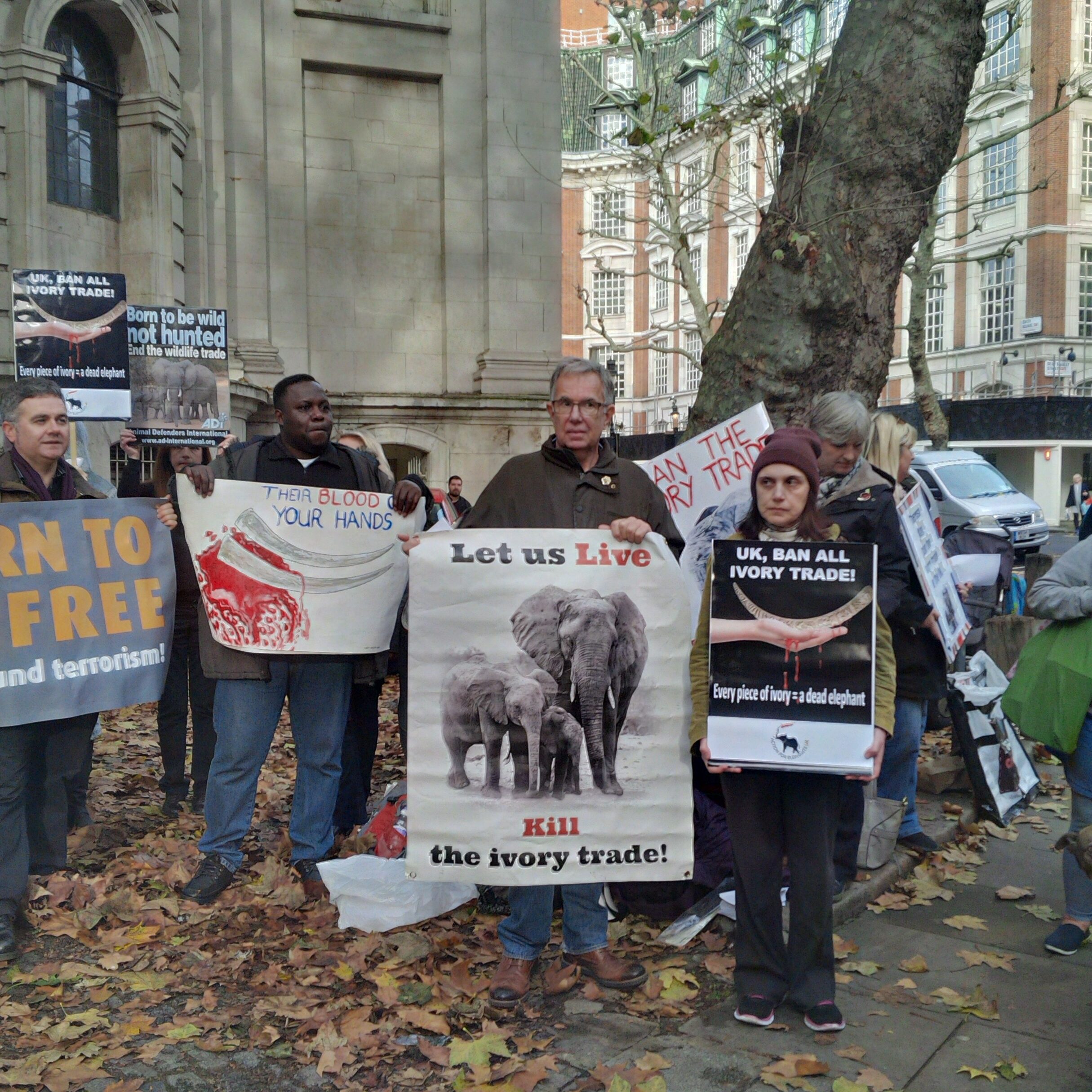 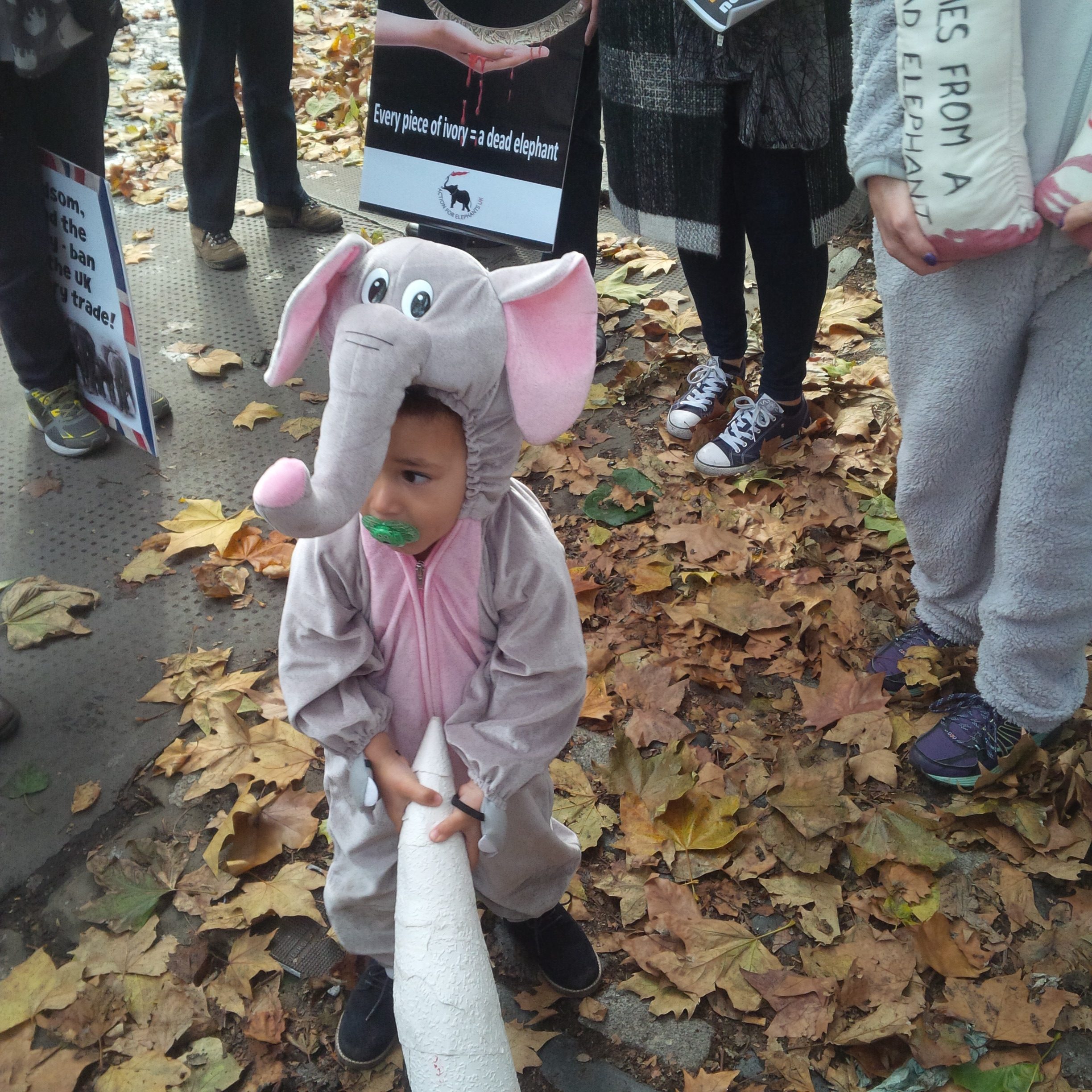