Well, let’s start by saying the summary given to the Minister with regard to Captive Lion breeding highlights the disarray and contradictions the abhorrent ‘captive’ industry represents – also reference the PowerPoint presentation “Briefing on the implementation of the resolutions of the colloquium of captive lion breeding,“12 March 2019:

“The Minister said that with regard to animal welfare, there would be an interaction with the SPCA to deal with areas of the Animal Protection Act and captive breeding facilities“ 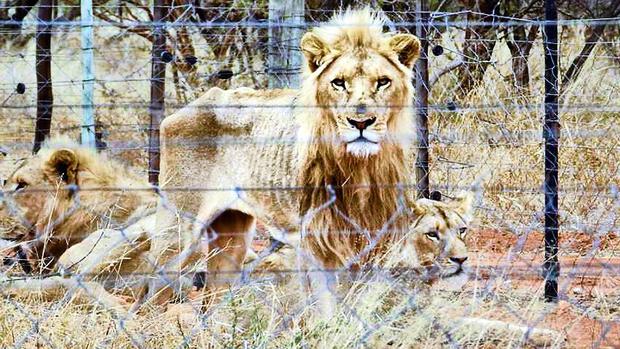 “On the case involving the NSPCA, she [Ms Boshoff, Deputy Director: DEA] said that it [NSPCA’s the legal challenge] sought to set aside the 2017/2018 quota, and the hearing was scheduled for 2 May 2019“

However, “for 2019, the Scientific Authority would engage in public consultation before making the recommendation” – but without any proven conservation imperative, that quota should be zero.

The proposed ‘High Level Panel’ (Gazette 42247) is being formed by the Department of Environmental Affairs to “review policies, legislation and practices relating to matters of elephant, lion, leopard and rhinoceros handling, management, breeding, hunting and trade.”
However, there is no guarantee on how the proposed panel will operate in reality, or how any panel member’s commitment to “the objectives and principles of conservation and sustainable use” will be tested and potentially manipulated – an HLP member’s reputation could be misused to prop up majority support for panel decision which are biased towards ‘sustainable utilisation’ doctrine. Based upon the Portfolio Committee’s above disregard for a Parliamentary Resolution to end the captive lion breeding industry, the HLP’s reputation could be in tatters before it is even formed…..

The latest ‘thinking’ on rhino horn trade and rhino trophy hunting was presented via a PowerPoint presentation, “Demand Management” – DEA, 12 March 2019. This presentation and meeting summary reiterated a number of assumptions and assertions that funnily enough, support a pro-trade stance based upon a ‘study’ encompassing market analysis and discussion with key Asian consumers. The Demand Management ‘study’ concludes that:

However, no evidence is provided within the presentation, or discussion of the 12 March 2019 to support the assumption that “regulation [of legal trade] rather than prohibition could be the best solution,” or how “demand was reversible” if/when demand is legitimised and stimulated, apart from the ‘finding’ that “use of [rhino horn products for Traditional Chinese Medicine (TCM) with no proven efficacy] is far more traditionally vested than it actually seems, people are committed and loyal to the belief” – regardless of strongly held beliefs, pandering to and reinforcing such ‘belief’ is hardly likely to deter such ‘belief’ is it, where overturning such ‘belief’ is key to demand reduction isn’t it?

“Legal and illegal trade dimensions – facilitating a legal and well-regulated trade while combating illegal trade it will be possible to supply some of the demand from legal sources and generate funds for conservation of rhino. Managing legal demand and reducing illegal demand“

The potentially flawed assumption being that legal demand can be managed and will not stimulate illegal demand. Where is the peer reviewed, independent economic theory that says the desired equilibrium will be reached (particularly in a market place that is currently dominated by non-conformist criminal syndicates), where the legal demand can preside whilst reducing illegal demand and illicit supply in parallel? Or is the whole approach based on fantasy economics and hope for the best?:

“One of the most striking features in the economic analysis of wildlife trade is the level of misinformation concerning the evolution of market theory over the last six decades. To anyone who comes in contact with the corpus of literature on wildlife trade, and in particular the literature recommending the use of market-based policies, the uncritical use of theoretically discredited analytical instruments is a striking revelation. Perhaps the most important issue here is the conviction that markets behave as self-regulating mechanisms that smoothly lead to equilibrium allocations and therefore to economic efficiency. This belief is not sustained by any theoretical result, a fact that is well known in the discipline since at least the early seventies” –  “Leonardo’s Sailors: A Review of the Economic Analysis of Wildlife Trade,” A. Nadal and F. Aguayo, The Leverhulme Centre for the Study of Value, Manchester, 2014

“The cost of implementing a demand management campaign in the east, is too high, thus dependence on partnerships with NGOs working on the consumer side and need for more funding support”

So it will be up to NGOs to work on the consumer side demand reduction, whilst the DEA works on the legal trade side it would seem. The question is, which NGOs are likely to be effective in such demand reduction whilst simultaneously supporting the DEA’s pro-trade stance that legitimises demand?

“….first focuses on the demand side in consumer states based on the premise that changing consumer behaviour through campaigns and the introduction of legislative restrictions and enforcement can reduce or eliminate demand for rhino horns in consumer countries.”

Is the DEA looking to “eliminate” demand, or only to “reduce” demand for rhino horn to sustain income into South Africa from legal trade? Would South Africa’s rhino breeders be happy if demand for harvested rhino horn was eliminated after a period of legal supply?

If the aim is to eliminate demand, then legitimising and supplying that demand would not seem compatible objectives.

The problem is what happens if Demand Management and Demand Reduction fail, which equates to Legal Demand and an exponential rise in Illegal Demand?  Where is the evidence and practical theory to support the claimed conclusion that “demand” is “reversible” in reality?

“Pro-trade proponents have suggested that if things go wrong and poaching escalates further as a result of lifting the ban, rhino horn trade could either be “closed down or restructured” after three or four years. Such plans are both unhelpful and impractical, firstly because it risks setting off an illegal buying and poaching rush to exploit a potentially limited window of opportunity as soon as trade is permitted. Secondly, experience from rising exports of rhino horn as hunting trophies from so called “pseudo hunts” in South Africa has shown that it can take seven years (2003-2009) to recognise and [try to] address such problems” – “A quantitative assessment of supply and demand in rhino horn and a case against trade,“ Dr Barbara Maas of NABU International, July 2016

Which begs the question, why isn’t that happening anyway? Of course, the excuse will be that the income from selling rhino horn legally is essential….

Price – The hope that reduced market prices will deter incumbent illicit networks is an assumption, not borne out by experience with ivory*, or modelling of non-conformist market forces (which I reiterate are dominated by unpredictable, highly motivated, well funded  criminal networks). What lower prices might risk doing of course, is stimulate demand/poaching, ie. more poaching to increase illicit volumes to maintain illicit income. So if the objective is to reduce/control demand, then lower prices has potentially negative risks too in terms of poaching’s response:

Douglas J. Crooks, James N. Blignaut (Department of Economics, University of Pretoria) in their 2015 paper, “Debunking the myth that a legal trade will solve the rhino horn crisis: A system dynamics model for market demand” concluded:

“….while demand is relatively insensitive to price….we find that a legal trade [in rhino horn] will increase profitability, but not the conservation of rhino populations.”

“According to the pro-trade model, scarcity caused by trade bans, produces high prices which leads to higher poaching rates. Instead of combating illegal poaching, according to this argument, scarcity should be eliminated through legal supply from wildlife farmers and state stockpiles. Legalising markets would then reduce or even eliminate profitability for poachers while maintaining high returns for legal suppliers.

Market – there will be a market, because the DEA wants to perpetuate a (‘legal’) market – which provides opportunities for continued illegal supply to said market!;

Speculation – So how does South Africa’s Rhino Coin fit with the aim to deter speculation on increasing rhino horn values and speculation on rhino extinction, not to mention the stated aim (“South Africa to engage Vietnam on progress…..”) to “Curtail  internet advertising and trading in rhino horn” from Vietnam?:

The idea behind Rhino Coin being to create a speculative index (as per any crypto-currency) for rhino horn based upon the buy/sell orders for the underlying physical commodity – rhino horn held in a vault. Of course, those seeking to profit would like to see the index rise, embracing the old trading adage buy low, sell high…….the suggestion by those promoting Rhino Coin being speculators are “betting that the international rhino horn trade ban will one day fall away, and that horn can then be sold at a stupendous markup in Asia.”

However, another profitable scenario for Rhino Coin speculators that would no doubt make the Rhino Coin index rise would be the underlying commodity becoming scarcer (ie. less wild rhino bearing rhino horn) – under near wild rhino extinction, the higher the Rhino Coin bids to buy farmed rhino horn would be. Of course, the extinction of wild rhino would not only help raise the Rhino Horn index, but would grant those that speculate and ‘harvest’ farmed rhino exclusive supply opportunities. Rhino Coin is hardly a truly altruistic conservation endeavour that aligns with the DEA’s 12 March 2019 stated objectives.

The DEA’s farcical approach lacks any grasp of the negatives in reality – the DEA seemingly holds onto the failed notion of ‘sustainable utilisation’ being a panacea.

“South Africa kicks the can down the road on captive predator breeding,” Ross Harvey, The Conversation, 21 March 2019

*Ivory release from stockpiles did not reduce the commodity value of ivory:

In 1989/1990 CITES introduced a ban on all ivory trade and ‘uplisted’ the elephant to CITES Appendix I. The ban worked initially to reduce poaching/demand, up to 1997.

However, by 1997 CITES sought to ‘find ways’ (delisting relevant elephant populations by country to CITES Appendix II, where only an export license is required) to meet ‘demand’ for (and to profit from) ivory from stockpiles, allowing exports of 47 tonnes of ‘stockpiled’ (highlighted ‘thus’ because there is always the opportunity to launder illicit sources into the mix) ivory to Japan from Botswana, Namibia and Zimbabwe. It would appear that from this ill-judged CITES decision in 1997, “Pandora’s box” was re-opened, with the tacit message to previous ivory trading and poaching syndicates that ‘the game was back on.’

The initial 1997 CITES ill-judged thinking was further compounded in 2000, when South Africa’s elephants were delisted to CITES Appendix II with CITES’ blessing, with 6 tonnes of ‘stockpiled’ ivory permitted for export to Singapore in 2002. In addition, in 2002 some 60 tonnes of ivory from South Africa, Botswana and Namibia was ‘released’ with CITES’ blessing to Japan.

In 2008, again to “quell” demand and “reduce prices,” CITES once more (naively in retrospect) blessed ‘stockpiles’ of ivory to be exported. Since 2008, ivory demand and prices paid have risen exponentially (the price of ivory has skyrocketed from USD $5/kg in 1989 to a wholesale price of USD $2,100/kg in China in 2014), contrary to CITES’ quaint belief that the opposite would be true.