Conservationists who support trophy hunting as a means of raising funds for preserving wild areas and wild animals have always argued that ‘if it pays, it stays’. But new studies seem to indicate that the financial contribution of trophy hunting to conservation in Africa is negligible, and the practice could soon become an anachronism.

The word trophy means a memorial of a victory in war, consisting of spoils taken from the enemy as a token of victory and power.’ – Michele Pickover, EMS Foundation director

Trophy hunting is running out of steam – and money. It’s also running out of boast-worthy trophies and often fails to support conservation. That’s the finding of an Africa-wide report released in March 2019 by the highly respected International Union for the Conservation of Nature (IUCN).

While the decline may be applauded by animal rights activists, this information will be of considerable concern to the hunting industry. It’s a very different picture to the one painted by safari outfitters.

According to the report, poaching, hunting and the bushmeat trade have resulted in a rapid decline in trophy animals in Africa. This, amid growing public criticism of hunting, has led to a sharp drop in the number of hunters worldwide.

The study was done by wildlife specialist Bertrand Chardonnet, who examined biodiversity conservation at genetic, species and ecosystem levels across the African continent. Trophy hunting, he concluded, hasn’t lived up to its claims to support and pay for conservation – essentially shooting itself in the foot.

Huge, formerly-hunted areas in Africa are now emptied of wildlife and are returning to pastoralism. This challenges the claim by hunters that their sport can protect biodiversity and prevent encroachment by farmers.

Chardonnet found that 40% of the big game hunting zones in Zambia and 72% in Tanzania are now classified as “depleted” and useless to hunters, containing no game species.

In hunting areas in Tanzania that still contain lions, despite a six-year minimum age limit, in 2015, 66.7% of the lions shot were five years old or under. There were simply no lions of the correct age left to be shot. 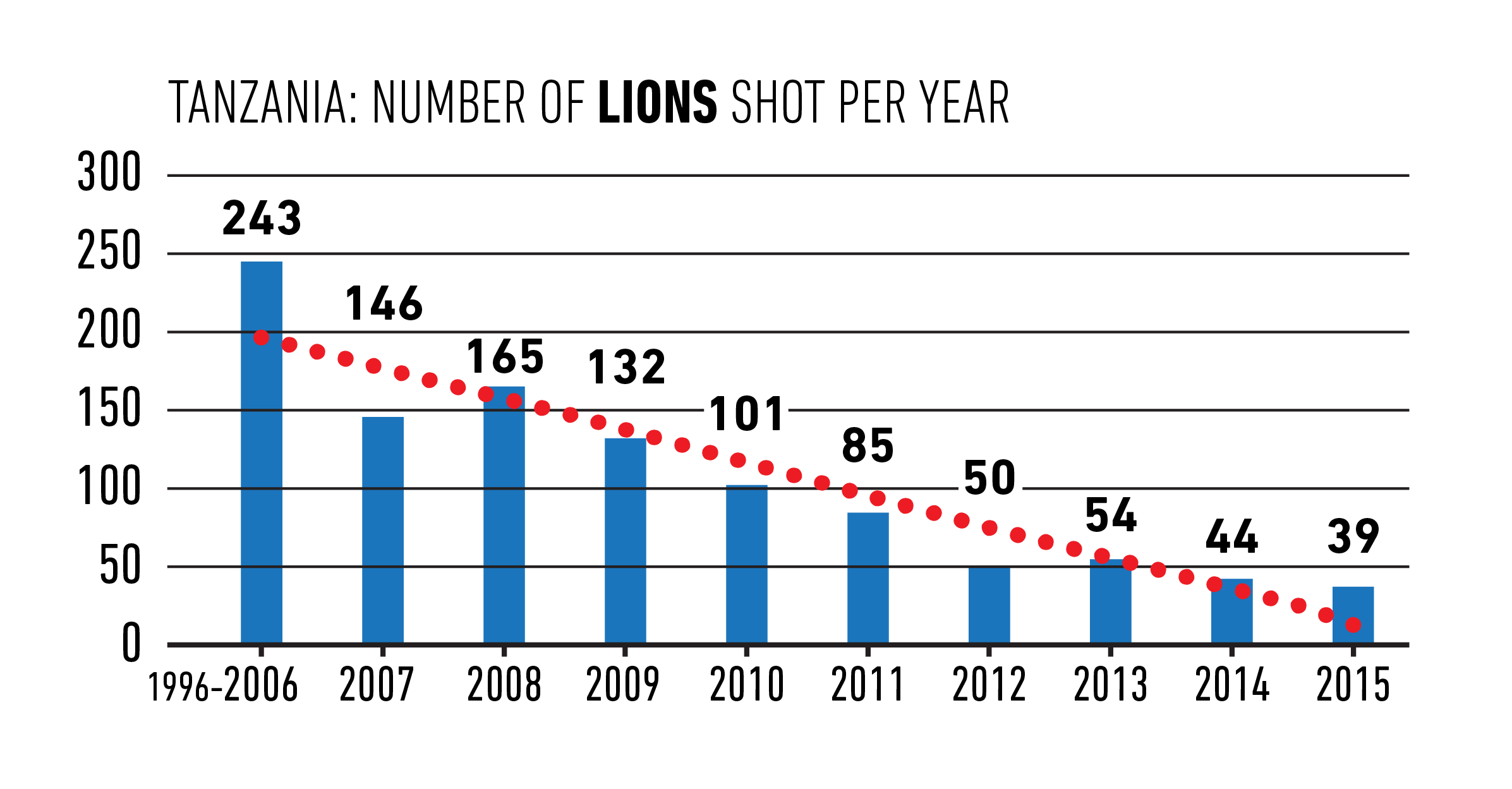 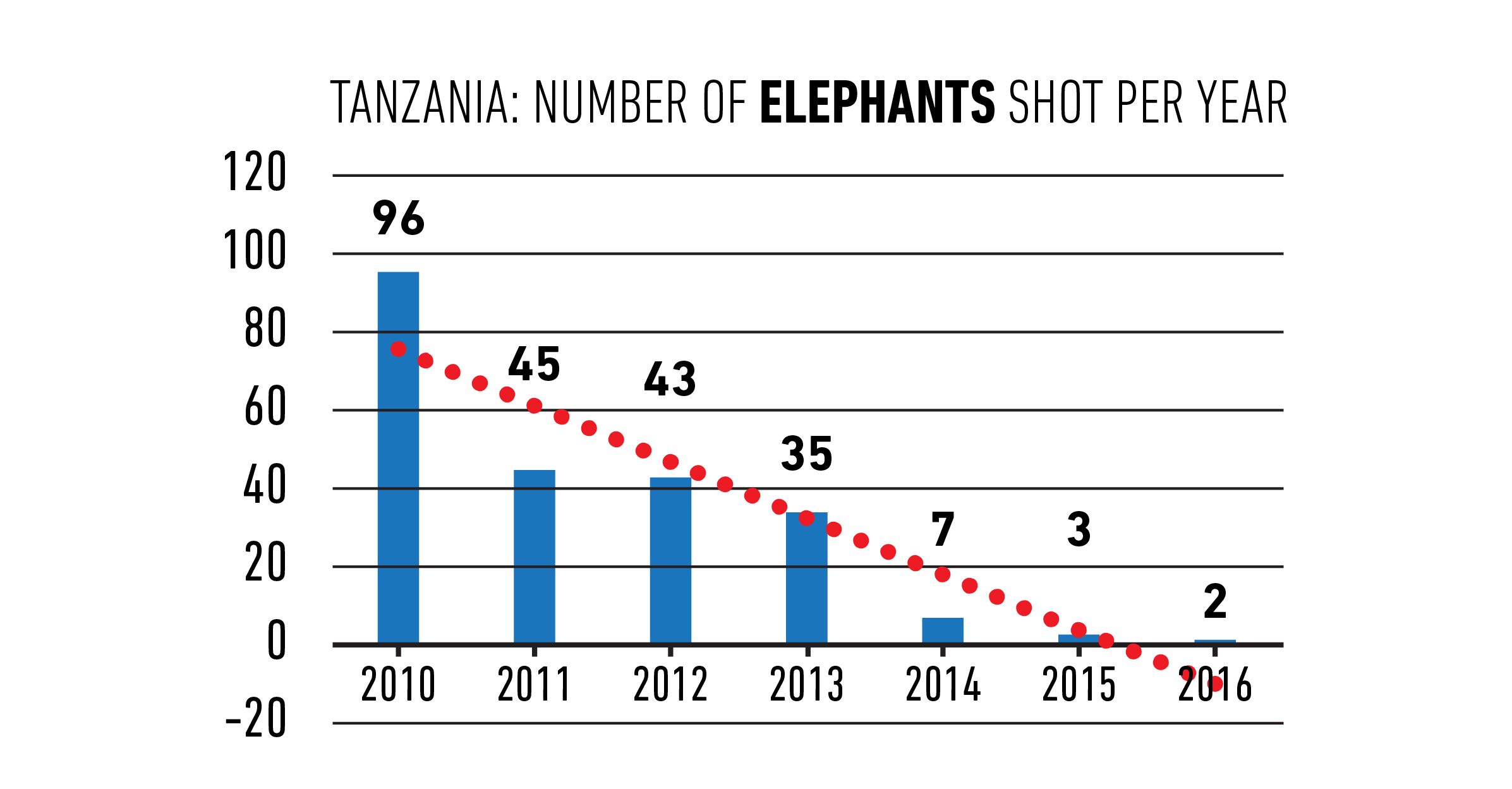 In search of trophies, hunting concessions are relying on animals that wander over from game reserves. This takes place, for example, in the private reserves along the Kruger National Park’s unfenced western boundary. In Zimbabwe an outfitter named JWK Safaris states on its website: “All of the Zimbabwean hunting concessions that JWK Safaris have on offer are open to the adjoined National Parks that serve as feeder parks to the hunting areas.”

In 2018 it organised to kill the largest elephant hunted in the past 30 years and in 2019 has hunted the tusker shown here. 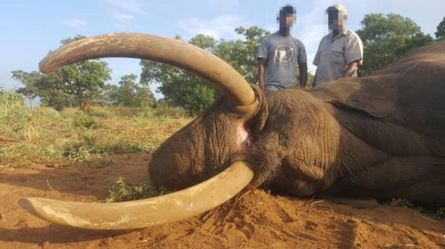 Across Africa, former hunting areas are simply running out of trophy animals to kill. In northern Cameroon, the hunting taxes paid by hunters to the state when they kill an animal halved between 2008 and 2016. In Tanzania, the leading country for big game hunting, the lions shot per year between 2006 and 2015 dropped from 243 to 39.

Since Tanzanian law requires that only elephants with tusks over 1.6m long or weighing over 20kg can be shot, hunting has practically stopped due to the absence of individuals possessing these characteristics. In 2018 the former president of the Tanzania Hunting Operators Association said that the number of lion and elephant safaris had been reduced to a handful.

According to the IUCN study, poaching and agropastoral encroachment have increased because hunting associations failed to invest the necessary amount of money to counter this.

The minimum budget to manage a protected area in Africa is estimated by the IUCN as $7 to $8 per hectare a year. In Tanzania, the study found that in hunting zones, anti-poaching expenditure was $0.18 a hectare a year and was only 2% of the costs necessary to maintain the area’s biological integrity.

Trophy hunting, says the study, has also not contributed significantly to the well-being of Tanzanian communities, with an average community redistribution of $0.08 a hectare.

Using lions as an example, it estimates a good hunting-zone density is two lions within 100km2. To shoot one lion sustainably would require 5,000km2 and the annual upkeep of that area would be about $4-million. The sales price of a safari to hunt lions is on average $50,000 (the price paid by the hunter who killed the lion named Cecil in Zimbabwe).

No one will pay $4-million to shoot a lion. “This shows how hunting is powerless to fund its own conservation,” the study finds. The hunting market, it says, simply does not have the means to pay the real price of safaris. So hunting is running down its prime resource.

The implication is that it’s impossible for hunting to self-fund wildlife conservation, “invalidating the paradigm ‘If it Pays, It Stays’, popular in the period from 1970 to 2010”.

The report has called for a paradigm shift in wildlife management.

“Consumptive use of wildlife is far less promising than we thought and that should be taken into account in the role we assign to protected areas. This leads us directly to reviewing the choice of wildlife management categories.”

How does it fare against photographic tourism? In Kenya, tourism, which is mainly generated by the country’s wildlife, recorded a turnover of $2.8-billion in 2017 for 429,500 direct jobs. In Tanzania, the figures were $1.975-billion and 446,000 direct jobs.

A 2017 [2013] review from Economists at Large found that in Ethiopia, Mozambique, Namibia, South Africa, Tanzania, Zambia and Zimbabwe, trophy hunting brings in less than $132-million (or just 0.78%) in consumptive tourism spending to the seven study countries, out of $17-billion annual tourism spending, and 0.03% of the GDP of those countries. The relatively small amount generated by trophy hunting, says the review, is further diluted by corruption, profit-taking by a small number of people in the industry and government fees.

A further problem is that hunting fees are mainly paid in the country of the hunter and don’t touch ground in Africa. Back in 2010, Animal Rights Africa found there to be “little evidence that the revenues generated are reinvested in the preservation of wilderness and protecting wild animals. It’s also unclear who benefits. It appears that most of the profit goes to individuals within the industry.”

In 2018 Peter Flack, a leading author on hunting and supporter of farm-bred wildlife, wrote in his blog that after a 50% decrease in the number of foreign hunters in just a few years, many game farmers were killing their wild animals and replacing them with cattle, given the poor economic situation of the game farming sector.

So-called canned lion hunting is an attempt to keep lion hunting viable, but has been widely criticised in international campaigns and subject of a shocking report by former Tory peer Lord Ashcroft following a year-long investigation and highlighted in the British Mail on Sunday newspaper on 28 April 2019.

Attempts to genetically alter animals to produce colour variants or larger trophies to attract hunters have also been met with international condemnation. The prices of these animals have now dropped to their lowest level yet.

This leaves numerous game farms without real sources of income and has led to lion abattoirs and an increase in the sale of lion skeletons for fake tiger wine.

Overall, the latest IUCN report indicates a rapid decline in big game hunting in Africa over several years. Trophy hunting, it says, “does not protect the natural habitat from agropastoral encroachment. It can only finance a small percentage of the sum required for its conservation and its socio-economic benefits are too low.

“Hunting used to be a conservation tool, but in the great majority of cases it no longer plays this role and will not do so in the future either.”

Trophy hunting is party to – and a victim of – a wider ecological crisis. A study published by the US Academy of Sciences in 2018 found that more than 300 mammal species have been wiped out since humans overran the world after the last ice age.

Research by the IUCN found that at least 1,141 of the 5,487 mammal species on Earth are known to be threatened with extinction. At least 76 mammals have become extinct since 1500.

In 2018, the WWF’s Living Planet Report warned that animal populations had declined by 60% since 1970.

“By killing breeding-aged animals and disrupting their social structures,” the report said, “trophy hunting is ‘super-additive’ because it causes wildlife populations to decrease at a faster rate than would naturally occur.” 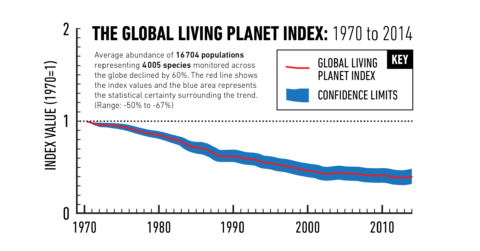 It was compiled by more than 500 experts in 50 countries, and will document high rates of extinction, unsustainable levels of resource usage and how this compromises humanity’s ability to provide the resources required for a growing human population.

The news for wild animals is not good. We have clearly damaged the earth’s biodiversity almost beyond repair. In the face of looming ecosystem collapse, the IUCN report indicates that trophy hunting is an anachronism. DM

Don Pinnock is a freelance environmental writer who works with the Conservation Action Trust.

2 thoughts on “Trophy Hunting, Part Two: End of the game”