Hanako, which means “flower child,” was a female Asian elephant gifted in 1949 to Japan by Thailand, as a symbol of friendship and peace.

Hanako appears to have been much revered and loved in Japan, however Hanako spent the rest of her 69 year life in captivity, housed in concrete zoo cells, until her death on 26 May 2016 at Inokashira Park Zoo in Tokyo.

Prior to Hanako’s last months, efforts were made (reference blog campaign by Ulara Nakagawa) to seek suitable sanctuary for Hanako, or at the very least, improvements to her barren enclosure.

But ultimately, those efforts came too late for this grand old Asian lady (Hanako surpassed the usual 40 year life expectancy by some margin). Hanako started to pass away on the night of 25 May – she was alone as she had been for most of her life, deprived of the company of her own species and denied her freedom to her very last breath, which came on the afternoon of 26 May 2016.

As a tribute to all animals so enslaved in zoo captivity and the ‘need’ for them to attract visitors and zoo income, it has been proposed by some that funds originally raised to help with Hanako’s potential sanctuary are:

There is a tentative campaign (petition) and proposal to erect such a statue to Hanako in Central Park, New York, perhaps financed in part from Hanako’s own sanctuary funds.

At first I wondered why a statue on USA soil to Hanako, an Asian elephant held in a Tokyo zoo? How could that possibly help any zoo animal’s plight? Then, I recalled, that around March 2016, 18 elephants were taken from the wild in Swaziland and shipped to the United States (U.S.) to ‘serve their time’ in zoos – Dallas Zoo, the Sedwick County Zoo in Kansas and Omaha, Nebraska’s Henry Doorly Zoo.

These U.S. zoos obtained permits to import the Swaziland elephants from the U.S. Fish and Wildlife Service (USFWS) in January 2016, with the proposed transportation originally scheduled for May 2016.

A lawsuit was filed in good time by Friends of Animals (FoA) in the U.S., aiming to demonstrate that the USFWS had a mandatory duty to:

“fully evaluate and disclose whether the elephants, as a result of captivity, would suffer social, psychological, behavioural, and physical impacts for the rest of their lives.”

A preliminary injunction hearing was scheduled for 17 March 2016. However, on Tuesday 8 March 2016, an anonymous source contacted a representative for Friends of Animals to alert them that a plane had landed in Swaziland and the subject 18 elephants would be loaded within 24 hours.

Friends of Animals filed for an emergency injunction to argue for the ‘sudden’ transfer to be postponed. A teleconference was held with US federal court judge John Bates. Judge Bates’s ruling noted that the short timeframe meant he was “not able to definitively resolve the issue,” however he eventually sided with the zoos on the grounds that the subject elephants had already been drugged and that “leaving them in the small African nation would have put them at risk” (though it’s unclear what those ‘risks’ in their home nation might have been considered to be).

So, these 18 elephants left their natural habitat and life in Swaziland just as the rains broke through the regional drought (the ‘drought’ also being used as a pre-cursor/excuse for the “unruly” (sic) elephants’ required move), to end up captives in zoos, just like Hanako.

“Swaziland officials have claimed that elephants are overrunning their country, and if they are not sent to the zoos, they will be forced to kill them outright. However since the elephants were flown to U.S. zoos, there are only 21 elephants [now] left in Swaziland” – Friends of Animals

So perhaps the gesture of building a statue to Hanako will help to cement the public uprising against animal abuse, with zoos no longer seen as ‘entertainment’ or vital for ‘education,’ but perhaps zoos seen more as the prisons for captives, with humans paying to gawp at the bored and frustrated prison cell occupants. Sometimes, the captive’s frustration becomes tragically obvious:

“Phyllis Lee, Scientific Director of the Amboseli Trust for Elephants, says that targeted throwing of stones and branches by elephants is very unusual” –

“It can happen when elephants are frustrated or bored. In my opinion, it’s unlikely the elephant was directly targeting the girl – but exhibiting frustration. You can’t predict what animals in captivity will do.“

Chris Draper, Born Free Foundation’s manager for captive animals and science said: “This is a deeply upsetting and tragic accident and our thoughts are with the girl’s family at what must be a very difficult time. Time and again, we are seeing disturbing evidence that zoos simply cannot guarantee the safety of their visitors or their animals. Elephants commonly manipulate objects in their environment, and in relatively impoverished captive situations they may develop behaviour that includes regularly throwing items in order to interact with, or provoke a reaction from, visitors or keepers. To prevent such behaviour from developing, elephants need to be given the opportunity to focus on natural foraging and social behaviour, away from the public gaze” – Born Free Foundation, 28 July 2016

The Friends of Animals still intends to pursue a lawsuit against the USFWS to deter further U.S. (and hopefully wider) transgressions to take wild animals into zoos and seek to derive income/profit from their plight :

The “USFWS is turning a blind eye to the growing scientific consensus that elephants are highly intelligent, social and emotional beings,” said Mike Harris, director of Friends of Animals’ Wildlife Law Program. “The trauma of being ripped from their families in the wild, transported halfway around the world and forced to live the remainder of their lives in captivity will have an everlasting effect on these animals. Evidence shows that they will suffer from depression, anxiousness, mood swings and fear. They also face a high risk of disease and disability. No wonder it has been shown that zoo elephants simply don’t live as long as those in the wild” – Friends of Animals, 14 March 2016

Perhaps even the U.S./USFWS will be shamed into recognising the unethical practices they recently helped perpetrate in taking 18 wild elephants from Swaziland into a life of imprisonment on foreign soil (concrete).

If a statue to Hanako on US soil can help drive home the shame for the world to see, then Hanako might indeed be ‘honoured’ in some lasting legacy. 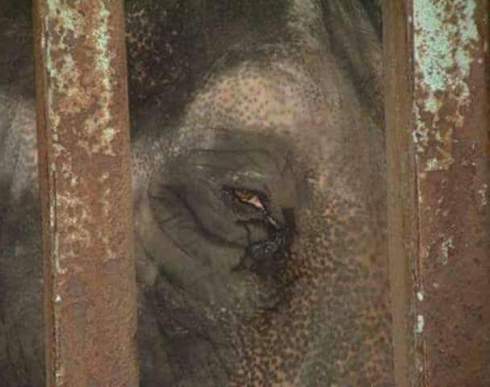 “Hanako, the Japanese Elephant, Dies After Inspiring Petition on Living Conditions,” The Elephant Sanctuary in Tennessee, 26 may 2016

“US zoos secretly fly 18 elephants out of Swaziland ahead of court challenge,” The Guardian, 9 March 2016

4 thoughts on “Dying in Captivity – Hanako, an Elephant’s Legacy”