An insatiable demand side knows no bounds.

This is especially true when it originates from an increasingly wealthy Chinese/Vietnamese population of 1.8bn and China’s economic might seems to crush any dissenting voices questioning that demand.

Even when China does bow to international pressure, such as seeking to shut down its domestic ivory industry, the satisfaction of demand is off-shored to Laos for example. 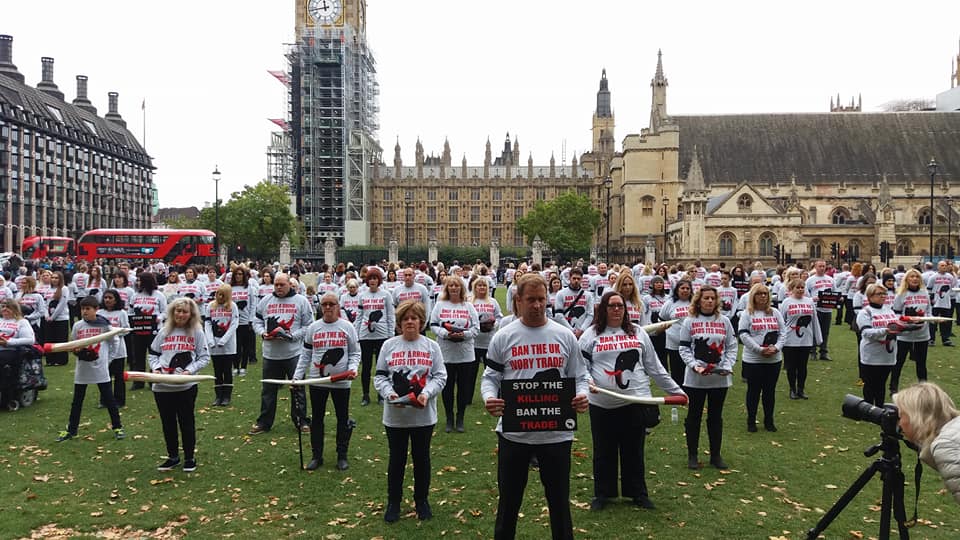 The Global March for Elephant and Rhino (GMFER), London was held 7 October 2017 in an optimistic atmosphere, after the United Kingdom, Environment Secretary, Michael Gove announced a consultation period (ending December 2017) to consider additional regulation on ivory trading in the United Kingdom – hopefully, a long overdue all-encompassing ban will finally be announced with few, if any exemptions.

Of course some will argue for exemptions, but no one should be under any illusion – ivory worship of any antique origin does encourage the desire for illicit modern pieces (and the poached elephants slaughtered to source the ivory materials).

But much more needs to be done to exterminate global trade and its detrimental spread.

When access to required production ‘materials’ (in this case, animal parts) is unable to meet the  industrial scale demand, then alternative global sources of supply are sought and/or substitute materials from an alternative species ‘procured.’

Two such examples have surfaced since the initial trade and demand were promoted; the mass killing of donkeys for their skins and hippos for their teeth (as an alternative supply to elephant ivory).

The lack of oversight for even minimal animal welfare in ‘legal’ supply routes prevails as the rush to profit overrides all it would seem – the blood and suffering of exploited animals to supply seemingly trivial vanity products and ornaments makes the sickening exploitation even more chilling.

There is an expansion of both ‘legal’ and illicit means to obtain donkey skins to meet a seemingly insatiable demand to supply the Traditional Chinese Medicine (TCM) called “ejiao” – otherwise known as Colla corii asini or donkey hide glue. These products are based upon extracts of donkey gelatin taken from the donkey’s hide. The gelatin is mixed with herbs and other ingredients and formed into gelatinous bars, pills or tonics. 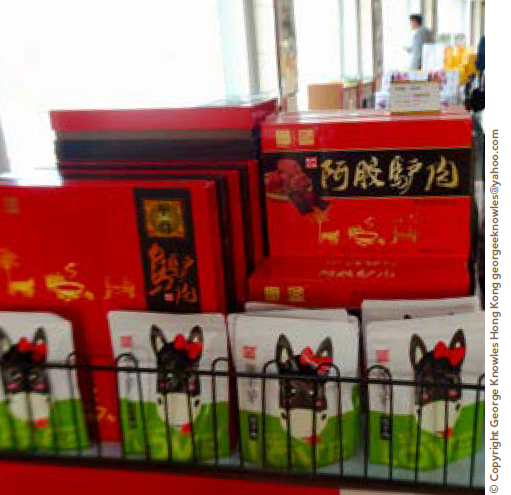 Ejiao is a TCM that stems from over 2,500 years ago when emperors were convinced of its claimed human health benefits – which include anti-ageing properties, an increase in libido and a reduction in reproductive-organ disease in women.

Ejiao was rebranded as a consumer item within China in the 1990s, as face-creams, liqueurs and sweets. Since 1991, China’s own donkey population has shrunk by 46% (from 11 million to 6 million) to meet demand, which has promoted donkey farming within China, but also increased sourcing of donkey skins from overseas. 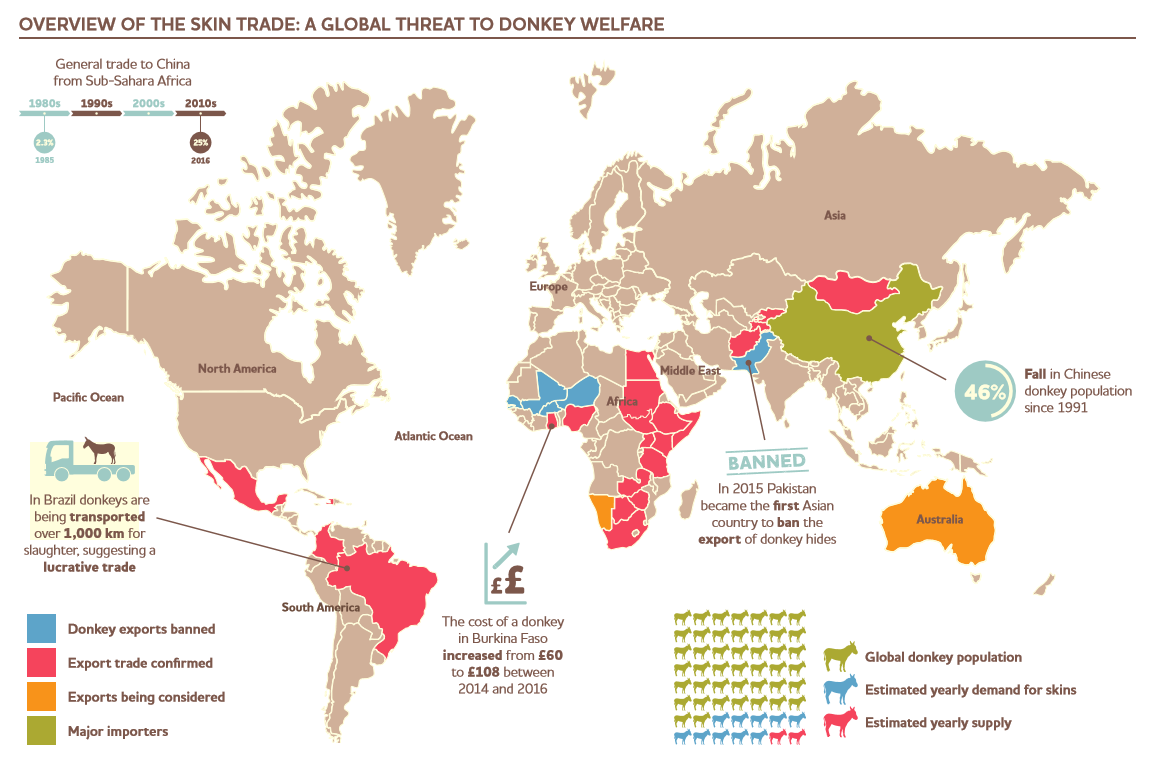 Source: “Under the Skin,” The Donkey Sanctuary, January 2017

“1.8m skins are traded every year – according to estimates from UK-based charity The Donkey Sanctuary – but the demand is as high as 10m”– “Why are donkeys facing their ‘biggest ever crisis’?“, BBC News, 7 October 2017

So, the once humble donkey, traditionally used as a beast of burden in many rural settings has been ‘elevated’ and is now targeted, thanks to the promotion of its claimed TCM benefits prized at around $400 per skin.

The implications are widespread and overwhelmingly negative (apart from the benefits for those that profit from the trade of course).

The Loss of Villagers’ Donkeys and Wildlife Trafficking

This stimulated demand and disparity in supply has led to donkeys being poached from villagers, with donkeys being led away in the night, slaughtered and skinned by poachers:

“All 24 donkeys in a Tanzanian village were stolen, killed and stripped of their skin overnight, leaving the community devastated” – “Charity releases new film to raise awareness of donkey skin trade,” The Donkey Sanctuary, 3 October 2017 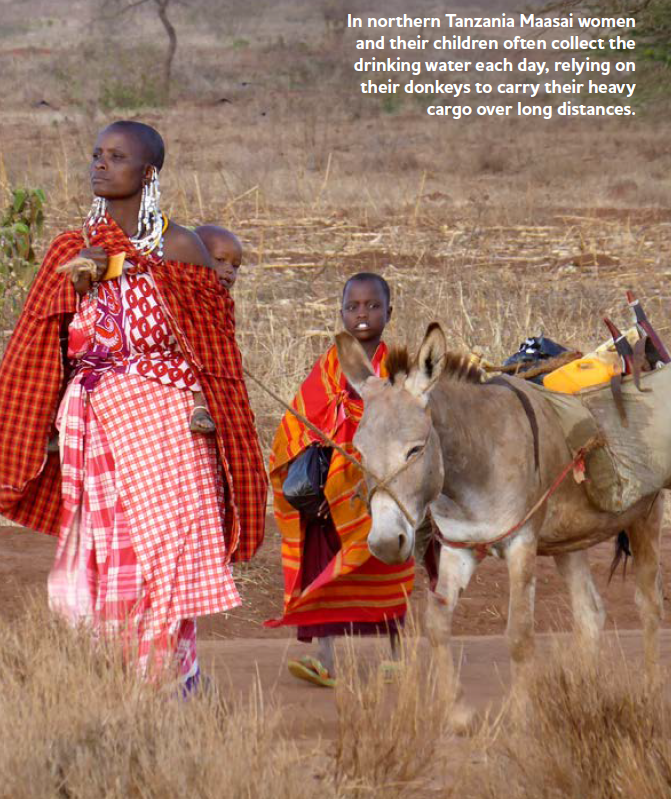 Source: “Under the Skin,” The Donkey Sanctuary, January 2017

The syndicates that profit from illicit rhino horn and ivory smuggling etc. also diversify to encompass profiteering from seemingly any exploitable and vulnerable animal/wildlife:

“While destined for different markets, shipments of donkey skins present similar logistical challenges to other contraband, placing their handling and transport to Asia within the arc of wildlife traffickers and other groups accustomed to evading the law” – “Rush for Donkey Skins in China Draws Wildlife Traffickers,” National Geographic, 22 September 2017

The IUCN class the hippo as vulnerable, with an estimated global population of around 110,000 – 130,000, but threats such as illegal hunting (for meat) and illicit supply of hippo canine teeth as a source for ivory are among the threats the species faces:

“A 1994 assessment by TRAFFIC, the monitoring agency of international trade for the IUCN, reported that illegal trade in Hippo ivory increased sharply following the international elephant ivory ban in 1989” – IUCN

So, when a ‘legal’ trade is started (ie. as elephant ivory was traded legally before 1989), even when the lack of sustainability eventually initiates international consensus for a global ban on such trade, the demand/trade does not shut-off, but partially shifts its focus seeking to exploit alternative sources.

In a recent August 2017 study (“Missing teeth: Discordances in the trade of hippo ivory between Africa and Hong Kong), the researchers found that upon interrogation of Convention on International Trade in Endangered Species of Wild Fauna and Flora (CITES) trade database, that almost all the trade in hippo teeth ivory was via Hong Kong. However, the volume of imports declared by Hong Kong was substantially different than the quantity reported by the exporting countries (Uganda and Tanzania), with the source of some 14,000kg of hippo teeth unaccounted for and thereby deemed to stem from illicit activity (Note: 14,000 kg is equivalent to 2,700 hippos, or 2% of the world’s hippo population). Presumably, this excess of imports was sourced from illegal hippo hunting. 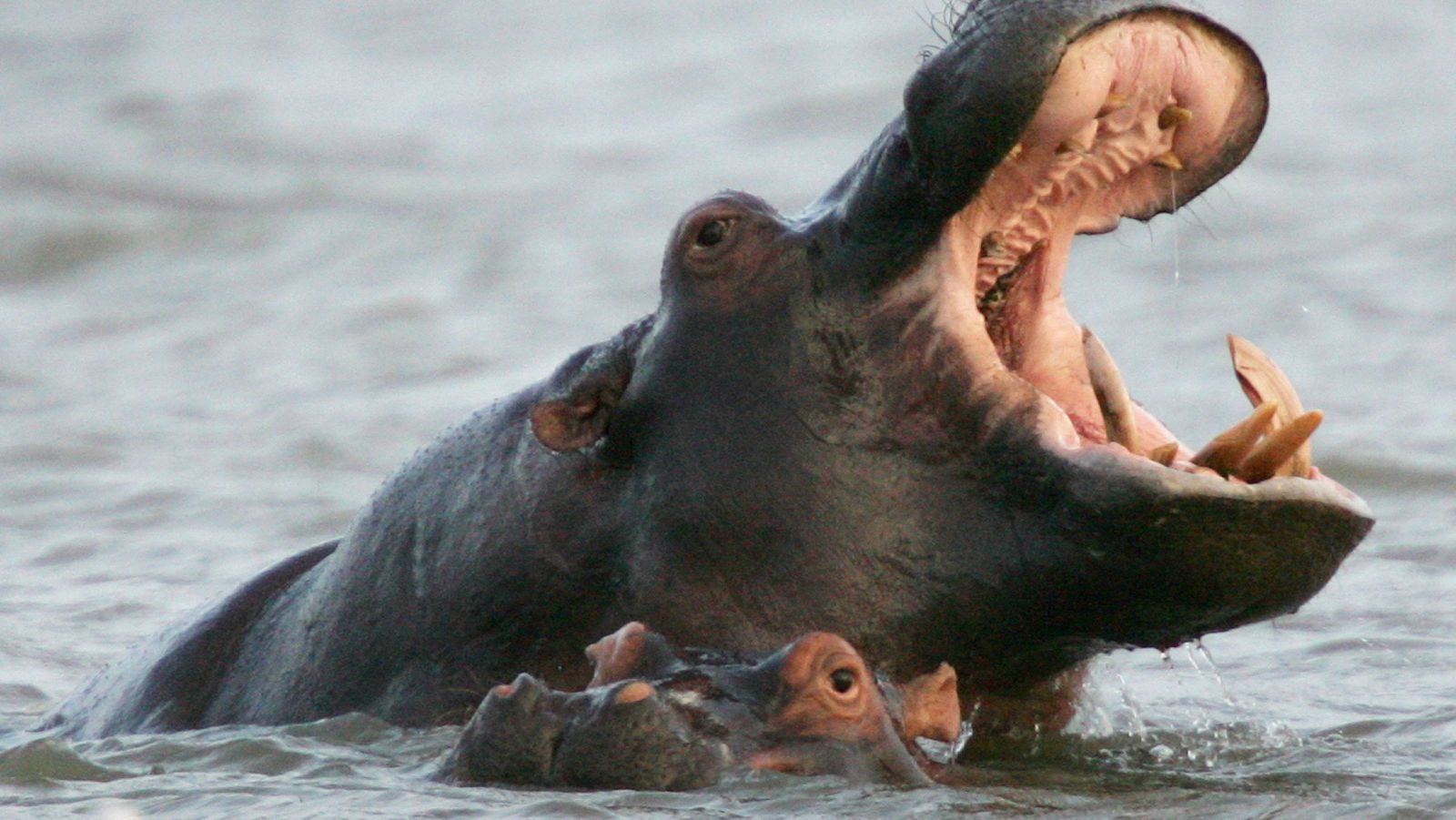 There is no sign of this demand abating or becoming manageable, which will arguably push hippos towards extinction if demand is not eliminated.

Is more ‘legal’ trade the answer, when illicit and inhumane activities dominate?

At present it’s ‘legal’ to export up to 7,300 donkey skins a year from South Africa:

“Meat safety regulations require donkeys to be slaughtered in approved equine abattoirs and only one such slaughterhouse is now operating, with a license to process 20 donkeys a day. (Authorities recently shut down two other slaughterhouses for failing to comply with regulations.)

And yet a single export firm, Anatic Trading, investigated by police in Johannesburg this year, traded more than 15,000 donkey skins in an eight-month period from July 2016 to May 2017, exceeding the entire country’s annual legal limit at the time by some 5,000 skins” – “Rush for Donkey Skins in China Draws Wildlife Traffickers,” National Geographic, 22 September 2017

Furthermore, animal welfare is not guaranteed within any such ‘legal’ accommodation:

“The National Council of Society for the Prevention of Cruelty to Animals states that “donkeys are being rounded up/stolen, then transported and brutally slaughtered for their skins. A recent case focused on 70 sick, emaciated animals left to starve in Bloemfontein, where the owner stated that “he was only interested in the skins” to export to China…..Corralled on a smallholding outside Bloemfontein, a city in South Africa’s arid interior, 70 donkeys nosed through trash piles for food or flopped in the dirt, too debilitated to stand. According to a farmhand guarding the property, they’d gone a week without sustenance” the boss, the man said, cared only about their skins and hadn’t even given them water. Ten of the animals had already died” – “Rush for Donkey Skins in China Draws Wildlife Traffickers,” National Geographic, 22 September 2017

With increasing wealth generation and demand from China for ejiao, ivory, rhino horn, tiger bone wine (utilising tiger, lion, leopard…)…..then the bonanza for those in the scramble to profit is only set to intensify.

For example, “Will donkeys be skinned alive in new Zimbabwe abattoir?” (Alberton Record, 5 October 2017) the detrimental treatment of the once humble donkey is likely to increase on a global basis – even Australia (“Under the Skin,” page 21) is apparently considering the exploitation of its feral donkeys to cash-in.

China’s economic power makes the likelihood of restraint with regard to ejiao production unlikely to stabilise, let alone decline.

What can be gleaned from the demand for hippo teeth as a source of ivory? Clearly when demand is first seized upon as a ‘legal model’ to be pursued as a sustainable business, then shutting off the trade once established is nigh on impossible. When elephant ivory trading was first banned in 1989, after its negative impacts were realised, initial compliance was proving successful. But only for alternative supply routes and species (hippo) to be exploited, whilst a background level of elephant poaching persisted (but has since escalated thanks to CITES permitting the release of ivory stockpiles since the 1989 ban, reigniting demand and illicit supply).

The rhino horn trading ban was working up until demand was promoted/stimulated when in 2006 rhino horn potions were promoted as a ‘cure’ for cancer (Ref . “‘Cure for Cancer’ Rumour Killed off Vietnam’s Rhinos,” The Guardian, 25 November 2011) – the escalation in rhino poaching has been pronounced ever since. 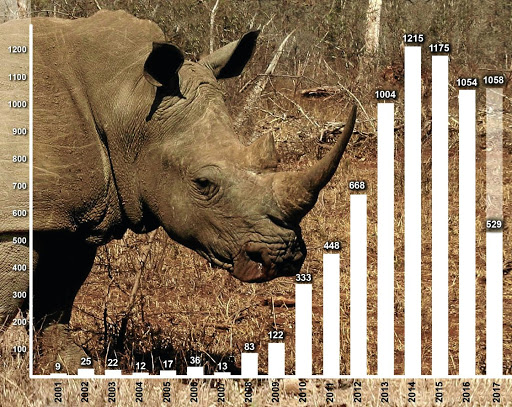 How can such demands and efforts to supply by ‘legal’ means be seen as anything other than self generated marketing opportunities, based upon exploitation/greed within a lax and under-resourced regulatory and enforcement framework, undermined by absent political will that over-looks the profiteering from such animal ‘utilisation.’

Time for a fundamental rethink on the ‘utilisation’ of animals/wildlife is long overdue – unmanageable exploitation and insatiable demand are the enemies.

“Namibia says anthrax could be to blame for deaths of more than 100 hippos,” The Guardian, 9 October 2017