So, not unexpectedly, the United States has taken alarming and regressive steps that will further imperil the survival prospects of wild elephants and lions.

The protection for lions announced by the USFWS at the start of 2016 are now being regressed, with lion hunting trophy importation being permitted from Zimbabwe and Zambia (with Mozambique, Namibia and Tanzania “under review”), but there is no obvious scientific backing provided (yet) for the lifting of any lion trophy restrictions from Zimbabwe, or Zambia – why?

‘Wild Lions’ and ‘Managed Wild Lions’ trophies are permitted for import by the USFWS from South Africa, but the exception (for now) being the restriction maintained to prevent the importation of lion trophies derived from ‘Captive (‘Canned’) Lions,’ due to the obvious lack of any credible conservation credentials displayed by the industry. 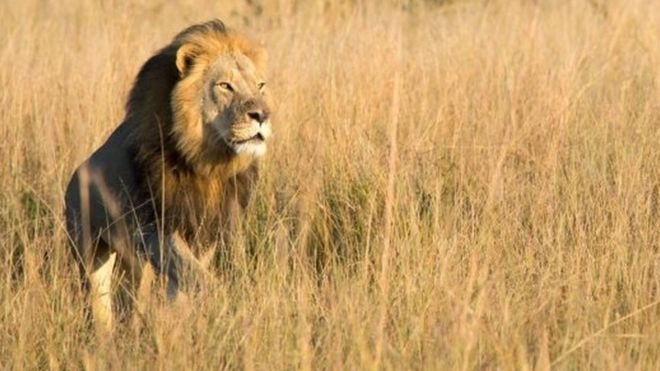 What does the USFWS’s regressive approach tell us? The science does not matter – when a wild lion (such as Cecil, or indeed Xanda) can be lured from the protection of Hwange National Park (Zimbabwe) and killed within a conveniently adjacent ‘hunting concession,’ apparently that is acceptable conservation of a vulnerable/endangered species. If such hunting was truly conservation, then why aren’t the hunting concessions themselves full of lions to be slaughtered for trophies? Why the need to lure a pride male lion (with dependent cubs) from the protection of a national park in order to take the coveted trophy and try to excuse it as conservation somehow?

The world (CITES and IUCN) seeks to tackle the issue of ivory worship and seeks to shut down domestic ivory trading in the hope of stemming the elephant poaching attrition (20,000 – 30,000 African elephants a year), the USFWS tries to justify the hypocrisy of promoting the killing of elephants for trophies (tusks):

“The U.S. Fish & Wildlife Service (Service) will begin issuing permits to allow the import of sport-hunted trophies from elephants hunted in Zimbabwe, on or after January 21, 2016, and on or before December 31, 2018, for import permit applications that meet all other applicable requirements“ – USFWS, 16 November 2017

UPDATE: 18 November 2017 – It is yet to be acknowledged on the USFWS’s website, but the Washington Post reported 17 November 2017 – “Trump halts Interior’s elephant trophy decision“ (for elephants in Zimbabwe and Zambia, but no mention of halting lion trophies…). The ‘decision’ is “on-hold” until the conservation value has been “reviewed” – an approach acknowledged by Interior Secretary Ryan Zinke:

“President Trump and I have talked and both believe that conservation and healthy herds are critical. As a result, in a manner compliant with all applicable laws, rules, and regulations, the issuing of permits is put on hold as the decision is being reviewed.“

The USFWS’s justification to permit elephant hunting trophy importation is that:

“Human-elephant conflict, already on the rise, is a symptom of this rapid land transformation and only likely to continue to increase. This is likely to result in increased damage to both people and elephants. Habitat loss and fragmentation will result in increasingly fragmented elephant populations, which are already at high risk of loss of viability – CITES, 24 October 2017

– Tanzania is “under review” by the USFWS

– The Kruger National Park, Elephant Management Plan does not have an emphasis on ‘hunting theory’ but instead will “let natural processes determine elephant populations and movement” – it should be noted, that “Kruger’s elephants are now part of a regional population, with fences having been removed in places (west into private South African game reserves and north/east into Zimbabwe and Mozambique).” 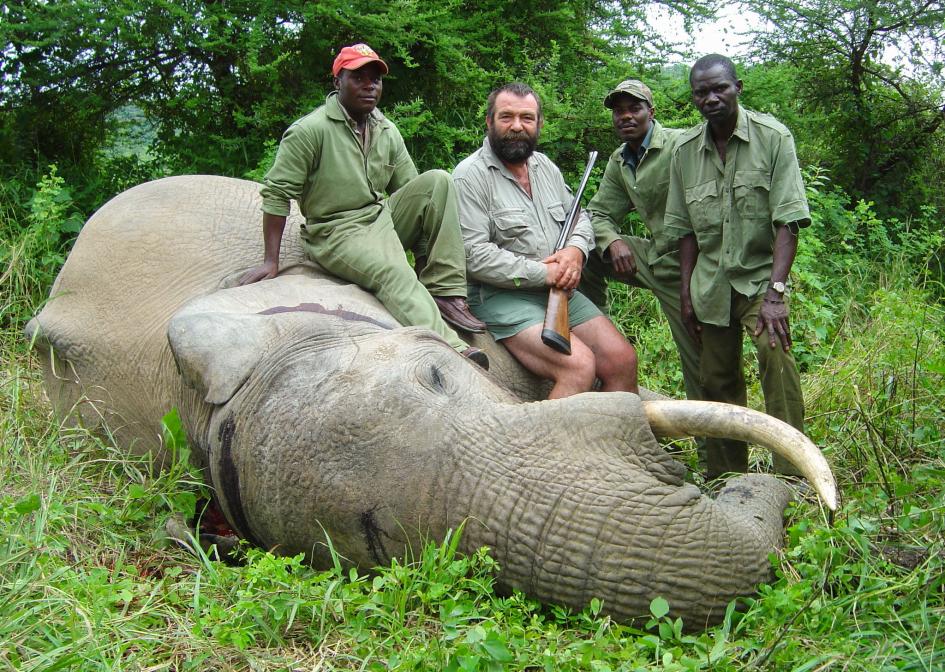 So, apparently Zimbabwe has established the elephant population present in country and can ‘accurately’ set a scientific quota – all of which suggests such obvious, basic ‘science’ was absent in the past from hunting quotas, so how can previous elephant killing for trophies be considered as ‘conservation?’

Regardless, the well-worn mantra of “well-regulated hunting” positively helping conservation is trotted out (again) by the USFWS, because ‘this time it ‘might‘ actually be well-regulated’ is the apparent USFWS assumption. Of course, this depends on the proliferation (or otherwise) of migratory elephant herds into and out of Zimbabwe and how ‘scientific’ any hunting quotas turn out to be in reality.

Even the USFWS’s justification admits Zimbabwe’s ‘scientific approach’ might be an aberration:

“With the establishment of the EMP, there appears to be a more systematic, scientific approach to establish national quotas”

The African Wildlife Foundation conducted an intensive analysis of the CITES trade database and reported in October 2017 that between 2001 and 2015, an estimated 81,572 African elephants were killed for hunting trophies (on average, that’s around 5,800 elephants per year). 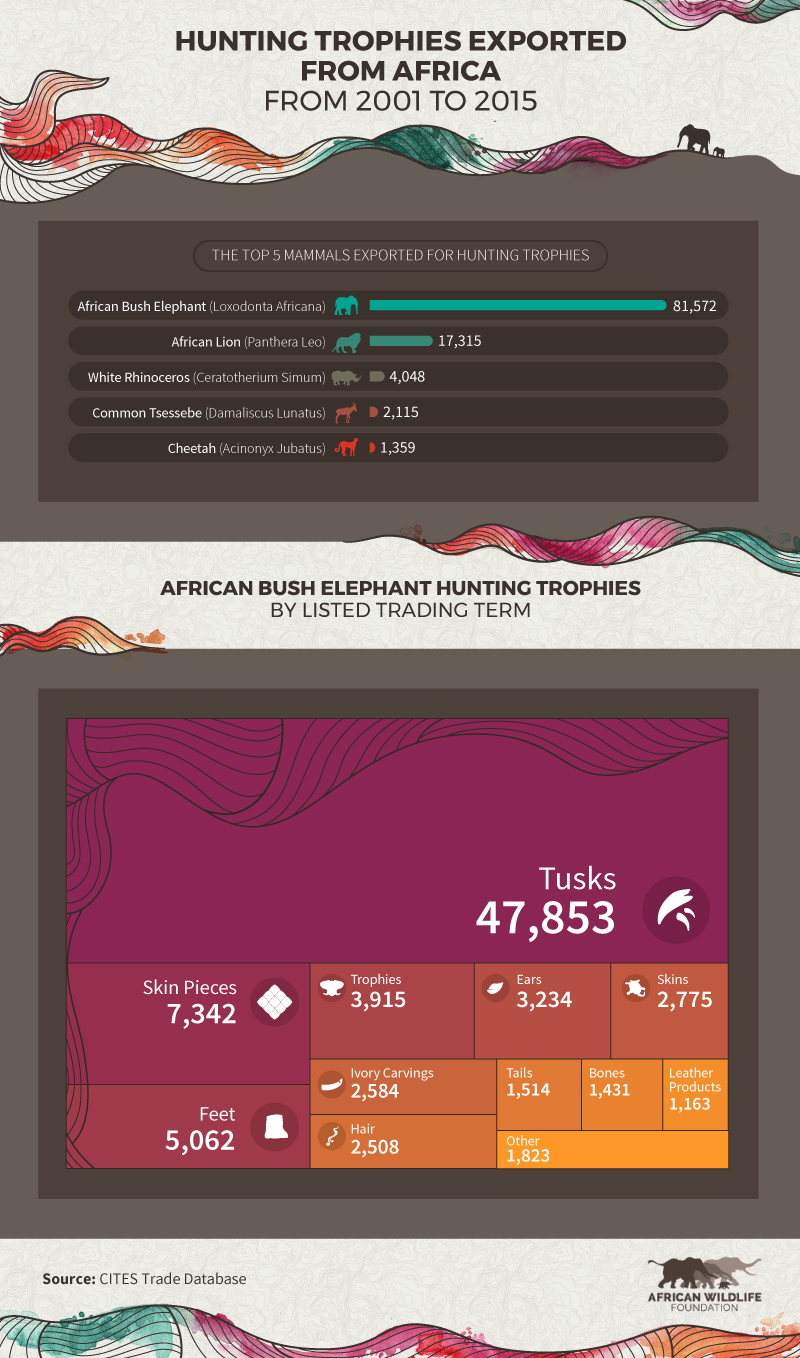 Where is the undeniable science that says the killing of an estimated 81,572 elephants helped in any way to conserve the elephant species (References 17, 18, 19 & 20)? Furthermore, how does the proposed  killing of even more elephants in the coming years for senseless hunting trophies have any conservation benefits for the wild species? Elephants face many threats from poaching, habitat loss, human/wildlife conflict. Today, the wild African elephant population is perhaps less than 400,000 across the entire continent. This population is insufficient to reproduce and sustain that population with the current attrition rates, let alone sustain more “harvested” elephants for meaningless trophies.

“Let’s be clear: elephants are on the list of threatened species; the global community has rallied to stem the ivory trade; and now, the U.S. government is giving American trophy hunters the green light to kill them” – Wayne Pacelle, Humane Society International, 15 November 2017

“Elephants are dying in their tens of thousands each year at the hands of ivory poachers, and are in serious decline across much of the African continent. Many populations can’t withstand the additional threat posed by trophy hunting. The lifting of the ban will put the elephant populations of Zimbabwe and Zambia under even more pressure, cause immeasurable suffering and devastate targeted individuals and their family groups. It’s nothing short of a disgrace” – “Born Free condemns self-serving US move to lift ban on elephant trophy imports,” Mark Jones, Born Free Foundation, 17 November 2017

The worry is, the current United States administration is going to take further, biased decisions in the future (not based on science, but a belief in the hunting lobby’s mantra) :

The United States Department of the Interior (DOI) (under direction from Secretary Ryan Zinke) along with the United States Fish and Wildlife Service (USFWS) is establishing the “International Wildlife Conservation Council.” However, this grand title does little to disguise this “council” as anything other than a pro-hunting body populated by ammunition and armoury manufacturers, hunting associations, archery and/or hunting sports industry, hunting outfitter and/or guide industries related to international hunting. This council perpetuates the mantra/myth of “well-regulated hunting” providing only positive conservation benefits etc. There is a passing concession to include the counsel of the “wildlife and habitat conservation/management organizations,” but the “international” moniker appears to be misleading – the countries setting hunting quotas (using scientific analysis, or not?) are not openly mentioned as “council” members.