In November 2015, the Professional Hunters’ Association of South Africa (PHASA) announced it was withdrawing support for the ‘canned’ lion/big cat hunting and breeding industry.

Apart from ‘canned’ offering no element of ‘fair chase’ (which some elements of the professional hunting fraternity consider in their vision of the world, to be an ‘ethical imperative’), the ‘canned’/’captive’ lion industry has no conservation credentials, with calls for the whole industry to be urgently reviewed.

Therefore, it was a surprise on 22 November 2017 to many, to learn that following the 40th PHASA Convention and AGM, the PHASA had voted by a majority to renew its support of ‘canned’ hunting (encompassing a constitutional amendment to adopt the definition that “Ethical hunting shall mean all hunting permissible by law” (sic) – be that moral, or ethical in any real world environment). 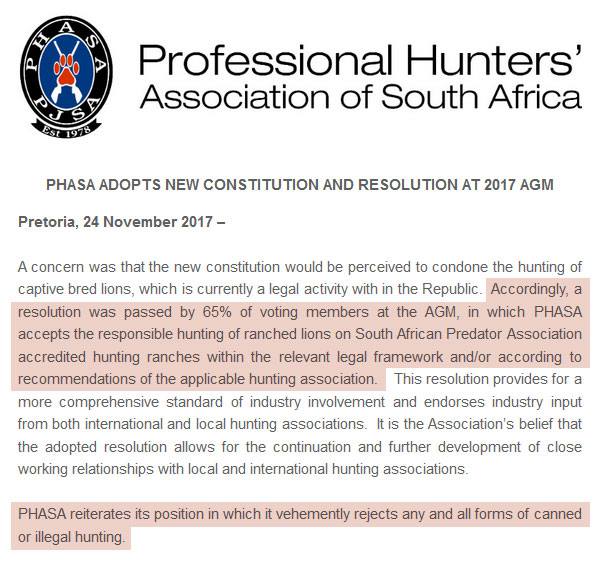 Update: 27 November 2017 – PHASA Press Release, “PHASA ADOPTS NEW CONSTITUTION AND RESOLUTION AT 2017 AGM,” 24 November 2017 – However, there is no real distinction (other than a poor attempt by the SAPA at a rebranding exercise for PR purposes) between ‘ranch’ and ‘canned’ lions (Ref: “Myth 8 – “Ranch lion hunting” is just the same thing as “canned hunting””– there are no proven conservation and/or ‘fair chase’ credentials for either category as conjured by the SAPA

The PHASA’s previous stance, distancing itself from ‘canned’ was deemed potentially pivotal at the time.

This PHASA regressive U-turn has not only drawn widespread condemnation (Blood Lions, Campaign Against Canned Hunting) from those opposed to ‘canned’ hunting and captive breeding for profit (as advocated by the South African Predator Association (SAPA)), but has garnered an immediate disassociation from the PHASA by hunting associations and outfitters, such as:

“The Operators and Professional Hunting Associations of Africa are deeply troubled by the decision made by PHASA at their AGM on November 22, 2017 to adopt a new constitution that accepts the practice of captive bred lion hunting. The practice of captive bred lion hunting inevitably brings the entire African hunting industry, in every African nation where hunting is permitted, into ill repute” – Campaign Against Canned Hunting 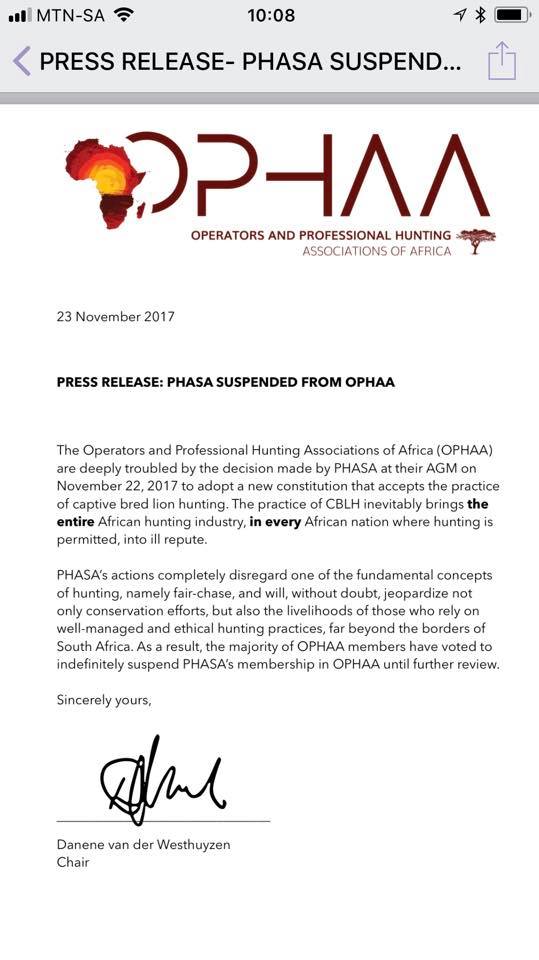 CEO Tanja Dahl said “The approval of this motion flies in the face of all that is deemed to be ethical hunting by the overwhelming majority of hunting associations in Africa and around the world.  This is in direct conflict with the aims and objectives of NAPHA, and NAPHA distances itself from the short sighted and immoral decision taken by PHASA and as such, can no longer afford or wish to associate itself with PHASA” – Campaign Against Canned Hunting 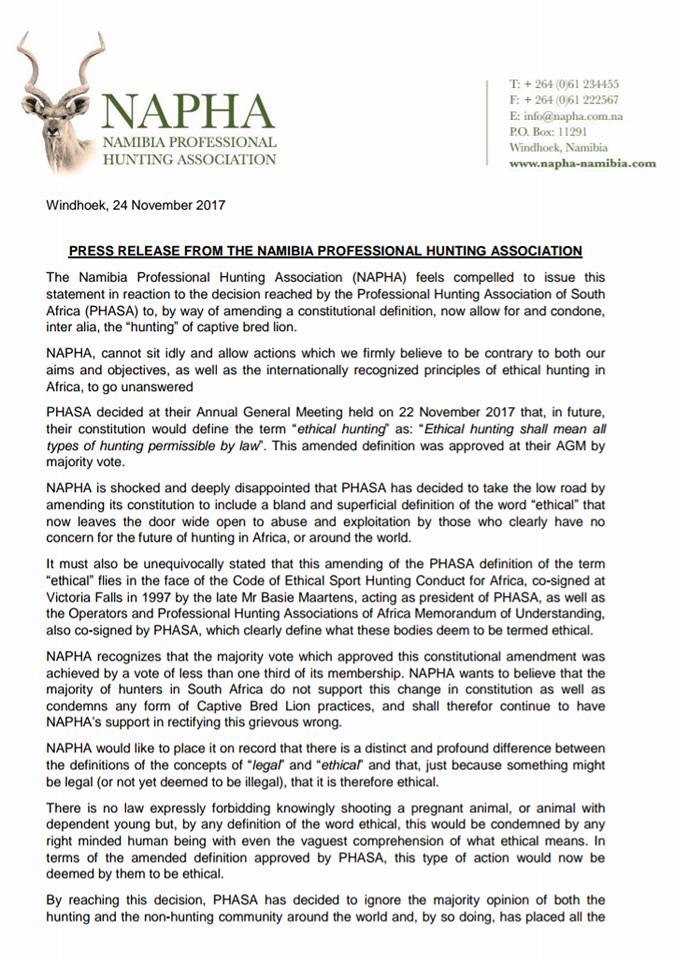 Elements of the hunting industry, desperate for ‘reputable’ (sic) Public Relations are keen to disassociate themselves from the PHASA (and by default, the SAPA).

When will South Africa (the Department: Environmental Affairs (DEA)) also acknowledge the damage being done to brand South Africa (not to mention conservation) with the abhorrent captive lion and big cat breeding industry she harbours within her borders?

“Revealed: Sick trade in lions taken from their mothers, reared by humans and shot by ‘hunters’ in tiny enclosures before having bones sold as trinkets,” Daily Mail, 26 November 2017