An article in Nature (“Why Chinese medicine is heading for clinics around the world,” 26 September 2018) presents the alarming prospect of ‘Traditional Chinese Medicine’ (TCM) being endorsed by the World Health Organization (WHO):

“….expect that the inclusion of TCM will speed up the already accelerating proliferation of the [TCM] practices and eventually help them to become an integral part of global health care“

“In response to queries by Nature, the WHO said that its Traditional Medicine Strategy “provides guidance to Member States and other stakeholders for regulation and integration, of safe and quality assured traditional and complementary medicine products, practices, and practitioners”” 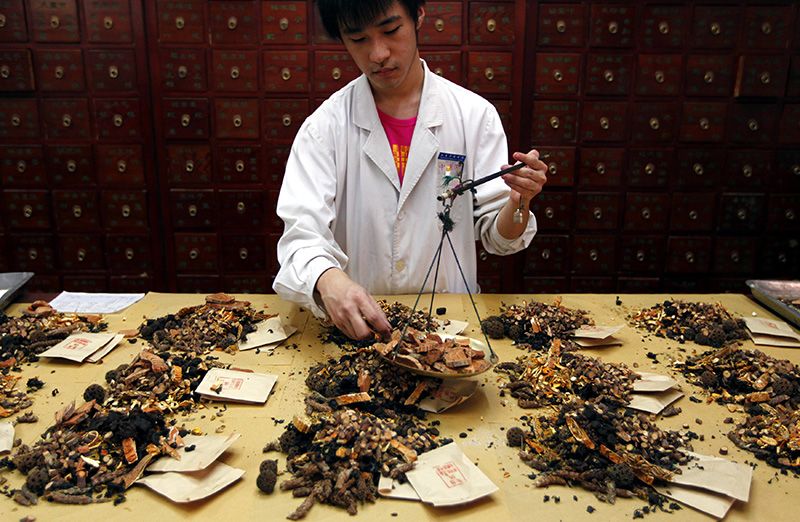 “A pharmacy in a traditional-medicine hospital in Beijing dispenses medications” – Credit: David Gray/Reuters – “Why Chinese medicine is heading for clinics around the world,” Nature, 26 September 2018

It should be borne in mind, that many such TCM ‘remedies’ lack any, independent science that prove its efficacy as a ‘remedy’ (and can be quite the opposite):

“Critics view TCM practices as unscientific, unsupported by clinical trials, and sometimes dangerous: China’s drug regulator gets more than 230,000 reports of adverse effects from TCM each year” – “Why Chinese medicine is heading for clinics around the world,” Nature, 26 September 2018

“The risk of human health and safety posed by zoonosis (an infection or disease that is transmissible from animals to humans under natural conditions) including tuberculosis, parasite transmission and possible exposure to lethal immobilising compounds (if the animal is humanely immobilised before being shot) that may have deposited in the [lion] bones” –  EMS Foundation quoting from “Dying for a Myth,”  CACH, 2017

What would the WHO’s endorsement mean for wildlife parts and derivatives used in such TCM ‘remedies?’

“Here’s what TCM really looks like: the horrific slaughter of the last remaining rhinoceroses in Africa in order to hack off their [horns], which are sold to become part of elixirs that some people mistakenly think confer strength or virility” – “WHO Endorses Traditional Chinese Medicine. Expect Deaths To Rise,” Forbes, 1 October 2018 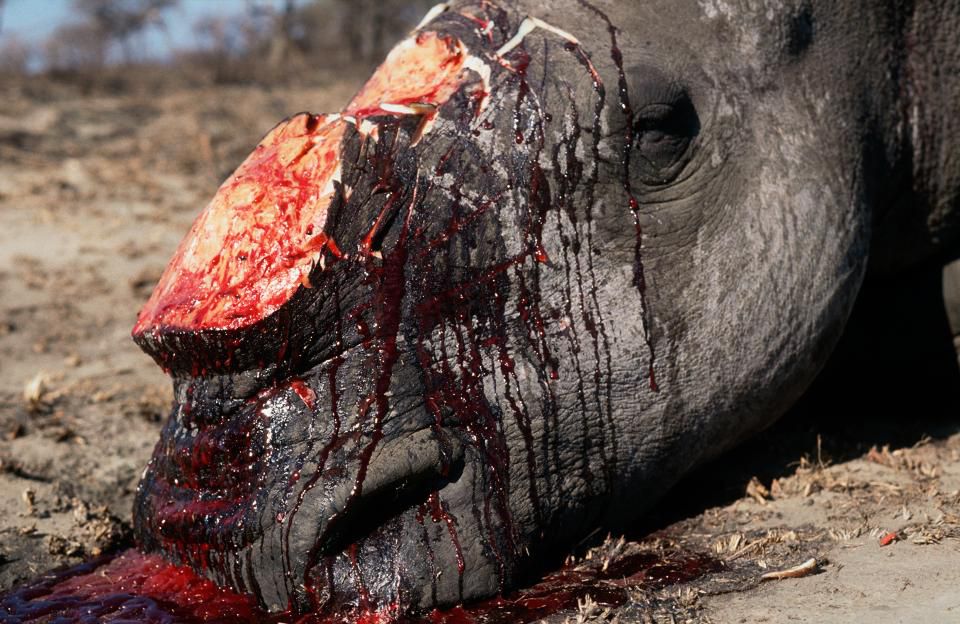 “This white rhinoceros, an endangered species, has been killed by poachers solely for its horn, with is ground and used in traditional cures for sexual dysfunction in Asia” – Credit: Getty Royalty Free – “WHO Endorses Traditional Chinese Medicine. Expect Deaths To Rise,” Forbes, 1 October 2018

For example, if we look at the plight of the African lion, what is CITES’ (Convention on International Trade in Endangered Species of Wild Fauna and Flora) current ‘thinking’ on the use of lion skeletons, with the bones used in TCM products such as ‘Tiger Bone Wine’ and ‘Cakes’?

“Given concerns relating to the recent and ongoing decline in lion populations across much of Africa, and the recognition that trade in lion bones and body parts is a major threat, a dedicated Resolution on African lions would be helpful, in order to provide Parties with more specific guidance on the control of trade and the implementation of the provisions of the Convention in respect of the species” – SC70, Doc 54.2, page 9 “Conclusion“

How exactly does the WHO’s endorsement legitimising, for example ‘Tiger Bone Wine’ counter the “recognition that trade in lion bones and body parts is a major threat” to the species (Panthera leo) in the wild?

In the Report of the Secretariat and the Animal Committee (SC70, Doc. 54.1) to the same CITES Standing Committee, the TRAFFIC study (dated 2 August 2018) is given at the Annex of the report. It paints a damming indictment of how poorly the on-going ‘trade’ is understood (by CITES, South Africa’s Department of Environmental Affairs etc.) and the clear risks this lack of understanding represents for negative and illicit activity (as highlighted in “The Extinction Business,” July 2018) to flourish that will further imperil Panthera leo:

“The role that Lao PDR plays is unclear. According to South African export data, Lao PDR has been one of the major legal importers of lion bones, and it has been suggested that Lao-based companies have been issued import/export quotas for importing lion and tiger products although this could not be verified. However, Lao PDR itself has not reported the import/export of any lion products to CITES and the Lao PDR Scientific Authority stated there have not been any imports/exports of lions and that no lion farming takes place. It is important that clarity is provided by the Lao PDR and South African Governments regarding the true nature of trade between the two countries” –  SC70, Doc. 54.1, page 10

“Our research has found little evidence for consumption within the country, but instead Lao PDR appears to be acting mainly as a transit location for lion bone products destined for Viet Nam or China” – SC70, Doc. 54.1, page 10

“There are also indications that Chinese nationals are travelling to neighbouring countries and purchasing lion products and taking them back to China. This cross-border trade does not appear in the CITES Trade Database, if trade is occurring then it is important to clarify why it is not included in each of the countries’ annual report” – SC70, Doc. 54.1, page 11

2.  There is the prospect of China expanding its own commercial lion breeding facilities to meet stimulated/increased demand from the lion bone trade:

“Captive lions are present in China, including at facilities  holding other species such as tigers [in contravention of CITES], which could be the source of the lion skeletons used in the wine” – SC70, Doc. 54.1, page 11, para 3 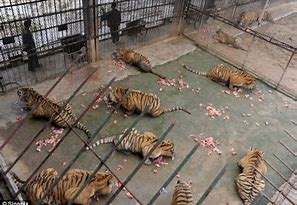 “There are concerns relating to the role of organised criminal networks operating between African range States and South-East Asia, and their possible involvement in the trafficking of lion specimens and specimens of other CITES-listed species” – SC70, Doc 54.2, page 9, para. 3

“Lion farming may increase in consumer countries, and some South African farmers appear willing to export live lions to these countries which would help establish/increase farming. As live lions are not explicitly detailed in the CITES listing-annotation it is not clear how this will be addressed, although the South African CITES Scientific Authority is treating permit applications for live lions with caution in case they are acting as a proxy for skeleton exports” – SC70, Doc. 54.1, page 12, para 4 – Note: There is no quota on the live export of lions from South Africa, so the South African Scientific Authority’s reported “caution” could evaporate if commercial incentives take priority.

How does any of this sound like demand reduction is being prioritised by the WHO* and CITES in the name of wild species’ conservation, when both bodies seemingly endorse chaotic ‘legal’ trade (stimulating illicit trade) in wildlife products for unproven TCM purposes?

“It seems that there may be an element of opportunistic poaching by hunters who have heard that lions are now valuable so will take one where possible— the apparent ease of poisoning lions makes it a relatively low risk activity as there are no gunshots fired to alert rangers” SC70, Doc. 54.1, page 11, para 5

“By endorsing TCM, the WHO is taking a big step backwards. Let’s hope that the current leaders of the WHO will realize that this step undermines their core mission. The WHO should not advocate treatments that not only have no evidence to support them and that can cause real harm to patients, but also are the primary reason that humans are hunting rhinoceroses, tigers, pangolins, and other animals to extinction” – “WHO Endorses Traditional Chinese Medicine. Expect Deaths To Rise,” Forbes, 1 October 2018

* “The WHO’s support applies to all traditional medicines, but its relationship with Chinese medicine, and with China, has grown especially close, in particular during the tenure of Margaret Chan, who ran the organization from 2006 to 2017. In Beijing in November 2016, Chan gave an address full of praise for China’s advances in public health and its plans to spread traditional medicine. “What the country does well at home carries a distinctive prestige when exported elsewhere,” she said” – (“Why Chinese medicine is heading for clinics around the world,” 26 September 2018) 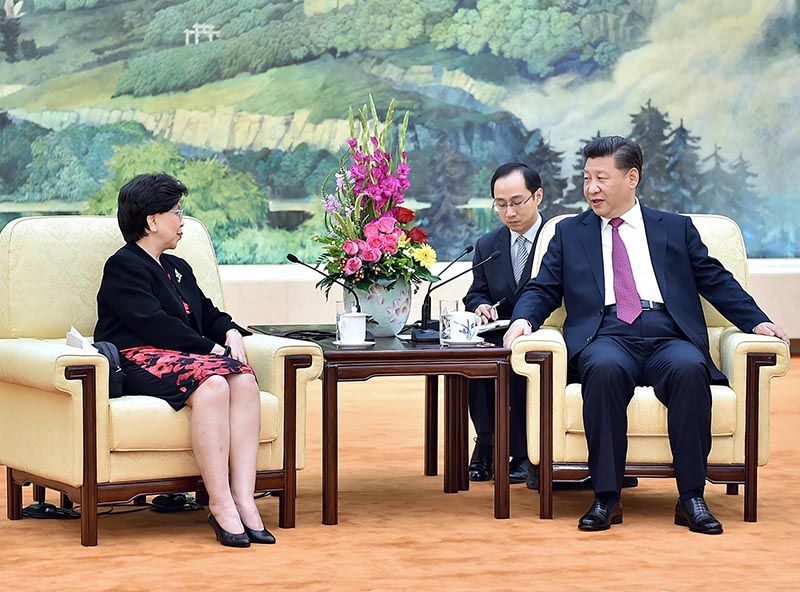 “During a meeting in Beijing in 2016, China’s president Xi Jinping talks with Margaret Chan, then director-general of the World Health Organization” – Credit: Xinhua/Photoshot

2 thoughts on “Increased Threat to Wildlife from Traditional Chinese Medicine”