As we approach World Health Day on Tuesday, 7 April 2020 – please join the call to end wildlife markets/wildlife trade across the globe to protect human health, including re-emphasising the inherent human health risks of tuberculosis (TB) transmission from the lion bone trade.

World-wide, TB has been infecting and killing millions of humans every year, yet the Republic of South still seeks to sustain a “sustainable utilisation” industry from exporting lion bones for use in Traditional Chinese Medicine (TCM), when there are no health checks of such exports  – the risk/liability the Republic of South Africa is taking to maintain income from lion bone trade exports is immense, or could the human health risks of transferring zoonotic diseases, such as TB now be realised following the COVID-19 pandemic? 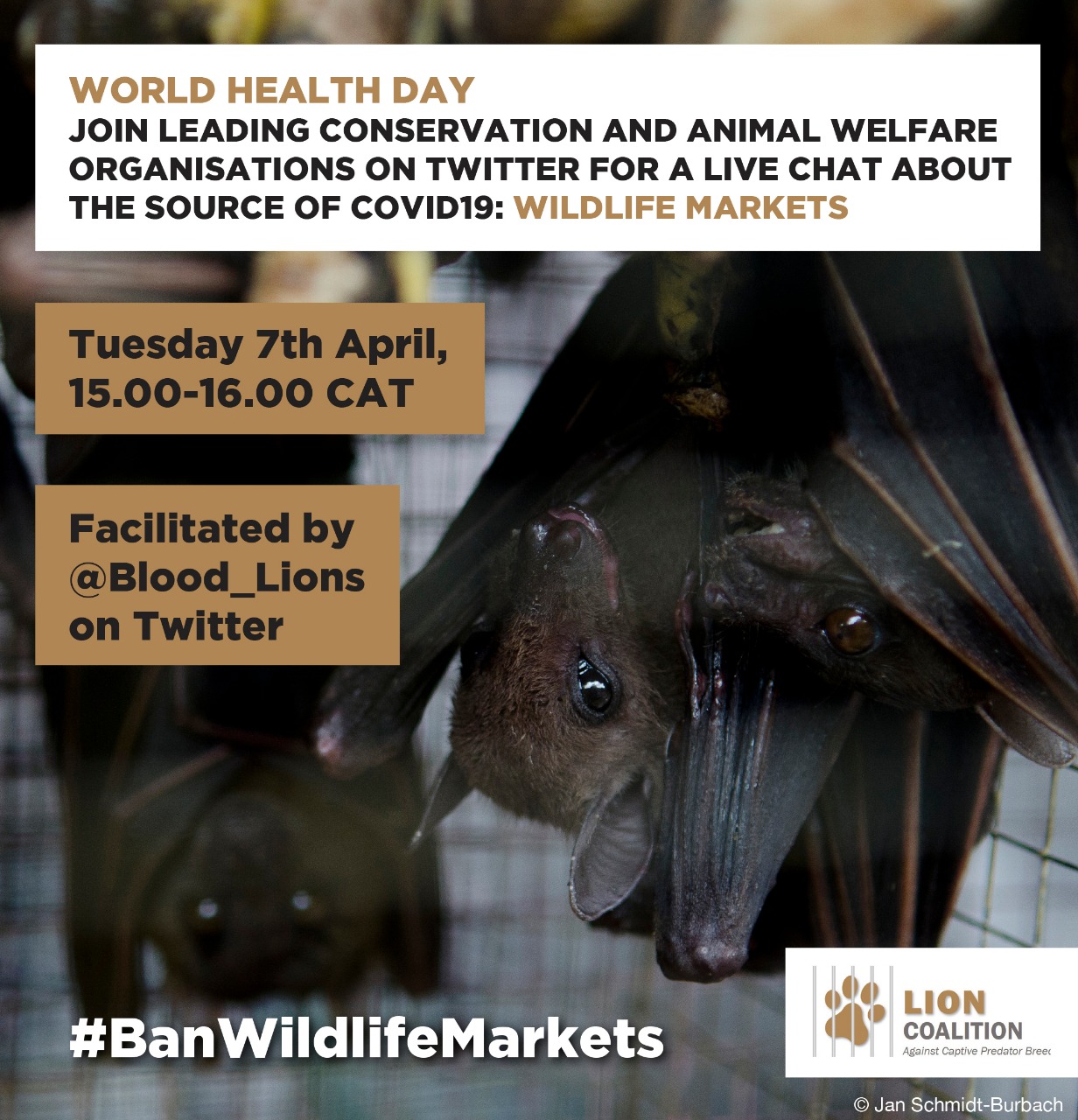 In the following article, by Don Pinnock – “Living with wild animals, Part One: Cash cows or fellow beings?” Daily Maverick, 1 April 2020 – the current coronavirus (COVID-19) epidemic is a wake-up call – human dominance and abuse of wildlife in the name of “sustainable utilisation” has taken the human global population to the brink of a health crisis and economic collapse. Without a rapid rethink and policy change, from one of wildlife and animal utilisation to one of compassion, then the next inevitable zoonotic pandemic could be even worse than COVID-19. Wildlife/animal utilisation and compassion appear incompatible with the realm of sustainable utilisation, profiteering and killing of wildlife for entertainment – it’s time to decide which is more important for the future health of our species, all other species and the planet we all share.

The world is witnessing an unprecedented, human-induced collapse of biodiversity and is in the middle of a global pandemic caused by the consumption of wild species often kept in cruel, unsanitary conditions. Laws insisting on animal welfare and legal rights would have prevented this.

Let’s face it, we treat most fellow animals very badly and rationalise ourselves into complacency. In addition to vast feedlots and hatcheries, we’re penetrating deeper and deeper into wild areas, clear-cutting forests, and are shaking loose viral contagions like the Covid-19 pandemic.

Most of our diseases are zoonotic – derived from animals. Hundreds are known, thousands more are lurking in non-conventional food like pangolins, civets, snakes, lion bones, bats, primates and bush meat. It’s time to take a hard look at how we regard the wild creatures with whom we share this planet.

Wild animals are regarded by humans in two very different ways: as commercial objects or with compassion. The position we take has to do with how we ourselves engage with the world.

According to David Bilchitz, a professor of Fundamental Rights and Constitutional Law at the University of Johannesburg, one view, sustainable use, sees wild animals solely in terms of their benefit to human beings. If they pay, they stay. It’s often wrongly cited as being based on the Constitution.

“This approach essentially rejects the notion that individual animals have worth and interests in their own right and are deserving of respect,” says Bilchitz.

“It regards their lives and welfare as having very minimal value compared to the importance their use may have for human purposes. The interests of animals are subordinate to the economic benefits humans may achieve from their existence.”

According to this view, human self-interest is the lens through which the animal world is viewed and there’s very little reason not to use an animal in a way that advances that self-interest.

This is essentially the logic of a virus: you can damage your host as much as you like but, if you want to survive, be sure not to kill it, so you can keep using it. This makes sense from the point of view of a virus, but is bad news for a host.

The notion that Earth is here for our use and pleasure is deeply embedded in our collective assumption. It has served us well until now. But with the human population edging towards eight billion and crowding out spaces and species, that assumption needs a rethink. We have to rebalance our relationship with the natural world. Covid-19 is a warning of what happens when we don’t. How do we do this?

The 18th-century English jurist Jeremy Bentham said of animals: “The question is not, Can they reason? Nor, Can they talk? But, Can they suffer?”

When we took over the world, wild animals, by default, became our subjects. Their welfare increasingly depended on our compassion. In its absence, they suffered.

Sustainable use is the polar opposite of compassion. It’s about our use of “things” with little regard for the individual suffering of those things. Applied to individual creatures, it’s very often extremely cruel.

The ability of animals to suffer is central to the idea of animal welfare, an approach that Bilchitz calls “integrative”. This requires an attitude of respect for individual animals that make up a species, an ecosystem and biodiversity itself.

What’s important to this approach are “relationships between individual animals and the environment in which they live, including their connection with human beings”.

These two poles in our engagement with wild animals are not simply abstract ideas, but are reflected in international treaties, national legislations, NGO campaigns and local protests in many countries.

In September 2015 the United Nations General Assembly adopted a resolution on sustainable development called Transforming Our World. It proposed 17 goals, number 15 of which was to “protect, restore and promote sustainable use of terrestrial ecosystems, sustainably manage forests, combat desertification, halt and reverse land degradation and halt biodiversity loss”.

Hidden within the obvious reasonableness of the goal was an assumption that wildlife is here for our use. Unfortunately, the history of human “use” of nature is more akin to plunder and “use”, in the long run, often tends to undermine sustainability.

The idea of sustainable use was reinforced at the UN Convention on Biological Diversity in February this year. In building a “2020 global biodiversity framework”, one of its targets is to “enhance the sustainable use of wild species providing, by 2030, benefits, including enhanced nutrition, food security and livelihoods for… people”.

Sustainable use is also embraced by the Safari Club International, the world’s largest hunting association. It has a legal advocacy department that promotes hunting internationally and what it terms “sustainable use conservation” [sic], the idea that killing wild animals assists in their preservation.

Support for sustainable use, touted as progressive wildlife management by such international organisations, is cascading through national and local systems. It’s the justification for activities like canned lion hunting, bear bile and tiger farms, the consumption of wild animals that kicked off the coronavirus pandemic and, of course, trophy hunting. It has nothing to do with the biodiversity conservation that Transforming Our World seeks to promote.

In his famous book, The Outermost House, written in 1926, the environmental writer Henry Beston took a different view:

“Earth’s wild creatures are not our brethren, they are not underlings. They are other nations, caught with ourselves in the net of life and time, fellow beings in the splendour and travail of Earth.”

Sustainable use has become the dominant mantra of the [Republic of South Africa’s] Department of the Environment, Forestry and Fisheries and the Department of Agriculture.

In the second part of this discussion on wild animals – Eat them like there’s no tomorrow – we’ll look at how this came to be. 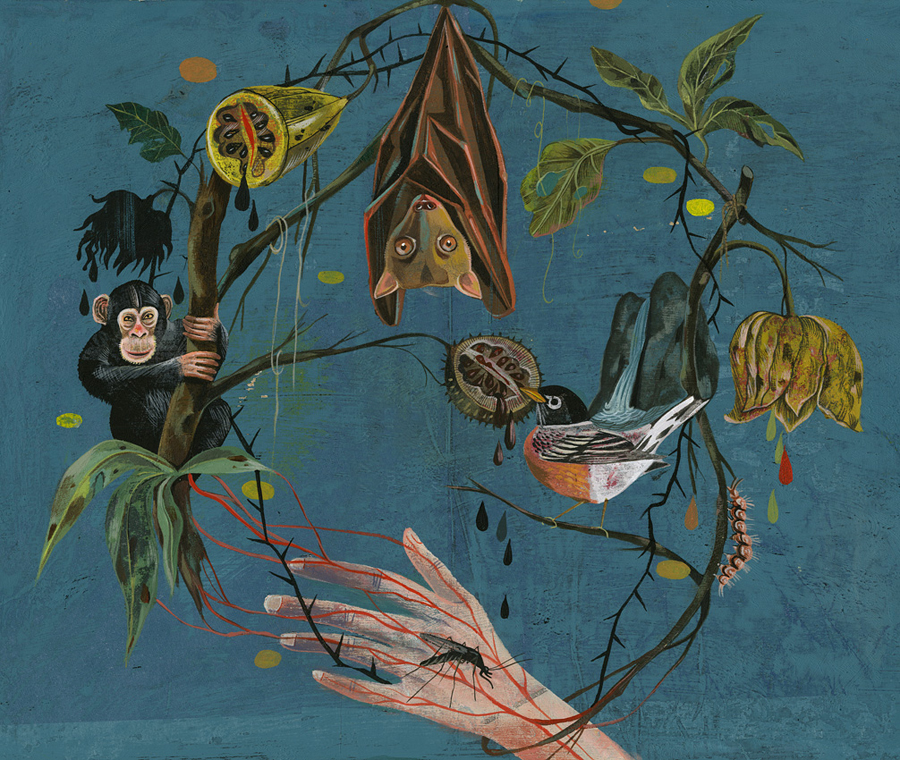