Having read a number of the comments on the “Hunters Conserve Wildlife” debate, I noticed in particular hunters’ comments about Kenya and the decline in wildlife “due to Kenya’s hunting ban” which first initiated back in the 1970’s. I felt compelled to write in and address the naivety on this matter.

My family lived in Kenya for 35 years. I was born and raised there. So you could say my family has a fair knowledge of the country.

We all know too, wildlife throughout the African continent is presently under enormous strain from international organised crime syndicates. These ‘syndicates’ seem protected and immune from authorities in their chosen strong-hold within the Golden Triangle, the forested borderlands between Laos, Thailand, Myanmar and China.

These ‘syndicates’ head the targeted poaching of endangered and threatened species, putting the targeted  species on the fast track to extinction. Kenya is not exempt from the eroding decay of poaching’s impact, together with illegal bush meat trafficking, a burgeoning population encroaching on land space, over-grazing of livestock and therefore an increased probability of human/wildlife conflict etc. It is easy to quickly ascertain the real reasons why Kenyan wildlife has suffered, poor land management that could/should have been avoided.

A senior policy advisor for the Born Free Foundation UK recently stated the revenue brought into “Magical Kenya“alone from wildlife photo safaris is $1 billion dollars compared to the $234m USD (Table 1) taken by ALL the combined African countries that allow hunting.

Across 9 African countries (Table 1), trophy hunting revenue is only 1.77% of general tourism income.

Note 1   – It is not clear in the context used if ‘Trophy Hunting’ includes, or excludes ‘Canned Hunting.’

Note 2 – It is not clear how Governments set their permitted hunt quotas – It is not often scientific and is suspected to be corruption (reference “Trophy Hunting in Sub Saharan Africa: Economic Scale and Conservation Significance”- Peter A Lindsey, 2008, para4.2, iii) many cases, Government revenue appears the  main driver.

So, as hunters cannot hunt in Kenya and yet the hunters state their dollars for hunting are vital for  conservation (so as a consequence Kenya has suffered), would seem to be bogus. Kenya had the ability to manage land in the absence of trophy hunting, but initially Kenya failed to do so.

*The share of Travel & Tourism spending or employment in the equivalent economy-wide concept in the published national income accounts or labour market statistics.

Furthermore, according to Forbes:

“Among the major countries projected to experience significantly strong Travel and Tourism GDP growth will be India, China, Thailand, Indonesia, Peru and Kenya” – Forbes, 6 May 2015

When a rhino, elephant, lion etc is slaughtered by a hunter, then that animal is gone forever. Alive though, the value of that animal is far greater from its reproductive potential perhaps, but also for repeat photo tourism opportunities it brings in during its (and its potential off-springs) lifetime, plus the livelihoods of the many locals employed to support that whole network infrastructure of photo tourism safaris.

The so-called “conservation” claimed by hunting is an archaic and selfish concept that hides behind a thin veil of deceit to continue to justify its existence. Very little revenue from hunting actually ends up funding wildlife initiatives.

Roderick Campbell of Economists at Large questions the value of trophy hunting to profit anything other than gun shops and hunting outfitters, pointing to a report by the UN Food and Agricultural Organization that found only 3% of hunting revenue went to communities living in the area. “Local communities are key stakeholders for conservation initiatives,” he writes, “yet they receive minimal benefits from trophy hunting.” In some areas, the limited trickle-down from trophy hunting could, in fact, be fuelling support for poachers, who pay shooters and bearers in cash.

The Trophy Hunter’s “Badge of Cowardice”

“A real hunter kills for survival, never for sport. Taking an animal’s life is a sacred thing” – says Mr. Norm Blaker, an 82 year old hunter who has hunted throughout the United States and Canada with hunting legends Fred Bear and Kiko Tovar. “Killing is no sport” Mr. Blaker concludes with finality – Ben Block, “The Badge of Cowardice: Trophy Hunting Big Cats,” Ranger Diaries.com:

“I became aware of the scourge called trophy hunting while working with conservation and anti-poaching units in northern Zululand. While we focused on African Wild Dogs and Black Rhino, nine lions were also under our protection. During my time in South Africa, I heard stories of trophy hunts, watched videos of them and witnessed parts of hunts unfold first hand. My initial sympathy for trophy hunters (as I hunt whitetail deer once a year for consumption) faded as their selfishness, ignorance and recklessness became clear. My experience working with lions in the wild, position as a hunter, university study in biology and employment at a conservation genetics laboratory revealed the damnable, dangerous and destructive nature of trophy hunting.”

“Hunters’ claims that they support the conservation of a species through paid destruction of an animal are unfounded and ludicrous. Coupled with the cowardice of trophy hunters are the unethical practices they use.” 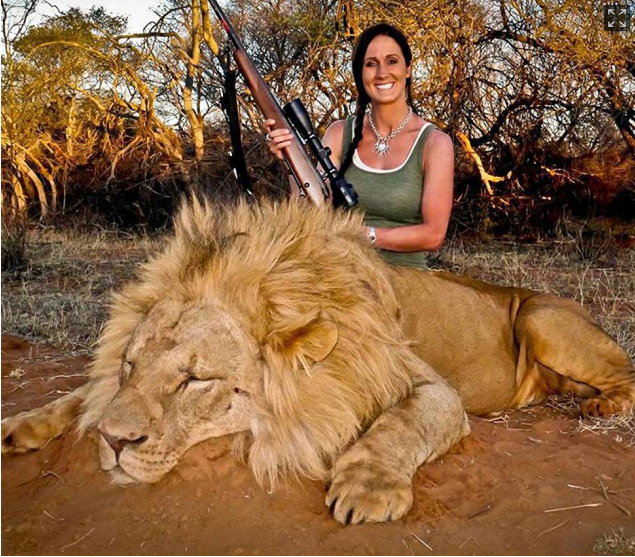 Humans are in the process of bringing about the Earth’s sixth extinction of life forms. From a population of more than a million African lions in the mid-19th century, there are maybe 20,000 African lions left in the wild (“How do ‘We’ Save Panthera Leo?“). Around 36,000 elephants are falling to rifle bullets each year for poached ivory and trophies.

Over 1,000 rhinos were poached in the species’ heartland of South Africa’s Kruger Park last year.

In the face of such alarming decimation, can we really afford to let some amongst us kill for personal pleasure, even just one of our planet’s precious wild creatures?