As we know, there is bloody battle to save rhinoceros from the poachers’ brutal onslaught, particularly in South Africa, the last natural rhino strong-hold.

“Further reports came in this morning around 04h30 of yet another two rhinos found dead in a private reserve in South Africa. It feels like a huge giant has grabbed me around the throat adamant to squeeze all life from me. As much as we may like to ignore the fact each and every rhino is now super important to prevent the genetic depletion that could lead to their ultimate extinction in the near future” – Louise Joubert, SanWild Sanctuary, South Africa, 6 April 2016

‘Vinnie’ (pictured below) is a traumatised baby rhino – he did not succumb to the poacher’s machete when he remained steadfastly by his mother’s side, as the poachers hacked her life away (to meet the nonsensical demand for rhino horn and $$$).

In order for Vinnie to live a fairly normal rhino life again, he must be saved from the potential ordeal and despair of a future life in captivity; first bereft of family, then his freedom.

“We have worked so hard to give Vinnie a safe future, but time is running out and we are not anywhere near securing the funding to do this rescue….we have to raise at least $10 000 USD” but so far the target due 18 April 2016 is not within sight. Can you help please? “If we fail Vinnie will be sold and exported to life in captivity……” –  a potential additional tragic consequence of the poacher’s merciless machete – Louise Joubert, SanWild Sanctuary, South Africa, 6 April 2016

Please Donate to Save Vinnie from a Life in Captivity 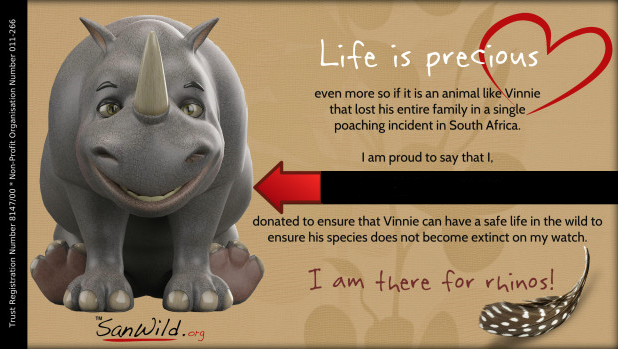 For Vinnie’s sake, to give hope that not all rhinos will succumb to the poacher’s brutality. A brutality that combined with the somewhat lackadaisical response of the authorities charged with combatting rhino poaching and the South African Government’s duplicity, could ultimately lead to the species’ complete decimation in a decade’s time (or less).

Please help by saving one rhino at a time, let’s all help Vinnie. He deserves all of our support and generosity.