The “sustainable use of our natural resources” – Opinion

After posting the Don Pinnock article (“Rhino sale bombshell hidden in new raft regulations,” Daily Maverick, 27 February 2017) the feedback received was ‘interesting’ – explaining the South African’s right to make “sustainable use of our natural resources” and “environmental right is primarily a human right whose purpose is the protection of human health and well-being….”

So, let’s take a look at that and how it’s applied specifically for rhino (but with read across to all other species so “sustainably” used/utilised).

South African’s constitutional rights on the issue of ‘sustainable’ wildlife utilisation are enshrined at Section 24, “Chapter 2, Bill of Rights, Environment:”

“Everyone has the right:

(i) prevent pollution and ecological degradation;

“…..an environment that is not harmful to their health or wellbeing”

It is not exactly clear to me how it could be argued that Section 24, (a) is applicable to the harvesting, trading and profiting from rhino horn farming, or rhino trophy hunting (or canned lion hunting/farming, bone/skeleton trade)?

“Reasonable legislative and other measures”

The Constitution, Section 24, (b) suggests “reasonable” measures can be taken to “promote conservation” and “sustainable…..use of natural resources.”

What is “reasonable” (a subjective term) when applied then to two “sustainable” rhino related scenarios?: 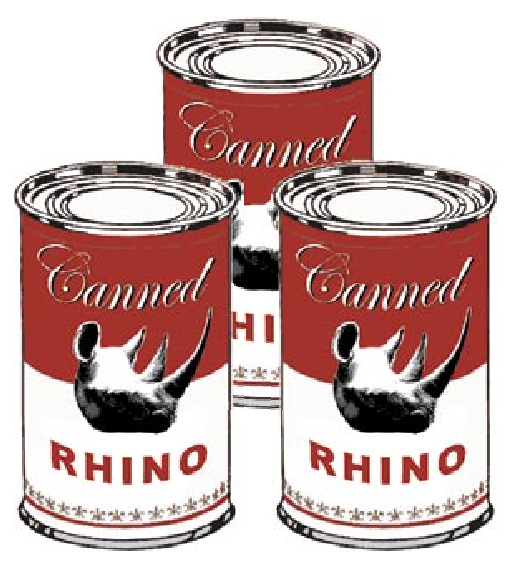 As a working example, I am reminded of the “Kuruman canned rhino hunt” (as described in “Kalahari Dream”) [1] and the apparently ‘legal’ “reasonable, sustainable…..use of natural [rhino] resources.”

Basically, what happens when an adult, female (cow), White rhino is not sufficiently aware, or absently forgets that it has been deemed a “sustainable resource” earmarked to be executed by a fun-loving trophy hunter?

David Erwee in this case, was just out for kicks and a bit of “sport” (sic) after legally buying said rhino at a game auction in 2001. Of course, somewhere the delusion is conjured, that this particular female rhino’s killing somehow positively contributed to conservation of the wild species (i.a.w. NEMBA, the Constitution and Threatened and Protected Species (TOPS) regulations).

Regardless, the account of this rhino’s killing in a fenced-off Kuruman industrial park started at 9am the same day of said purchase at a nearby game auction:

It sounds made up doesn’t it? The dedication and lengths some will go to sustainably utilise natural resources (in the name of conservation) and thereby protect their human health and well-being as an added bonus/necessity.

I am not sure about you, but the above “sustainable use of our natural resources” does not appear “reasonable” when considering ethics, morals, the suffering/exploitation and dubious contribution of  anything meaningful to conservation. 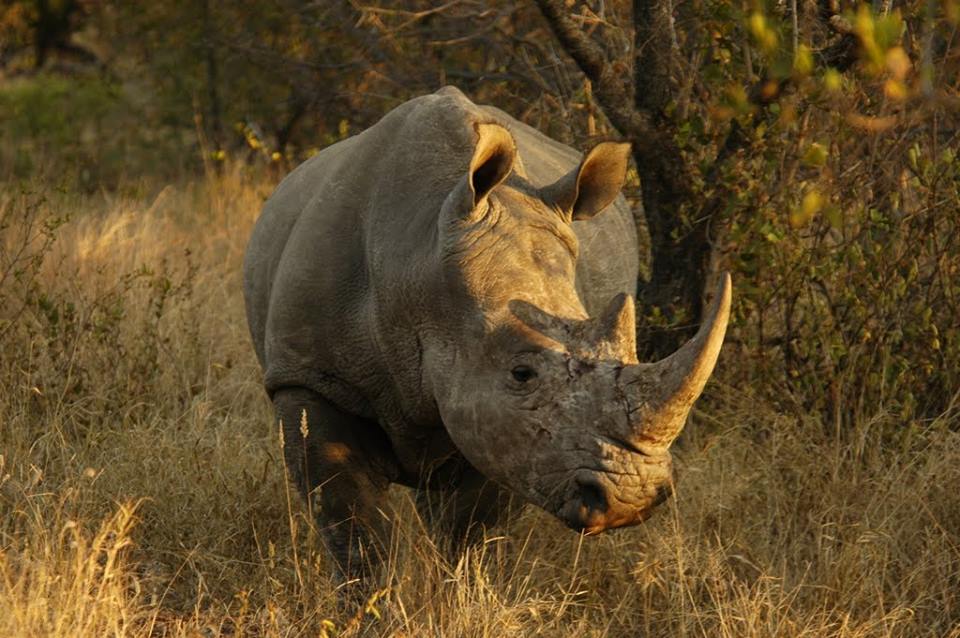 The weight of independent academic/science evidence suggests that any proposed ‘legal’ rhino horn trading system is (on the balance of probabilities) likely to stimulate market demand.

But rather than stymie the currently incumbent criminal syndicates illicitly profiting from trafficking poached/stolen rhino horn, such ‘legal’ trade is likely to escalate illicit rhino poaching activity and other illicit behaviour, hence why  the 2009 rhino horn trading moratorium was instigated.

Some suggest that such negative ‘evidence’ is of course just ‘opinion’ (never mind the academic credibility behind some referenced sources). Therefore, it has no legal relevance, which must be based on proven “facts:”

If one takes ‘legal’ “sustainable…..use of natural [rhino] resources” to its logical conclusion (ignoring any negative ‘scaremongering’ of course), then the likely, inherent risk to wild rhino is a regrettable casualty:

Critically endangered, endangered, vulnerable, or protected “species, being any indigenous species facing a high risk of extinction in the wild……”

The DEA claims that the Notice 74 draft Regulations for ‘domestic’ (and export) of rhino horn as a “Long-term Sustainability Intervention” – so where’s the proof the draft Regulation’s consequences are a long-term sustainability intervention and a “secure ecologically sustainable development” for the “national protection” of wild rhino (i.a.w The Constitution/NEMBA)? Where is the science to back the claim?

“The notion of “contested legality” was introduced as a legitimation strategy of important actors who justify their participation in illegal or grey flows of rhino horn based on the perceived illegitimacy of the rhino horn prohibition” – Hübschle (2016) , p. 366 [3].

I am not sure where it is written in any country’s constitution that ‘some people’ should be able to opt out from restrictions on “trade which people do not regard as criminal,” but I would be interested to see a public vote on whether rhino horn trading should be a legal mechanism, or not.

Conservation is given cursory lip-service when over-ridden by the rush to ‘legally,’ ‘sustainably,’ ‘reasonably‘ utilise natural wildlife resources….…but of course all such ‘legal,’ “sustainable” wildlife utilisation is above reproach, with the bonus of being good for human “health or wellbeing” isn’t it?

Of course you are welcome to express an opinion that anyone that does not share the wildlife utilisation vision is a “conservationist with fundamentalist tendencies” for daring to suggest “sustainable use of our natural resources” should only be applied when it is proven as likely to be “reasonable” (in every sense of the word and not just as an exploitative endeavour for “reasonable” income for the chosen few).

[3] “A Game of Horns – Transnational Flows of Rhino Horn,” Annette Michaela Hübschle, 2016, International Max Planck Research School on the Social and Political Constitution of the Economy

“Trade Legalisation – A Greedy Person Is The Poorest Person In The World,” Breaking the brand – stop the demand, 5 March 2017 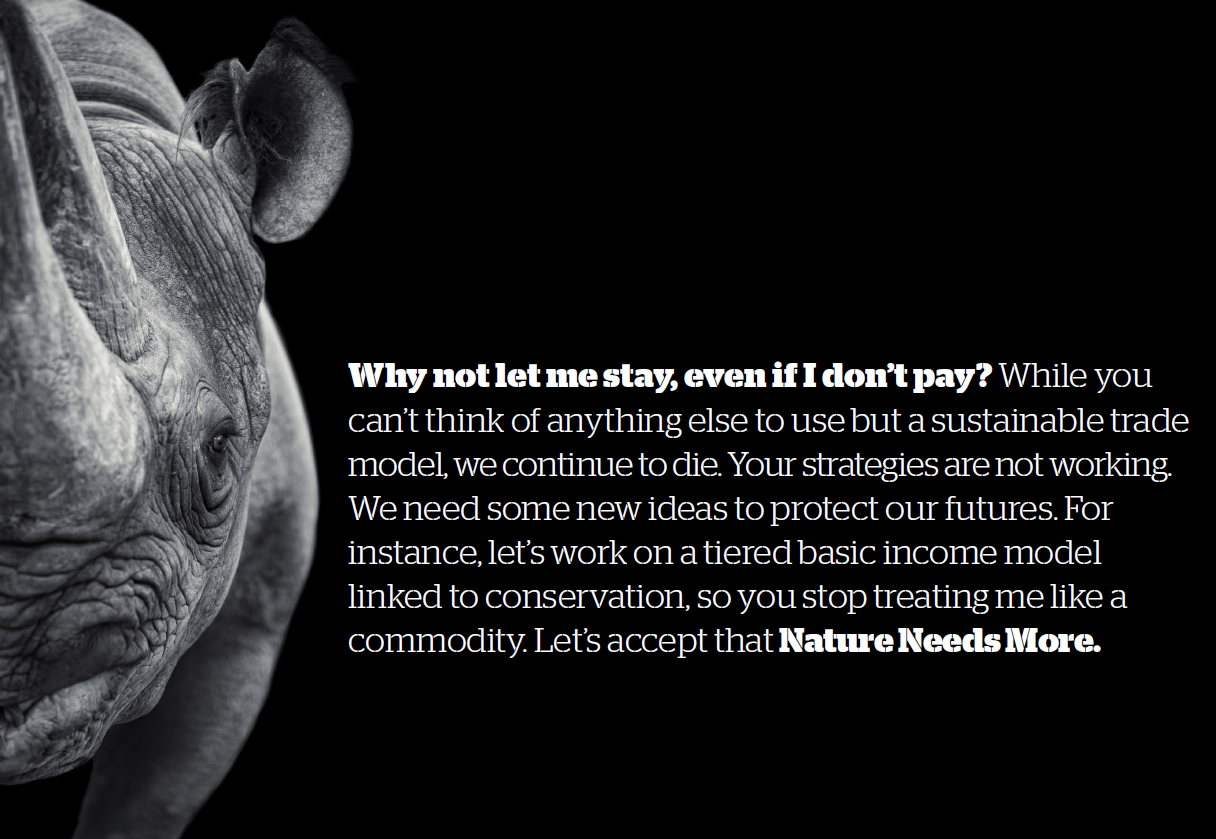 Let’s look at the “we saved the rhino” argument….Project ‘Operation Rhino’ from the 1960s.

So, which wildlife utilisation caused the 1950s rhinos’ plight in the first place? Hunting and poaching, or just poaching? Hunting was a significant factor, so when hunters say they saved the species, they basically want to be congratulated for helping to save the species from their fellow hunters’ own abuse:

The game farmers did a great job, but fell back onto rhino utilisation for trophy hunting for income (part of the problem with the species’ decline in the first place).

If you prefer the stance that poaching of rhino for horn was the main issue with the rhinos’ demise upto the 1950s, then why wasn’t rhino horn harvesting proposed then (not killing the rhino) for the benefit of the species? Instead of the action that was taken, to kill rhino for hunting trophies again was therefore misplaced. As always, it seems that the desire to kill is the compelling factor that overrides any other thinking/logic. By the way, this does not make me an advocate for rhino horn harvesting and trading either, far from it.

Why has  there been a rhino horn trading moratorium in South Africa since 2009?

TRAFFIC reported in 2008 that “some hunters have been abusing permits to shoot rhinos and export illegally obtained rhino horns – probably poached and directly linked to organised crime – as “hunting trophies.””

In a 2012 report by TRAFFIC on the global rhino trade found that when South Africa did allow domestic horn trade, before 2009, much of the privately owned horn went unaccounted for and may have ended up in illegal hands, trafficked outside the country. It found that abuses and poor compliance in managing horn stockpiles in government and private hands had helped create a “perfect storm,” attracting criminal networks into lucrative rhino poaching.

It has been suggested that the ‘upswing’ in the poaching of rhino in South Africa since 2009 coincided with a 2009 South African moratorium on ‘legal’ trade in rhino horn being initiated by the then DEA authority.

However, this 2009 ‘upswing’ in rhino poaching in South Africa could be attributed to an exponential rise in demand for rhino horn in a newly wealthy Asian middle class and the misguided ‘belief’ perpetuated around 2005/06 in Vietnam that rhino horn could be a “cure for cancer.” Regardless of the origin, or reason, the ‘upswing’ has been sharp and sustained.

This rhino horn trade moratorium is of course being successfully challenged by John Hume et al as I write, and with the current DEA on the pro-trade side, there is little doubt that the current moratorium will be lifted sometime soon, not in name of rhino conservation however (because the science to back the likelihood of any positive outcomes, and/or consideration of the likely market dynamics/criminal activity that will ensue has been conveniently overlooked),  but the moratorium will be lifted in the name of $$$ income (and everybody involved gets to profit, but probably not the rhino).

So, when it comes to the rhino, you will not mind I am sure if I don’t trust (based on historical wrong-doing) the hunters’ ethics, rhino horn farmers’ motives, DEA’s motives and any tacit support for the rhino horn trade (domestic/export/international) and its likely negative/catastrophic  impacts.  Independent academic study/research says wildlife trade (other than to profit) it is a mistake.