There is a planned “Colloquium” (workshop) on the 21 and 22 August 2018 in Cape Town, South Africa titled “Captive Lion Breeding for Hunting in South Africa; Harming or Promoting the Conservation Image of the Country[?]” The answer seems fairly obvious, the harm is manifest:

However, Hon Mr MP Mapulane (MP) does not strike me as too open minded:

“The Chairperson [Hon Mr MP Mapulane (MP)] highlighted that the concept of sustainable use has proven to assist in conservation, unlike what other people have argued [sic], especially the animal rights movement” – “Rhino Poaching; Marion Island challenges,” Parliamentary Monitoring Group, 14 August 2018

a “working paper of a report in two parts……The first is a formal academic review of the scientific and ‘grey’ (reports and newspaper articles) literature pertaining to the predator breeding industry….The second part of the report provides a framework for assessing the claims – made by the predator breeding industry – of economic significance and positive conservation value.” 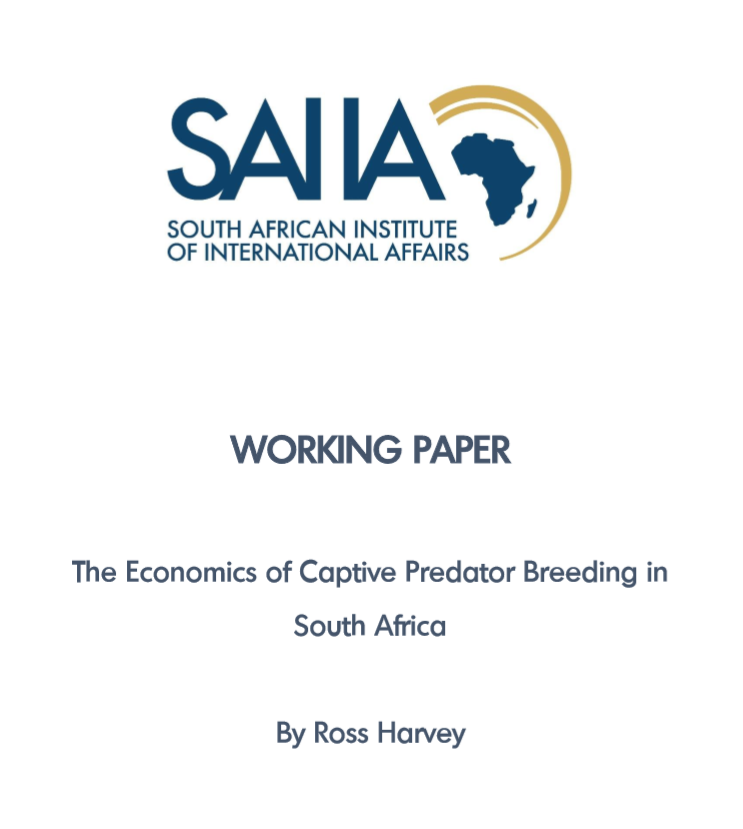 The working paper can be downloaded as a PDF file – “The Economics of Captive Predator Breeding in South Africa,” by Ross Harvey, August 2018

This working paper offers in-depth analysis, painting a damming indictment of the (scientifically unproven) claims made by the South African Predator Association (SAPA), the SAPA’s unethical deceit  and the blinkered ‘science’ used as a basis for the Republic of South Africa, Department: Environmental Affairs  (DEA) to perpetuate complicit support for ‘captive’ breeding/’lion bone trade’ – the lack of any forward precautionary principle thinking is laid-bare, such thinking clearly absent in the clamber to exploit/profit:

“…..perhaps the most surprising finding was the sheer extent to which the skeleton quota numbers for the last two years (from 800 to 1 500) appear to have no grounding in science. Also startling is how little reliable economic analysis has been conducted on this clandestine industry.”

“Given the volume of unknown variables, the precautionary principle suggests that South Africa should be cautious about permitting the export of any lion derivatives and move to a zero export quota.”

“A nail in the coffin of the captive lion breeding industry?” SA Breaking news, 22 August 2018

“South Africa has adopted a risk averse approach that is considered to be in the best interests of the conservation of the species” – Edna Molewa, Minister Department: Environmental Affairs (DEA)

So, why was the ‘lion bone trade’ launched in 2008 without any consideration of the continent-wide threats it could/does pose to wild lion populations? The Minster launched a three-year study in 2017 into the potential continent-wide threat the ‘lion bone trade’ poses to wild lions – hardly a risk-averse, precautionary approach to the species’ conservation – more like a knee jerk reaction once the exploitation and profiteering had already started.

Plus, the Minister is saying that any restrictive laws/regulations can’t be enforced – as without such legal trade (which stimulates demand), the Minster postulates that illicit trade would proliferate…….the Minister is lost in a vicious circle of her Department’s own making from 2008 – she is basically saying the ‘lion bone trade’ is now out of control whether ‘legal’ mechanisms are present to try and compete, or not(and stopping the ‘lion bone trade’ ‘would be a threat to wild lions‘ – a threat so created by the DEA and the lion breeders!).

This is the repeated downfall and hypocrisy of any wildlife trade once initiated by ‘legal’ means (be that rhino horn, ivory, tiger bones, lion bones….) – it morphs into an abusive, illicit system of greed and deceit that consumes wildlife – this is the lasting fallacy of the misuse and abuse of ‘sustainable utilisation’ (read exploitation) as some kind of universal panacea. The risks are never pre-considered (just the profit), but the same mantra and misuse repeated again and again (and spun as a best hope for any recovery of a long since lost ‘conservation’ imperative).

Ross Harvey (South African Institute of International Affairs) report titled “The Economics of Captive Predator Breeding in South Africa” estimates that “Predator breeding using lions and other species could cost South Africa over R54-billion [$3.68 bn USD] over the next 10 years in loss of tourism brand attractiveness.”