At the Campaign to Ban Trophy Hunting gathering in London on 29 June to mark the forthcoming anniversary of Cecil the lion’s untimely death, the haunting sound of Cecil’s recorded roar was played over an audio system – as speaker Peter Egan put it, the sound was a painful call from the past and as the roaring  subsided, it echoed the agonised and pitiful demise of Cecil himself.

In July 2015, Cecil was a pride male, in his prime with his off-spring in the pride. Cecil was lured (baited) to his death from the protection of Hwange National Park, Zimbabwe by an American trophy hunting dentist, Walter Palmer (and ‘Professional Hunter’ Theo Bronkhorst). 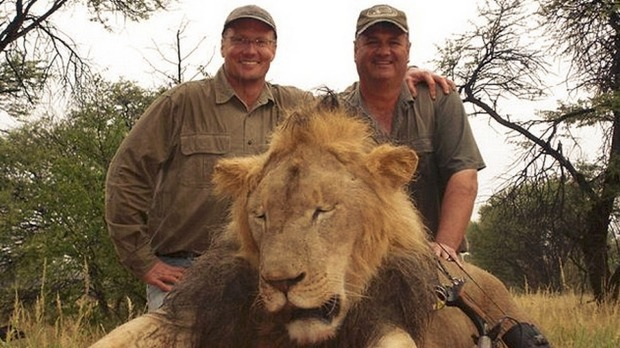 Walter Palmer (left) poses with the corpse of Cecil the lion after hunting him with his bow, wounding the leader of the pride, and shooting him 40 hours later. Photo: Courtesy of The Age

Cecil was a radio-collared lion – part of WildCRU’s research programme in Zimbabwe and the collar clearly visible – but that offered no second thoughts for Cecil’s pursuers and/or protection from Walter Palmer’s hunting party.

Cecil was shot by Walter Palmer using a cross bow bolt – it was not a clean first time kill…..Cecil, though wounded managed to struggle on and allude the hunting party for many more hours. No doubt Cecil suffered immense pain and distress in that intervening period before the hunting party finally tracked Cecil down and finished him off.

The noble art of trophy hunting is fully exposed as a sham in this shameful, self-indulgent story (and some want to pretend such actions are somehow, conservation – luring a lion into an empty hunting concession to be tortured and slaughtered is not conservation). And it keeps on happening:

Xanda another pride male (son of Cecil the lion) was lured by trophy hunters in 2017 from the protection of Hwange National Park……Skye, a pride male was  baited and lured to his death by trophy hunters on 7 June 2018 from the ‘protection’ of the Kruger National Park, South Africa – there has never been any open explanation/justification from the hunters involved, just a cover-up to mask the deceit.

A lion pride can be devastated when the pride male is selfishly ‘harvested’ by humans intent on their trophy (and the professional hunter motivated by the  income derived from the trophy seeker). The fall out from a pride male’s loss is not just one male lion, but the repercussions reverberate through the pride, resulting in potentially multiple losses as incoming males fight to establish dominance and seek to eradicate any pride male predecessor’s genetic legacy – ie. the infanticide of Cecil’s off-spring.

So Walter Palmer and his ilk, by killing a pride male, kill more than just one lion in their quest for a suitable trophy/’harvest’ to brag about and hang on their trophy wall back at their home/lodge/cave.

The trophy hunter can stoop even lower though, seeking to kill a ‘trophy’ bred in captivity and ushered into an enclosure to meet its fate/death at the hands of the noble trophy hunter – this is called ‘canned’ hunting. No matter how those that support ‘canned’/captive breeding try to dress it up, it is breeding death for profit for those humans that enjoy taking life in a cheap, (currently) legal in South Africa but sordid and immoral fashion – ‘canned’ hunting serves no other purpose than to profit from those that enjoy inflicting death.

South Africa still supports this abhorrent ‘canned’/captive breeding industry within its ‘image’ as a conservation practitioner worthy of tourism income – but the reputational damage and tarnish ‘canned’/captive breeding taints South Africa with is not so easily disguised as media attention and world condemnation builds – recent submissions to the Republic of South Africa, Department of Environmental Affairs (DEA) just serve to highlight the past delusion evident within the DEA and the self-denial of past DEA Ministerial incumbents:

The United Kingdom is currently perpetuating its support for unscientific trophy hunting, including ‘canned’ hunting – with a British safari operator promoting ‘canned’ hunting as recently as last month, vilified in the UK press – Alex Goss, and his business Blackthorn Safaris’ web-site and fb page content has seemingly vanished since the expose. 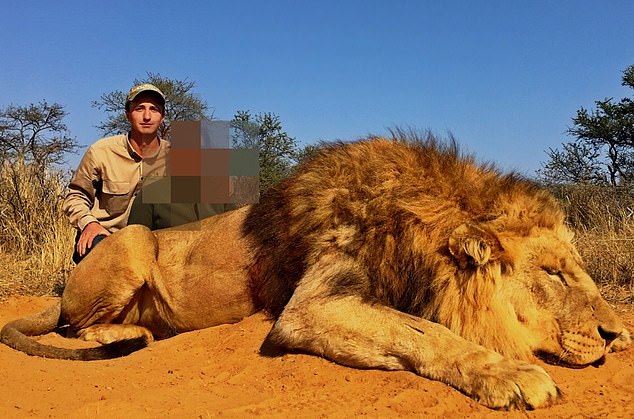 “Gruesome photographs show Alex Goss posing beside the bodies of two lions after they were slaughtered during hunts in South Africa. Goss, from Oswestry, Shropshire, owns and manages Blackthorn Safaris” – Daily Mail, 22 June 2019

The potential  import of such hunting trophies into the United Kingdom (and potential re-export by illicit means) should have been curtailed by UK imposed restrictions long ago, but the UK government dithers (the department of  the Rt Hon Michael Gove MP –  Secretary of State for Environment, Food and Rural Affairs) as profiteers such as Alex Goss, Blackthorn Safaris (above) continue to operate in the absence of clear UK restrictions – restrictions that should reflect the lack of credible, independent, peer-reviewed science to support ‘canned’ and many other forms of trophy hunting as anything other than animal exploitation, fuelled by blood lust and greed.

Trophy hunting advocates continue to lash out, with emotional rhetoric based upon ‘hunting culture’ (sic) as an excuse to perpetuate the killing.  There are no credible excuses left (and time is running out to curtail the attrition trophy hunting ‘culture’ (sic) impacts upon threatened species across the globe……).

Hunting’s economic claims don’t add up – “Which is worth more: trophy hunting or wildlife tourism?“

LionAid estimate that the value (of an adult male lion) to be $890,000 in tourism revenues to a National Park in Tanzania – the Serengeti.

The FT’s journalist, Mr Guthrie estimated that the net present value of any lion (not just an adult male) is some $179,000 in tourism value – so a lion is worth more than four times the value alive than as a hunting trophy (the typical trophy hunting value of a mature male researched by the FT was found to be around $40,000, with just $13,500 for a young “canned lion” – bred for the bullet in South Africa).

Mr Guthrie’s article concludes that “wildlife tourism and trophy hunting are not always mutually exclusive. When conflicts arise, Africans should kick out the hunters.”