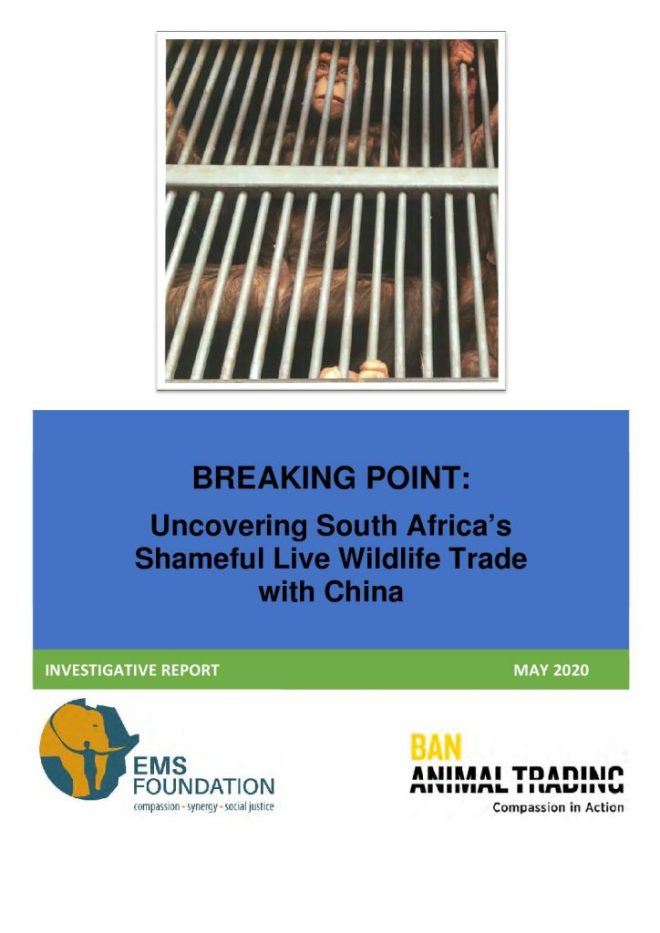 Image Credit: Karl Ammann on location in China. Karl Ammann is a conservationist and wildlife photographer 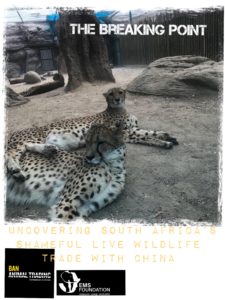 “South Africa has become the largest exporter of live wild animals to Asia, where many wild animals are killed to extract potions from their carcases and are eaten as delicacies. Some are sent to languish in atrocious zoos. Some are inserted into the murky world of the illegal wildlife trade. The reality is that the South African government fails to apply its strong regulatory powers and by design or neglect allows strikingly large numbers of animals to be exported“

There is the ‘legal’ mechanism permitted by the Convention on International Trade in Endangered Species of Wild Fauna and Flora (CITES) for the exportation of live wildlife specimens, under the pretext of for non-commercial “scientific research, captive breeding, public exhibition or performances, heritage conservation or other special purposes” (China’s Wildlife Protection Law loop-hole) and to “appropriate and acceptable destinations” (CITES),  when in reality such live specimen exports are fraudulently orchestrated to circumvent CITES restrictions with the export to supply commercial breeding facilities in China for TM production and/or that supply international laboratories with marmosets (for example) for vivisection.

The study finds  that the fraudulent exports for commercial gain by exporters linked to crime syndicates was extensive:

“…..between 2015 and 2019, 32 wild species from South Africa were exported to China. It lists 15 exporters and 41 importers, finding questionable listed information and permit violations in many cases. Of particular concern was the export of chimps and tigers listed in terms of the Convention on International Trade in Endangered Species of Wild Fauna and Flora or ‘CITES’ (not indigenous to South Africa), cheetahs, rhinos, lions, caracal, monkeys, giraffes,  and non-listed species such as wild dogs, hyenas and meerkats” – “A SPECIAL REPORT BY: The EMS Foundation and The Ban Animal Trading Organisation,” EMS Foundation, 17 May 2020

In 2019, the Environmental Investigation Agency found (“Stop the Slaughter – Close Domestic Rhino Horn Markets”) that there had been controversial live rhinoceros exports from South Africa to China (under the pretext of for non-commercial “scientific research, captive breeding, public exhibition or performances, heritage conservation or other special purposes” – China’s Wildlife Protection Law loop-hole) – these live rhinoceros have subsequently becoming ‘utilised’ for commercial purposes within Chinese pharmaceutical companies. From 2001, China has sought to establish their own private rhino farms to produce rhino horn for traditional medicine products. Based in Yunnan, China the Shilin Longhui Wildlife Research Center now houses more than 100 rhinos, at least 49 of which have been born at the facility.

Tigers are being bred within South Africa with no regulatory over-sight:

“Because they’re not an indigenous species, trade in tigers is unregulated and flying below the radar of the DEA (Department of Environmental Affairs). When asked about it by Ban Animal Trading and the EMS Foundation, the DEA response was that tigers weren’t the department’s responsibility because they’re “exotics”. In reply to a request for information on tiger breeding facilities, Limpopo DEA wildlife director Sam Makhubele said the department had never been approached and he seemed surprised that they even existed……

However, a 2015 TRAFFIC/WildCRU report, “Bones of Contention,” estimated there were at the time 280 tigers in 44 facilities in South Africa. Today there are undoubtedly far more, but because tiger breeding doesn’t have to be reported, numbers are hard to establish” – “Tigers are being bred in Gauteng backyards for petting and bone export,” Don Pinnock, Daily Maverick, 23 April 2018

Bans have lower transactional costs than regulations since less technical expertise is needed to enforce them. As the report also points out, bans send a clear message that this type of wildlife exploitation is no longer socially and ecologically acceptable. The EMS and BAT investigation makes another thing clear, illegal wildlife trade is not the only problem facing our world. The legal wildlife trade is just as problematic” – “EXPOSED: ILLEGAL WILDLIFE TRADE BOOMING THANKS TO LEGAL WILDLIFE TRADE,” Jared Kukura, J. 18 May 2020, EMS Foundation

“The Breaking Point: Could this report spell the end of SA’s wildlife trade?” IoL, 12 June 2020

“OUTCOME OF THE MEETING BETWEEN BAN ANIMAL TRADING SOUTH AFRICA, THE EMS FOUNDATION AND THE MINISTER OF THE ENVIRONMENT, FORESTRY AND FISHERIES,” EMS Foundation and Ban Animal Trading, 22 May 2020

“South Africa traffics thousands of endangered wild animals to China in ‘corrupt and growing’ trade, investigation finds,” The Independent, 17 May 2020