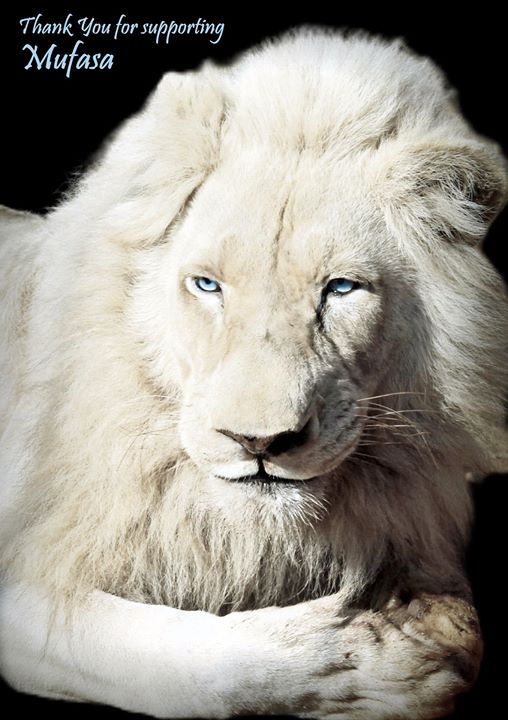 Petition – “Save Mufasa the white lion” -Care2Petition (at 644,804 signatures and rising)

The Republic of South Africa, North West – Department of Rural, Environment and Agricultural Development (DREAD – which seems like a fitting acronym) want to take Mufasa the white lion out of the Wild For Life sanctuary in Rustenburg, with the justifiable suspicion Mufasa will be up for auction to the highest bidder to recoup the North West DREAD’s legal costs – the fear is that Mufasa will most likely be sold off to be canned hunted and his skeleton/bones processed into South Africa’s abhorrent lion bone trade industry:

Wild For Life’s lawyer, Carel Zietsman suggested in 2018 that a magnificent white lion like Mufasa, would be prized as a hunting trophy, worth perhaps “$50,000 USD“

Why? Well, Mufasa’s story starts some time back, when he was confiscated by the North West DREAD and ‘rescued’ as a cub in 2015 from illegal ownership as a pet. Mufasa was put into the care of the Wild For Life sanctuary, owned by Dr. Tjitske Adriana Schouwstra, veterinarian and expert on wildlife rehabilitation.

The ensuing court case found Mufasa’s owner guilty of keeping a lion as a pet without authorisation, but for some inexplicable reason, the North West DREAD decided it wanted to sell Mufasa at auction, rather than let him be moved to an accredited Lion Sanctuary (from the rehabilitation facilities at Wild For Life).

Since that initial rejection, North West DREAD has needlessly pursued Schouwstra/Wild For Life sanctuary. In the meantime, Mufasa has formed a bond with another rescued lioness, Soraya at Wild For Life.

Schouwstra is reported (2018) to have agreed to send both Mufasa and his companion, Soraya to an accredited Lion Sanctuary, but North West DREAD refused and agreed only Soraya could be transferred – again, the suspicion being Mufasa would be sold as a good hunting trophy:

“These two Lions were supposed to be relocated from our rehab center to their forever home in an appropriate Lion sanctuary but the South African authority, instead of issuing relocation permits, wanted to sell Mufasa off on auction to generate money for the Department” – “White Lion Mufasa” – facebook page

Since then, it has been reported that officials stated “Mufasa would be sold to cover [their department’s] legal costs..” for their pursuit of Mufasa’s ultimate fate. For their part, Schouwstra/Wild For Life have incurred the costs of looking after Mufasa since 2015, without any assistance from North West DREAD.

Schouwstra has launched (June 2020) a fresh appeal (“Mufasa fund“) as the North West DREAD continues to pursue its ‘case’ for Schouwstra to hand over Mufasa to meet an uncertain fate at their behest, the last court case date having fallen victim to the national lockdown for Covid-19.

One thing is for certain in this whole sorry saga, pursuing the potential punishment of an innocent party, Mufasa to recover legal costs as a result of an illegal action by his original owner is foolish and petty, when Mufasa could be living a long and happy life in a Lion Sanctuary.

South Africa’s conservation image, which has been severely tarnished by the captive lion breeding/canned industry needs a good story, now more than ever – not another story of lion blood spilt for man’s vanity/profit. White lions are rare and need protection, not execution, with perhaps only 300 of Mufasa’s kind left in the world, 13 of which exist in the wild (“Mufasa, A Rare White Lion In South Africa, Is In Danger Of Being Auctioned Off To Trophy Hunters,” ATI, 19 November 2018):

One thought on “Mufasa, the innocent white lion”