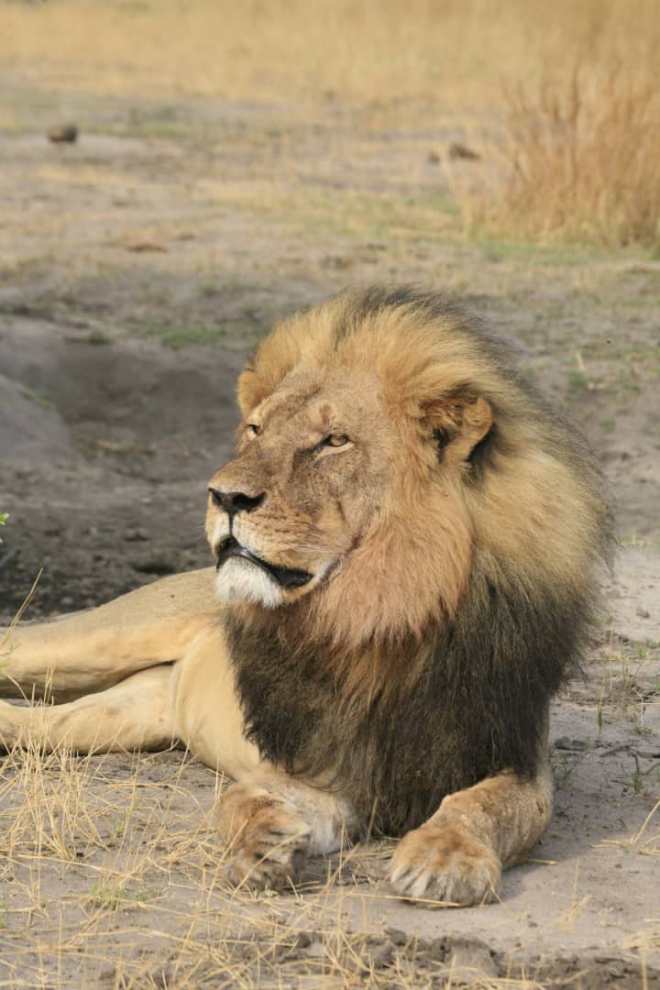 On the 5th anniversary of Cecil the lion’s torture and death, let’s hear him roar again and let’s roar for him (and all such wildlife persecuted in the name of ‘sports’ trophy hunting) – see social media material at the foot of this page.

Late on 1 July 2015, somewhere between 9pm and 11pm, Hwange’s famous tourist attraction, Cecil was lured (baited, so not a “fair chase” hunt) to his death in a bereft hunting concession from the protection of Hwange National Park, Zimbabwe by an American trophy hunting dentist, Walter Palmer and ‘Professional Hunter’ Theo Bronkhorst (Loveridge 2018):

“In media reports it was widely touted that Cecil suffered in agony for 40 hours. This claim is inaccurate and exaggerated. It’s unlikely he’d have lived that long with such a severe thoracic injury. However, he most definitely did not die instantly and almost certainly suffered considerably. Judging from the events described by Cornelius [Cornelius Ncube, the camp tracker] and the data sent by the GPS collar, the injured lion most likely was killed 10 to 12 hours after being wounded“

Regardless of the clear lack of any legitimate permit for Cecil to be lured from Hwange National Park to be tortured and executed in the Gwaai concession by Bronkhorst, Palmer, Ndlovu, none of these parties has ever been formally indicted for the wrong-doing – due to the cover-up, corruption and trophy hunting’s deceit (Loveridge 2018).

How does luring healthy, research collared lions to their death from a photographic tourism area support the hunters’ claims that their ‘sport’ conserves lion habitat not suitable for photographic tourism? There has been no explanation why luring a healthy male lion to be killed in an empty hunting concession can be justified by pro-hunting advocates as ‘conservation.’

“Until the lion has its own storyteller, tales of the lion hunt will always glorify the hunter” is often cited as a Zimbabwean proverb.

In the circumstances, perhaps this proverb should be updated to “Even when the lion has its own storyteller, tales of the lion hunt and corruption will always glorify (sic) and exonerate the hunters.”

Can one lion make a difference?

Taking a lion’s life for narcissistic pleasure makes a difference to the world – not just the negative impact on species’ conservation, but it holds a mirror to us all and asks can we allow such blood-lust attrition in today’s so-called environmentally conscious, ‘civilised’ society?

My answer is, such killings shame the whole of humanity…………..Cecil’s death accentuates humanity’s ‘Dark Triad’ – those amongst us with Machiavellian, narcissistic, psychopathic tendencies, callous and devoid of empathy that kill animals for pleasure and try to justify and excuse it (as ‘cultural,’ ‘man’s basic instincts,’ ‘always good for the world/conservation,’ a ‘hunter’s right’ etc.), when in reality it’s all too often about the hunter’s self-glorification and the satisfaction of a trophy hunter’s selfish ‘needs’ – “Trophy Hunting – A Psychological Perspective,” Beattie, G., 2020, Routledge 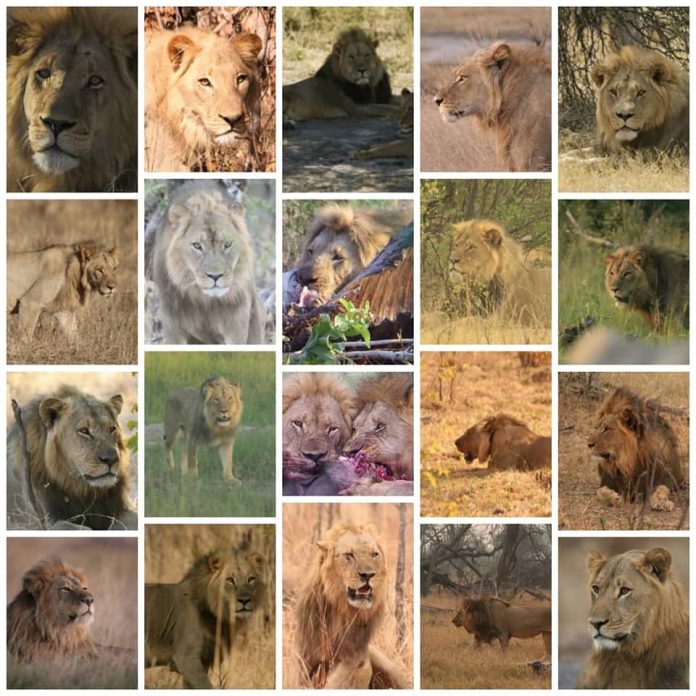 In 2017, another WildCRU study lion, Xanda (a pride male and son of Cecil), was targeted by trophy hunters – the lion was  lured from the protection of Hwange National Park in highly controversial circumstances (“Xanda – who is not telling the truth?“).

Yes, one lion’s plight has made a difference – Cecil has given iconic, majestic gravitas to the call to end man’s needless, callous attrition of wildlife for fun.

But it needs to be enshrined for all to see  – the United Kingdom’s hunting trophy import/export ban is long overdue….

We have joined with Animal Aid, Animal Defenders International, Ban Trophy Hunting, FOUR PAWS UK, Humane Society International – UK, Voice4Lions, Lion Aid, OneKind, Protecting African Lions,  RSPCA (England & Wales), World Animal Protection UK, and Zimbabwe Elephant Foundation, because because we believe our voices are louder when we work together, join us to take action in the UK and around the world.

Join our Facebook Event to join with others around the world. 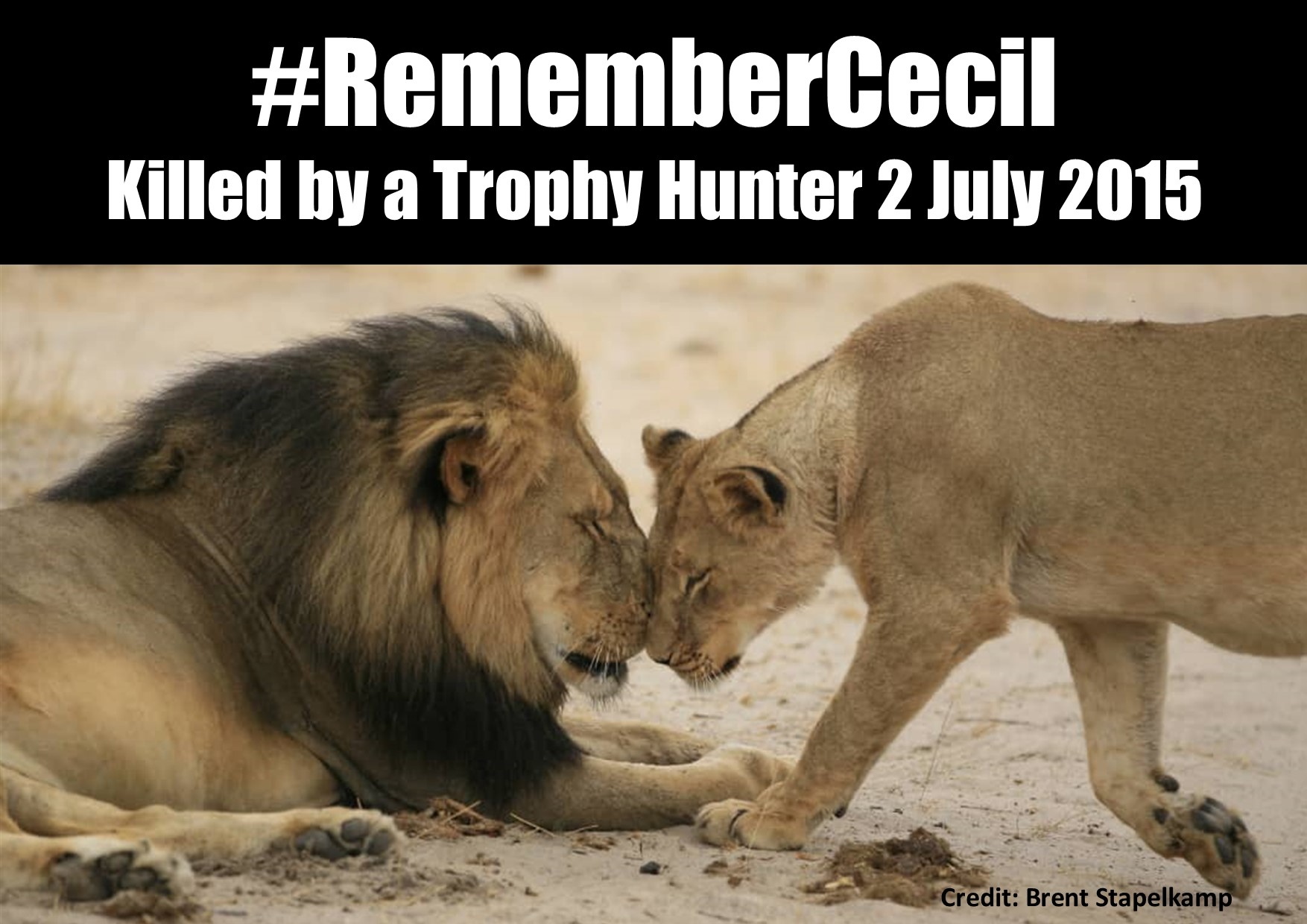 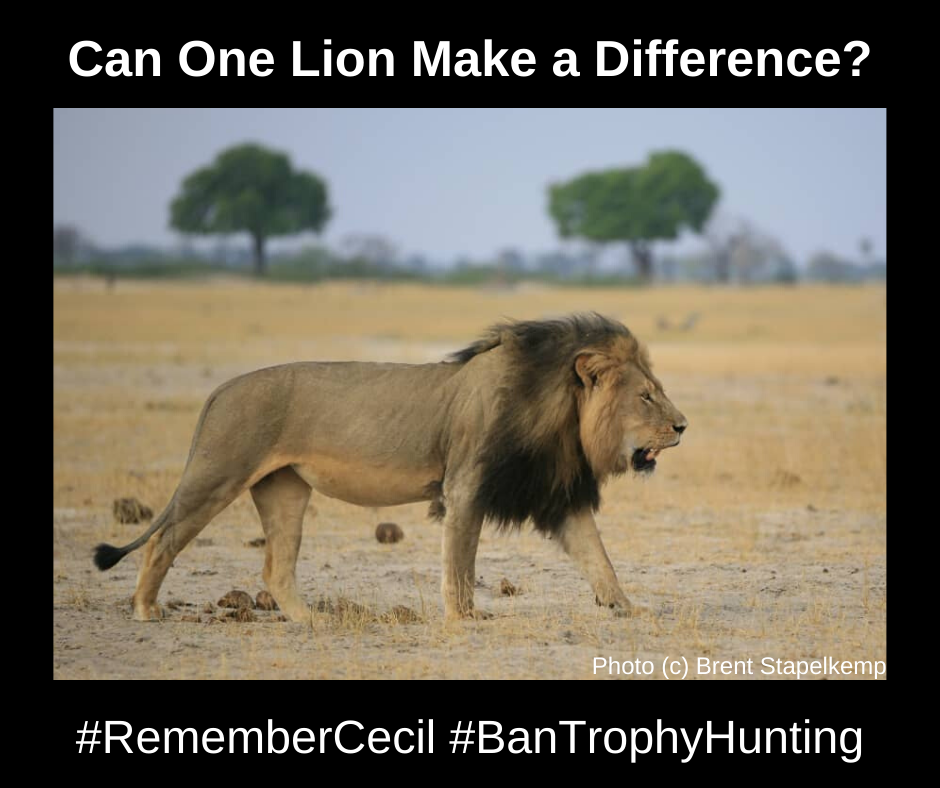 Steve Jones, the British president of SCI (Safari Club International), agrees canned hunting is a bad thing and ‘that would never happen in this country’ [except it does, in the form of game birds bred in captivity] and later on in the feature admitting that going after the biggest animals as trophies for the SCI record book is bad for species ‘I accept this warrants reconsideration, we need to change.’

Alex Goss, owner of the trophy hunting company Blackthorn Safaris, is under the delusion that he has  never promoted canned hunting, but regardless, there is no proven conservation value in wild lion hunting either (Goss trots out the mantra saying that trophy hunters only shoot the old and the weak – that simply is not true and the SCI’s own record books help prove it).  Goss essentially tries to say that hunting trophies are good for conservation (sic), but provides no proof. Goss is then asked if any species are off limits to the trophy hunter due to rarity, and replies that ‘the rarer the animal the more it can be worth, I don’t know how to answer that without it coming across badly.’ Goss goes on to suggest that killing an older wild tiger could be good because of the’ blank cheque’ income it could generate from trophy hunting, but provides no obvious link to how such income is guaranteed to conserve tigers and not be absorbed in profiteering, or diverted to other ‘needs.’ Hunting wild tigers does not counter the growing number of tigers being bred in captivity in appalling conditions to satisfy the hunters’ blood-lust and trophy collecting obsession  – when species’ attrition is legitimised by such muddled trophy hunting ‘logic.’

Neither Jones or Goss have any answers that substantiate the pro-hunting myths as anything more than self-delusion.